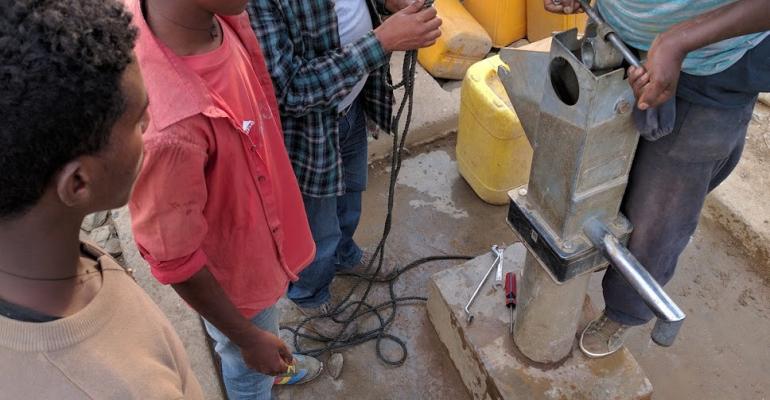 New design promises to deliver a rugged, automated, low-cost solution to rural communities that rely on wells as their only source of clean water.

In thousands of remote communities with no electricity and few resources, automated monitoring of water flow in hand pumps has long been a near-impossibility.

Now, however, that may be changing. A new sensor design promises to bring a rugged, automated, low-cost solution to rural communities that rely on wells as their only source of clean water. The new battery-powered design, now being employed on a hand pump in northern Ethiopia, measures flow through the pump and wirelessly transmits the pump’s data to an IoT site, where it can be monitored. Engineers hope it can serve as a model for countless more pumps in other locales.

“There are probably a billion people around the world who get their water from hand pumps,” said Christoph Gorder, chief global water officer for charity:water, a nonprofit organization that aims to bring clean water to people around the world. “This device has the potential to have an impact on their day-to-day lives.”

The new sensing system, designed by Intelligent Product Solutions (IPS) for charity:water, uses a capacitance technique to measure the flow of the water through a plastic housing inside the hand pump. The solution consists of a small printed circuit board containing the following: a Texas Instruments microcontroller; six capacitive sensors; a temperature sensor; a wireless transceiver; a GPS unit, a lithium battery; and a software algorithm that calculates the flow. During operation, water collects inside the plastic housing and the capacitive sensors “feel” the capacitance change through the plastic. As the water flows past the sensors one by one, the algorithm monitors the subsequent capacitance changes and then calculates the flow rate based on those changes.

“On a real-time basis, we sample two times per second and we use those results in our water sensing algorithm,” noted Robert Lieb, principal software engineer for IPS. “And we can tell, not only when the (sensors) are covered by water, but what percent of the (sensor) is covered by water. And that enables us to get more accurate flow measurements.” The software also uses air temperature data to make small adjustments in the calculated flow rate, Lieb said.

Data from the sensor is collected in the microcontroller’s on-board Flash memory. The unit’s transceiver sends the data to a 2G network, which forwards it to an IoT site. The IoT site can then record and report the amount of water extracted from a well over time. “We also have software that does trending to see if the flow rate has changed significantly over time,” Lieb said. “If it does, we turn the modem on and send a red flag message to alert people in the field to check it out.”

Lieb designed the unit to minimize the MCU’s power usage. Earlier versions of the technology used a smaller MCU with less RAM and were therefore unable to operate the software algorithm. By going to a bigger MCU with more Flash, Lieb said he was able to run a more comprehensive algorithm to do the flow calculations, and still keep power usage low enough to enable the unit’s lithium battery to last about five years.

Gorder said that the sensor is helping residents in the Ethiopian community by ensuring that any problems with the well get fixed in a timely manner. Such timeliness is critical for locals. “Prior to this, there was no effective solution,” he told us. “Most of the time, local communities would be on their own. If they ran into problems they couldn’t solve, the system would just stop working.”

Gorder’s organization, which installs wells in remote areas for communities that lack access to clean water, hopes to use the technology on more hand pumps. “There are so many pumps out there,” he said. “This is something that will serve as a foundation for other developments moving forward.”