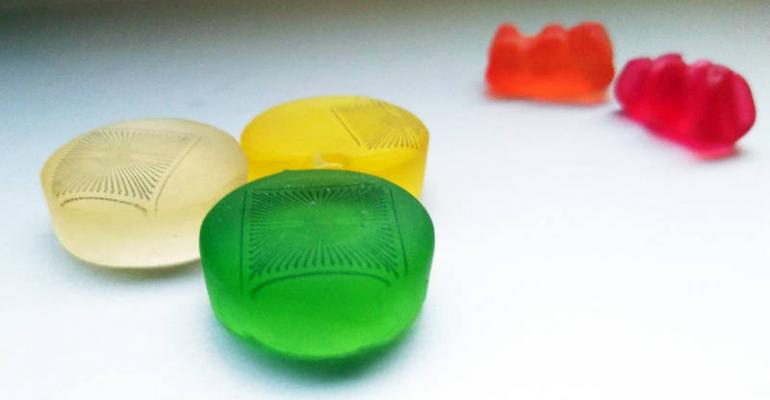 Researchers in Germany have used gummy bears not as a snack, but for printing microelectrodes onto soft materials for more biocompatibility in medical applications.

Though they are best known as a popular candy, gummy bears have found a different use as a transport for microelectrodes with increased biocompatibility, thanks to researchers from the Technical University of Munich.

A team there, collaborating with researchers at Germany’s Forschungszentrum Jülich Institute, has successfully used inkjet printing to attach microelectrode arrays to soft substrates including the gummy candies. This approach makes it easier than ever to use this technology in medical or biological applications, researchers said.

“Usually, microelectrode arrays are fabricated with optical lithography in the clean room, and we have for some time used clean-room fabricated devices for a variety of applications—including electrochemical sensing and stimulation of cells on a chip in vitro,” Bernhard Wolfrum, an assistant professor in electrical, electronic, and computer engineering at the university, explained to Design News.

These arrays can be used in numerous applications including, for example, to detect voltage changes resulting from activity in neurons or muscle cells to directly measure electrical signals in the brain or heart, he said.

However, while microelectronic sensors have been used for many years in medical and laboratory applications, they typically are made from hard materials, such as silicon. This is a disadvantage when they come into contact with living cells. In the body, for example, these hard materials can trigger inflammation or the loss of organ functionalities.

“As different applications require different designs—concerning both layout and materials—we have been looking for some time into simpler fabrication processes that can be easily adapted without the prior need of mask production,” Wolfrum explained.

Driven by an interest in developing a fast and cheap process for the rapid prototyping of a microelectrode array on soft hydrogels, researchers worked with a high-tech version of an inkjet printer to print the electrodes with carbon-based ink. To prevent the sensors from picking up stray signals, they used a neutral protective layer that they added to the carbon paths.

A gummy bear was just one of the materials used in the work. Others included polydimethylsiloxane, or PDMS, which is a soft form of silicon; agarose, a substance used in biology experiments; and various forms of gelatin, which included a gummy bear that was first melted and then allowed to harden.

“The technique allows us to rapidly fabricate different layouts of carbon-based microelectrode arrays on a variety of soft substrates—such as hydrogels—which is not easily done using conventional microfabrication,” Wolfrum said. “Furthermore, the printing approach makes it possible to readily modify the design layout without the prior production of lithography masks.”

The method developed by the team can be used beyond rapid prototyping in research. It could also change the way medical patients are treated by allowing for soft structures to be used to monitor nerve or heart functions in the body or even serve as a pacemaker inside the body, Wolfrum said.

“The possibility to quickly adapt the geometric layout of the interface and materials may help us to develop more efficient devices for cell stimulation and recording,” Wolfrum said. “Apart from this, one of the [other] aspects we are interested in is the development of printed 3D stimulation and recording devices that allow applications beyond the classical planar structures typically used in cell-culture experiments.”

Researchers published a paper on their work in the Nature journal Flexible Electronics.