HomeElectronicsProton Battery Could Offer Lithium Ion Alternative
Recent
Electronics
Q&A With IndyCar Gearbox Expert Anna Chatten
May 13, 2022
Intel Unveils Trust Authority to Boost Security
May 13, 2022
Supplier News Looks at Highly Customizable Industrial Monitors
May 12, 2022
Here Technologies Maps are Key to Mercedes Level 3 Automation
May 12, 2022
POLL
'We Built the Domino's Pizza Tracker for Manufacturing'
May 12, 2022
Break Your Bubble Gum Habit by Watching Its Production
May 12, 2022
This Patch Monitors All Your Vitals, Including Blood Pressure
May 12, 2022
First E-Skin to Anticipate, Perceive Touch from All Directions
May 12, 2022 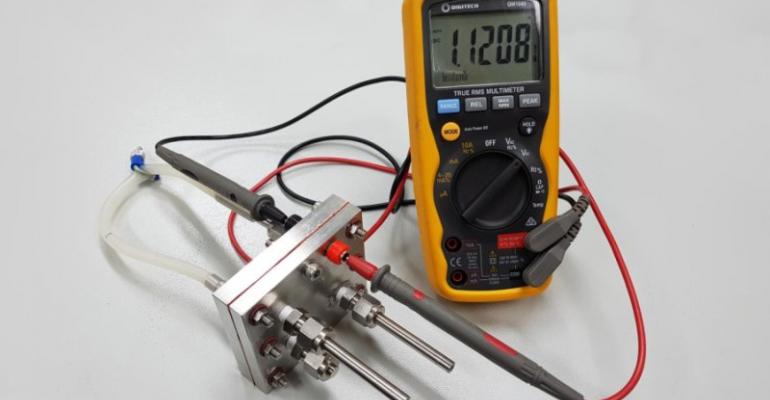 A traditional proton exchange membrane (PEM) hydrogen fuel cells uses platinum catalysts to combine gaseous hydrogen and oxygen from the atmosphere to produce electricity, water vapor, and heat. Producing, transporting, and storing hydrogen gas, however, have proven to be speed bumps on the road to adoption of fuel cells in the mainstream transportation sector.

RMIT University in Melbourne, Australia has announced a new a “proton battery” that eliminates those speed bumps by producing hydrogen ions (using catalysts) from water and electricity inside the battery and storing them in a special electrode during the charging process. During discharging, the hydrogen ions are released from the storage electrode and combined with oxygen to form water and generate electricity. The new experimental proton battery has achieved an energy density on par with today’s commercially available lithium ion batteries.

Previously, Professor John Andrews, from RMIT, had proposed in 2014 a new kind of battery that was part hydrogen fuel cell and part traditional battery, Andrews called his invention a “proton flow battery” and built a working prototype battery that proved the concept. But the metal hydrides he used resulted in a cell that suffered from low rechargeability and hydrides that contained rare-earth elements that were both heavy and expensive.

In the latest version, now called a proton battery, a porous activated-carbon electrode made from a phenolic resin replaces the metal hydride from the 2014 version as the hydrogen storage electrode—the new version is cheaper, lighter, and performs better.

The latest research work was published in the International Journal of Hydrogen Energy, where it was reported the new carbon electrode was able to store nearly 1% (by weight) of hydrogen in charge mode and release 0.8% (by weight) during the fuel cell electricity supply mode.  The voltage produced was 1.2 volts.

“Future work will now focus on further improving performance and energy density through use of atomically thin layered carbon-based materials such as graphene, with the target of a proton battery that is truly competitive with lithium ion batteries firmly in sight,” Andrews said in the RMIT press release.

There are concerns that future production of lithium ion batteries for both electric vehicles and electricity grid storage may be constrained by availability of lithium and metals such as cobalt used in their manufacture. Although the proton battery described by the RMIT uses small amounts of platinum as a catalyst (as do fuel cells), the remaining materials have a relatively low cost and are readily available. If the proton battery can produce equivalent results to current lithium battery technology, it could be a contender.

At the same time, it can be misleading to judge potential performance of battery technology from small experimental cells, and commercialization of the proton battery seems a long way off. But the use of lower cost, readily available carbon to store hydrogen ions is a nevertheless a breakthrough and a promising step.