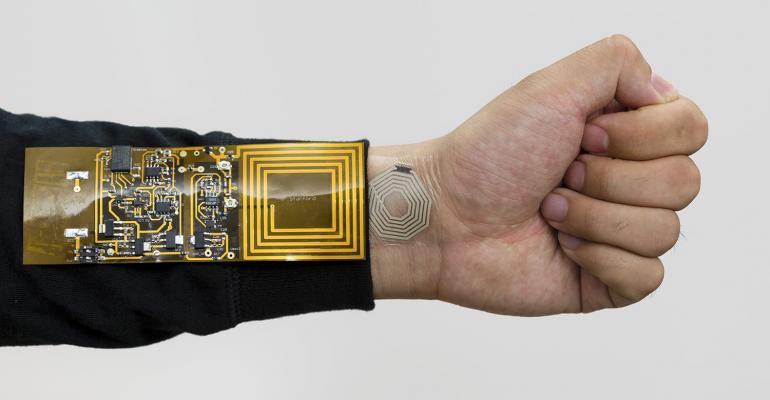 Researchers at Stanford University have developed a thumbnail-sized, flexible lithium-ion device that could power sensors and other small devices.

Researchers have designed a new stretchable battery for wearable electronics that they said can store power safely even when bending to conform to natural movements of the human body.

A team at Stanford University led by Chemical Engineering Professor Zhenan Bao and Professor of Materials Science and Engineering Yi Cui developed the device using a special type of polymer for storing power in solid form. “Until now we haven’t had a power source that could stretch and bend the way our bodies do, so that we can design electronics that people can comfortably wear,” Bao said.

The new battery potentially could be used an ongoing project by Bao and his team to develop a wearable technology that sticks to the skin like Band-Aids to send wireless readings about human health and vital signs to a receive clipped onto clothing. The device, called BodyNet, currently has an antenna that harvests the incoming RFID energy from a receiver on the clothing to power its sensors, which takes readings from the skin and beams them back to the nearby receiver.

However, while many small sensors like this are harvesting their own energy for power, some require more stored energy to perform complex data collection and transmission. This type of power currently is mainly derived from bulky batteries that simply don’t work in this type of form factor. The new battery developed by Bao and Cui is based on a new solid polymer rather than a more gel-like plastic currently used as an electrolyte in some lithium-ion batteries. The problem with a more liquid material is that it can potentially leak from the battery, causing corrosion that creates flammability.

Researchers already have used solid electrolytes in lithium-ion batteries for this reason; however, typically they are made of ceramic, which offer high ionic conductivity, but are brittle and difficult to implement, the team wrote in a paper on their work published in the journal Nature Communications. Since brittle materials won’t really cut it for wearable electronics, which must bend and stretch, using polymer—which is typically less conductive but can still carry an electric charge between the battery’s poles—was a fair compromise.

The team did acknowledge that they used several key polymer engineering strategies to “avoid the canonical trade-off between ionic conductivity and mechanical properties in polymer electrolytes,” they wrote in the paper. “The most eminent strategy is based on a polystyrene(PS)-polyethylene oxide(PEO) block copolymer, in which the PS block provides mechanical strength and the PEO block provides ionic conductivity,” researchers wrote. “Other strategies include nanoscale-phase separation,, crosslinking with hairy nanoparticles, addition of ceramic fillers.”

Researchers reported that in lab tests, the experimental battery—which is thumbnail-sized--maintained a constant power output even when squeezed, folded, and stretched to nearly twice its original length. The team has some research ahead to create a battery that’s on par with conventional batteries, however.

Currently, the prototype battery stores about half as much energy, ounce for ounce, as typical batteries. Researchers aim to increase the stretchable battery’s energy density, build larger versions of the device, and run future experiments to demonstrate its performance outside the lab.