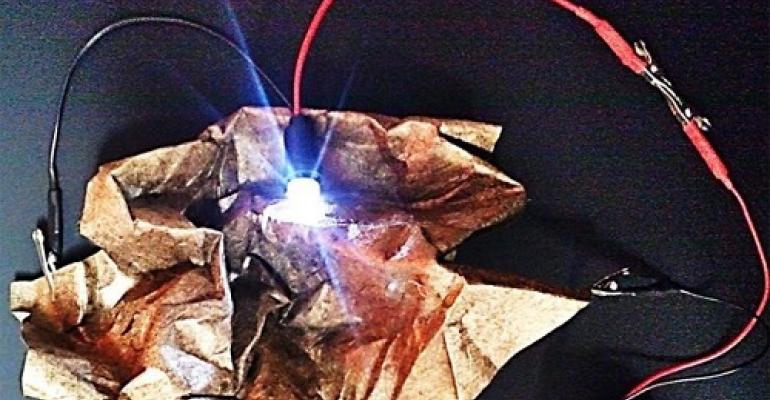 Researchers from the Georgia Institute of Technology and Korea University have developed a flexible and inexpensive-to-fabricate paper-based supercapacitor that could be used to help power wearable and IoT devices.

Paper is poised to be the next key material for developing flexible energy sources for next-generation wearable devices thanks to an international team of researchers from the United States and South Korea.

Researchers from the Georgia Institute of Technology—collaborating with scientists from Korea University—have developed a flexible and inexpensive-to-fabricate paper-based supercapacitor that could be used to help power biomedical and fitness wearables, sensors to power the Internet of Things (IoT), and myriad other devices.

“Flexible energy storage devices are a key enabling factor for the propagation of wearable or paper electronics in biomedical, consumer electronics, and military applications,” said Seung Woo Lee, an assistant professor in the Woodruff School of Mechanical Engineering at Georgia Tech, who led the research. “In this work, we demonstrated high-performance, flexible energy storage devices based on the paper substrates.”

Paper and textile substrates have been considered ideal materials for energy sources for wearable tech due to their low cost, flexibility, and highly porous structures—which can absorb active electrode materials, he told Design News. However, one limitation has been that these substrates must be coated with electrically conductive materials due to their insulating nature to generate electricity.

Supercapacitors commercially are not as widely used as batteries because while they have high power density, they often have low energy density—which means they charge fast and have long lifecycles, but can’t store as much energy as batteries per unit weight. The goal of the team in their work was to boost the energy density of the supercapacitors while maintaining their high power output.

“This approach can convert the insulating paper to highly porous metallic paper with large surface areas that can function as current collectors and nanoparticle reservoirs for supercapacitor electrodes,” he explained. “In addition, we demonstrate that the alternating structure design of the metal and pseudocapacitive nanoparticles on the metallic papers can remarkably increase the areal capacitance and rate capability with a notable decrease in the internal resistance.”

The team estimated that the maximum power and energy density of the metallic paper-based supercapacitors are 15.1 mW·cm2 and 267.3 μW·h/cm2, respectively, Lee said. Moreover, in testing the devices fabricated using the technique could be folded thousands of times without affecting conductivity.

While the supercapacitor as designed is flexible, it’s not stretchable, Lee said. As part of its continued work, the team plans “to design the stretchable energy storage devices,” he said.

To do this, researchers will test their fabrication technique on flexible fabrics, as well as to develop flexible batteries that could work with the supercapacitors.

They also aim to find less expensive metals such as silver and copper to replace the gold nanoparticles used in their initial work to reduce the cost of fabrication, Lee said.