Organic Proton Battery can be Charged in Seconds 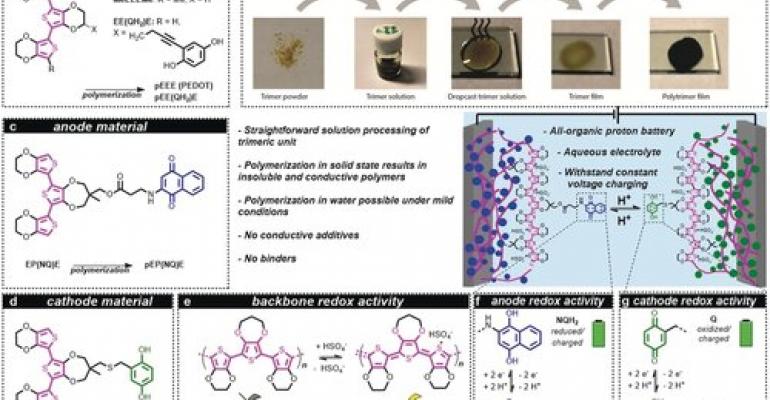 Researchers envision the device can one day be a sustainable option to lithium-ion batteries.

Waiting for a battery to charge once it’s depleted is still a big hassle for mobile-device users, especially in these days when smartphones have become a ubiquitous part of everyday life.

Researchers at Uppsala University have developed an all-organic proton battery that could solve this problem by charging in a matter of seconds.  Moreover, the battery can charge more than 500 times without any significant loss of capacity, and use a solar cell for charging rather than needing to be hooked up to a typical wired electronic charger.

The battery, made from organic materials rather than the metals that comprise lithium-ion chemistries, could provide a breakthrough in developing an environmentally friendly and sustainable source of energy for electronic devices and even potentially electric vehicles (EVs), said Christian Strietzel of Uppsala University’s Department of Materials Science and Engineering.

“The point of departure for our research has been to develop a battery built from elements commonly found in nature and that can be used to create organic battery materials,” he said in a press statement.

Lithium-ion batteries have served commercial electronics market well as the de facto standard. But they have a high impact on the environment due to the necessity to mine the metals needed to create them, as well as have other dangers that have encouraged scientists to seek alternatives.

Researchers used organic carbon compounds called quinones that are found abundantly in nature—such as in photosynthesis--as the battery’s active material, they said. These materials are well-suited to their task because they can absorb or emit hydrogen ions—which contain only protons—during charging and discharging.

As the electrolyte, the team used anacidic aqueous solution that is not only non-toxic, but it also eliminates any danger of catching fire or exploding, as some lithium-ion batteries can do after some degradation, the team noted.

Perhaps one of the most interesting characteristics of the battery is that it is unaffected by ambient temperature, Strietzel said. This is unlike standard batteries, which show a performance decline at lower temperatures, he said.

“We have demonstrated that this organic proton battery retains properties such as capacity down to as low as -24°C,” he said in a press statement.

The team published a paper on their work in the journal Angewandte Chemie.

Researchers plan to continue their work to develop and improve the battery, Streitzel said. While they have a long way to go before the will be ready for commercial development, it shows promise for replacing battery designs that have significant environmental impact with more sustainable ones, he said.