NXP, Microsoft Team Up on New Processor for IoT Security 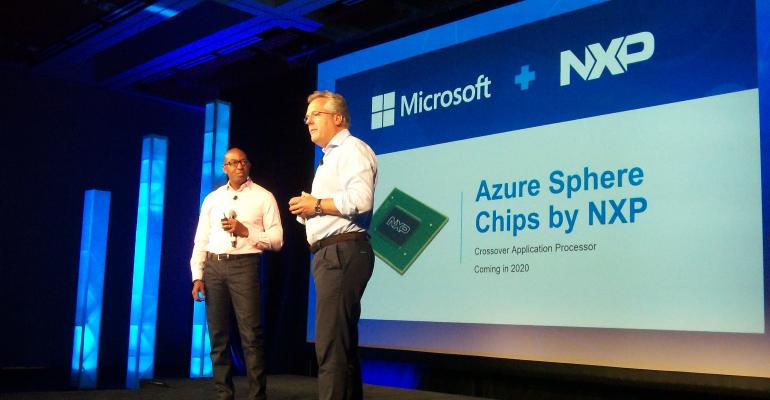 Azure Sphere-certified processor could be used in smart buildings, appliances, and factory automation.

NXP Semiconductors N.V. last week announced it is teaming with Microsoft Corp. to roll out a processor that promises to beef up the security of IoT applications, ranging from white goods to smart buildings to factory automation systems.

The Microsoft Azure Sphere certified applications processor, due out in the fourth quarter of 2020, will deliver “end-to-end security” to IoT edge devices, starting from the silicon and going all the way to the cloud, the two companies said. “It doesn’t matter what the device is, security is going to be super-important,” Ken Woodberry, deputy managing director of Azure Sphere for Microsoft, told Design News. “So any IoT application will be fair game for this.”

Built atop NXP’s i.MX 8 family, the processor will be based on the Arm Cortex-A35 architecture and will be available in versions with one or two cores. It will also feature a graphics processor and a DSP core for audio, making it suitable for image and voice recognition applications.

Woodberry said the demand for such a product has been rising in the wake of denial-of-service attacks such as the 2016 Mirai botnet attack, in which millions lost access to Twitter, Spotify, Reddit, and CNN. “We make the argument that even Internet light bulbs, directly connected to the Internet without any proper security, could be taken over and used as a botnet to take down major websites,” he said. “We’ve seen it happen more than once.”

A dedicated applications processor with on-board security is critical to defending against such security breaches, Woodberry said. He cited a technical paper, The Seven Properties of Highly Secure Devices, which calls for a “hardware-based root of trust” to be the first line of defense against such attacks. “You have to have a root of trust that stores the private keys and does the encryption,” he told us. “And it has to be done on the hardware side, so there’s no way a malefactor on the software side can get into it.” The Pluton security sub-system on the new application processor would serve as a such a “root of trust,” he said.

Microsoft foresees the new application processor serving in smart homes, smart commercial buildings, and consumer appliances, such as washers, dryers, ovens, refrigerators, lawn mowers, and vacuum cleaners. “There’s a big push right now for consumer manufacturers to turn their products into IoT devices,” Woodberry said. “And the trend of putting appliances online is where this will play a role.”

An application processor, rather than a simple MCU, is key for such applications because it typically contains the necessary video and audio processing capabilities, Woodberry added.

The enhanced security that’s inherent in the new processor could also make it well-suited for factory automation applications. Today, many manufacturers isolate their factories from the Internet, for fear of security issues, Woodberry said, but that needn’t always be the case. “If they could connect to the Internet, they could get advantages like predictive maintenance,” he told us. “But they will only do it if can be done very securely.”

The new application processor isn’t the first to feature Azure Sphere certification. Microsoft has previously collaborated with MediaTek on the MT3620, and it plans to team with more silicon vendors in the future. For now, however, the NXP collaboration gives Microsoft broader access to the IoT, and possibly even to the automotive market.

“The total addressable market of products that can use Azure Sphere is now going to go up because of this NXP chip,” Woodberry said.