Nvidia Plans to Be a Force Behind Level 5 Autonomous Vehicles 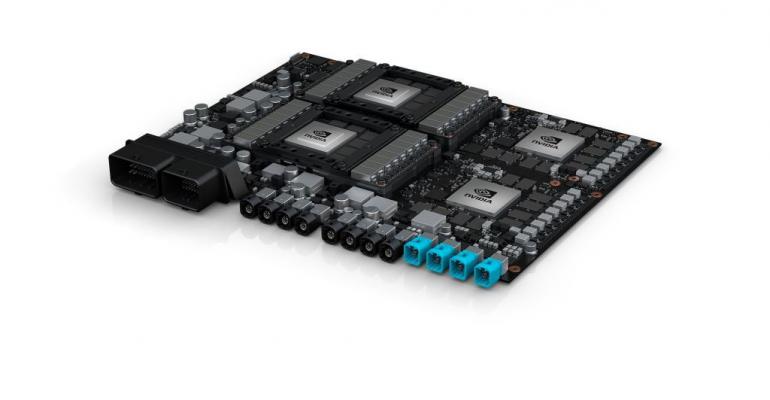 Nvidia's new Drive PX Pegasus AI computing platform is the size of a license plate, but powerful enough to control level 5 autonomous vehicles. And it's part of Nvidia's plan to be part of all levels of autonomous vehicle development, from design up.

Nvidia wants to be figuratively and literally under the hood of level 5 autonomous vehicles. The graphics chip maker has unveiled a series of new product developments – all targeted at or applicable to autonomous vehicles, and aimed at showcasing its move into the automotive space.

Nvidia is attempting to leapfrog straight into level 5 autonomy with the release of its new Drive PX Pegasus, the latest in its series of Drive PX AI computing platforms. The company calls Pegasus, “The world's first artificial intelligence computer designed to drive fully autonomous robotaxis.”

During a press briefing Jensen Huang, Nvidia founder and CEO said that with Pegasus Nvidia's goal is to enable the development of vehicles that can function without drivers, steering wheels, pedals, or mirrors ... essentially functioning as a mobile office or living room." Driverless cars will enable new ride- and car-sharing services,” Huang said. “New types of cars will be invented, resembling offices, living rooms, or hotel rooms on wheels. Travelers will simply order up the type of vehicle they want based on their destination and activities planned along the way. The future of society will be reshaped.”

Nvidia believes its GPU technology is up to the challenging demands of level 5 autonomy, which will require high-res, 360-degree cameras as well LIDAR and an array of sensors for positional tracking, GPS, and keeping the vehicle aware of its environment as well as its passengers and pedestrians. Huang said the computing requirements of level 5 driverless vehicles are 50 to 100 times those of the most advanced cars on the road today.

The Drive PX Pegasus has a performance of over 320 trillion operations per second and is about the size of a license plate according to company specs and would replace all of the computing equipment seen in current level 5 prototypes, which takes up about the entire trunk space of the car, Huang said. “In the old world, the more powerful your engine, the smoother your ride will be,” Huang said. “In the future, the more computational performance you have, the smoother your ride will be.”

In conjunction with the Pegasus, Nvidia has also released a software development kit (SDK) – Nvidia Drive Intelligent Experience (IX) – to allow developers to program functions around self-driving vehicles including sensor fusion, facial recognition, and passenger monitoring. The SDK is expected to open for early access in the fourth quarter of this year.

Finally, Nvidia announced that Holodeck, its VR collaborative work environment announced back in May, is finally opening for early access. While the company has said that Holodeck has a wide range of applications, early demonstrations have leaned heavily on its automotive design applications. Powered by Nvidia's graphics technology, Holodeck presents a virtual prototyping environment that delivers real-world scale and accuracy along with low enough latency to allow for seamless remote collaboration among design and engineering teams.

Nvidia said it has 225 partners currently developing technologies on some version of the Drive PX platform, with 25 of those partners working on level 5 autonomous vehicles. During Nvidia's GPU Technology Conference (GTC) in Munich last week German postal delivery company Deutsche Post DHL Group (DPDHL) announced that it is partnering with German auto parts maker, ZF Group, to deploy a test fleet of delivery trucks outfitted with Drive PX technology some time in 2018.

DPDHL said the testing will cover both long haul and the "last mile" of deliveries, the most complex and expensive part of deliveries, wherein a package is moved from a local distribution center to its final destination. The system, the ZF ProAI self-driving system, can be implemented into DPDHL's existing fleet of 3,400 StreetScooter electric delivery vehicles along with cameras, LIDAR, radar, and other sensors provided by ZF Group to create fully autonomous vehicles. DPDHL and ZF Group already have a prototype vehicle and DPDHL said it has already configured its data center with the Nvidia DGX-1 AI supercomputer for training neural networks for autonomous vehicles. Once ready, the deep learning algorithms can be ported onto the ZF ProAI and function as the brain of the system.

"Creating a fully self-driving car is one of society's most important endeavors -- and one of the most challenging to deliver,"said Huang. "The breakthrough AI computing performance and efficiency of Pegasus is crucial for the industry to realize this vision.”