HomeElectronicsNovel E-Textile Powers Electronics, Protects Against Bacteria
Recent
Electronics
Halloween? What a Perfect Time to Think About Generating Electricity From Blood!
Oct 27, 2021
Ghosts of Medtech: What Ever Happened to These 7 Medical Devices?
Oct 27, 2021
How to Survive a Zombie Apocalypse
Oct 27, 2021
America's Supply Chain Crisis by the Numbers
Oct 27, 2021
POLL
Want Scary Stuff for Halloween? Check out the Tech for 2021
Oct 27, 2021
How Apple Influenced Medical Packaging
Oct 27, 2021
AAA Finds that ADAS Sensor Vision Permits Crashes 33 Percent of the Time in the Rain
Oct 27, 2021
What Do SAE Automated Driving Levels Mean Anyway?
Oct 27, 2021 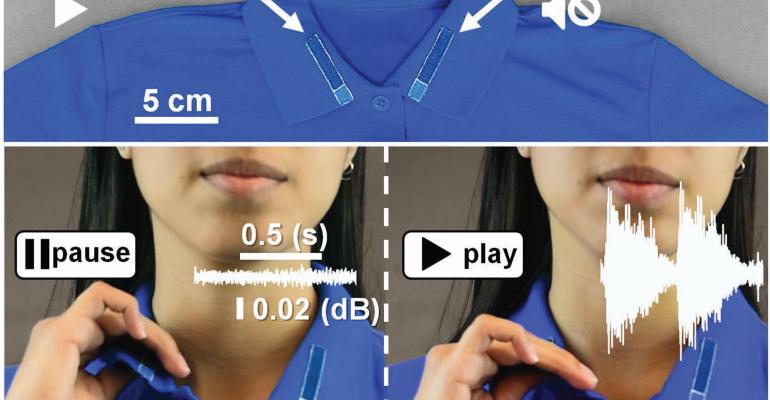 Researchers at Purdue University have developed a new smart textile that they said can keep your phone charged and also help prevent you from catching a virus.

What if your clothes could charge your mobile device and keep you from catching a cold? That’s the promise of new fabric with both electricity-generating and bacteria-protection properties, researchers said.

A team at Purdue University has developed the new smart textile, which is based on what are called omniphobic triboelectric nanogenerators (RF-TENGs), researchers said. The generators use simple embroidery and fluorinated molecules to embed small electronic components that enable clothing to power devices, they said.

Ramses Martinez, an assistant professor of industrial engineering and biomedical engineering at the university, likened the smart textile to having a wearable remote control that also repels odors, rain, stains, and bacteria.

“It is the first time there is a technique capable to transform any existing cloth item or textile into a self-powered e-textile containing sensors, music players, or simple illumination displays … without the need for expensive fabrication processes requiring complex steps or expensive equipment,” he said in a press statement.

TENGs are proven energy-harvesting technology that use the same principle as static electricity—fabrics rubbing against each other—to generate an electrical charge. Researchers already have developed myriad devices using this principle to harvest energy for smart clothing and other devices that would benefit from being powered without a battery.

To develop the fabric, researchers combined embroidery with a spray-based deposition of fluoroalkylated organosilanes and highly networked nanoflakes to incorporate the RF-TENGS into fiber-based textiles to harvest energy from the natural motion of the person wearing them, researchers said in an abstract for a paper published about their work in the journal Advanced Functional Materials.

The RF-TENG technology developed by the team has a number of benefits that make it viable for production of textiles on a wide scale, researchers wrote. The generators are thin, flexible, and can breathe, with air permeability of 90.5 millimeters per square inch, they wrote in the abstract.

They also can produce a high power density of 600 microwatts per square meter—enough to keep mobile devices powered all day on the go, researchers said. Moreover, in initial tests of the fabric showed stability even after machine washing and exposure to the general stress of mechanical deformation typical of clothing that’s worn and washed repeatedly, they said.

One aspect of the textile that makes it especially well-suited for use in wearable human-machine interfaces is its high sensitivity to touch, Martinez noted.

“Having an interface with a machine that we are constantly wearing sounds like the most convenient approach for a seamless communication with machines and the Internet of Things,” he said in the statement.

Researchers currently are patenting the technology and seeking partners to help them further test and commercialize it, they said.