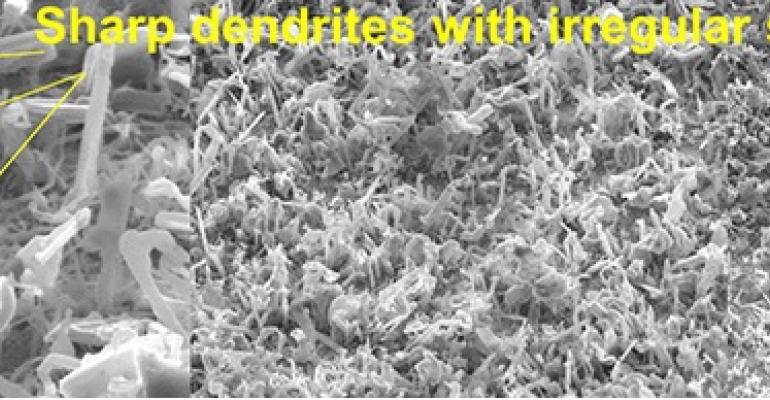 Battery researchers around the world are examining electrolyte chemistry, battery charging protocols, increases in battery internal pressure, and coatings on the surface of the lithium metal, all in an effort to inhibit dendrite growth and make lithium metal batteries safer. One group at Arizona State University, under Hanqing Jiang, professor in ASU’s School for Engineering of Matter, Transport and Energy, has published a paper in Nature Energy that describes the effects of stress on the growth of lithium dendrites.

The ASU researchers deposited a layer of lithium metal onto a soft substrate of polydimethylsiloxane (PDMS), more commonly known as the silicon material from which contact lenses and silly putty are made. In a press release published by ASU, Jiang said, “We already know that tiny tin needles or whiskers can protrude out of tin surfaces under stress, so by analogy we looked at the possibility of stress as a factor in lithium dendrite growth.”

When the lithium metal was deposited on the silicone substrate, the stresses created by the accumulation of the metal were relieved by the formation of wrinkles in the silicon substrate. The elimination of the residual stresses had a large effect on the dendrites. “There were remarkable reductions in dendrite growth,” said Jiang. The research team discovered that the reduction in dendrite growth was directly related to the reduction in stress caused by the deformation and wrinkling of the silicon substrate.

Jiang’s team also came up with a way to increase the life of lithium metal batteries while maintaining their high energy density—by giving the silicone a three dimensional form, almost like a sponge. “The PDMS, which serves as a porous, sponge-like layer, relieves the stress and effectively inhibits dendrite growth,” said Jiang.

The ASU research also has implications for other types of batteries. “Almost all metals used as battery anodes tend to develop dendrites. For example, these findings have implications for zinc, sodium and aluminum batteries as well,” said Jiang.

The low cost of flexible silicone materials and their potential to improve the performance of lithium metal anodes by reducing stress and thus dendrite formation is just one more step in the development of safe, high energy density lithium metal batteries.