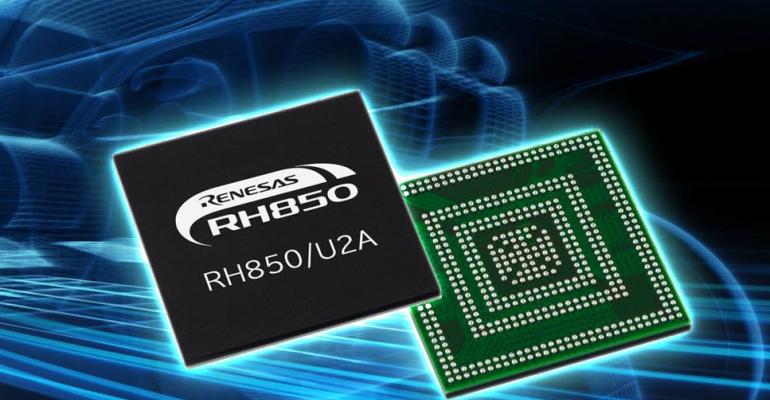 Body and chassis applications could run concurrently, without interference, on a single device.

A new automotive microcontroller (MCU) is said to be the first of its kind to incorporate virtualization into the hardware, enabling engineers to control multiple vehicle applications with a single device.

The 32-bit RH850/U2A from Renesas Electronics Corp. could serve in a wide variety of automotive systems, such as steering, braking, window lifts and climate controls, which have typically used their own dedicated electronic control units (ECUs) up to now. By doing so, it could enable developers to employ the same basic underlying software, such as the operating system and hardware drivers, to build the various automotive applications into one chip.

“That’s a benefit for the customer,” noted David Kraft, a staff engineer for the Renesas hardware team. “If you have the same device and the same basic software, then you only have to develop it once.”

The key to those capabilities is the so-called “virtualization.” In virtualization, a portion of the hardware is committed to each user, allowing multiple “virtual machines” to run concurrently without interference.

Integrating multiple functions onto a single device represents a departure from the way automotive features have been developed, Renesas said. “In the past, we always had separate ECUs for separate functions,” Kraft told us. “So you had one ECU for the window lifts, for example, and another for the brakes.”

Integrating them could be a big step forward for automakers and Tier One suppliers, Kraft said. For more than a decade, manufacturers have been trying to find ways to reduce the number of ECUs, which has in some extreme cases climbed to more than 150 per vehicle. By controlling more functions, a “virtualized” MCU could help accomplish that, thus reducing associated cost and complexity.

In developing the new MCU, Renesas took elements from its existing P-line family of MCUs and combined them with elements from its existing F-line family of devices. The P-line had typically been employed in chassis and safety applications, while the F-line served in body control systems. “We took the best of both worlds and integrated them from a hardware point of view into one device,” Kraft said.

To accommodate the different safety requirements needed for body and chassis functions, the new product incorporates a so-called “hypervisor.” The hypervisior enables chassis applications, which may have ASIL-D (high-level) safety ratings, to run concurrently with body control functions, which may use ASIL-B. “The hypervisor allows you to separate your application software,” Kraft said. “It’s still on the same hardware, and still uses the same operating system, but you can separate your ASIL-D functionality for the chassis from your ASIL-B for the body applications. Essentially, you have two virtual machines.”

Up to now, no automotive MCU with embedded flash has incorporated such capabilities, Kraft said. But Renesas was able to accomplish it with the RH850/U2A, largely on the strength of computing power. The new device incorporates up to four 400-MHz CPU cores, along with up to 16 megabytes (MB) of flash ROM and 3.6 MB of SRAM.

For users of the new device, the bottom line will be simplicity, Kraft said. “In the end, it’s a matter of cost,” he told us. “It will shorten their development time, and that will save money for them.”