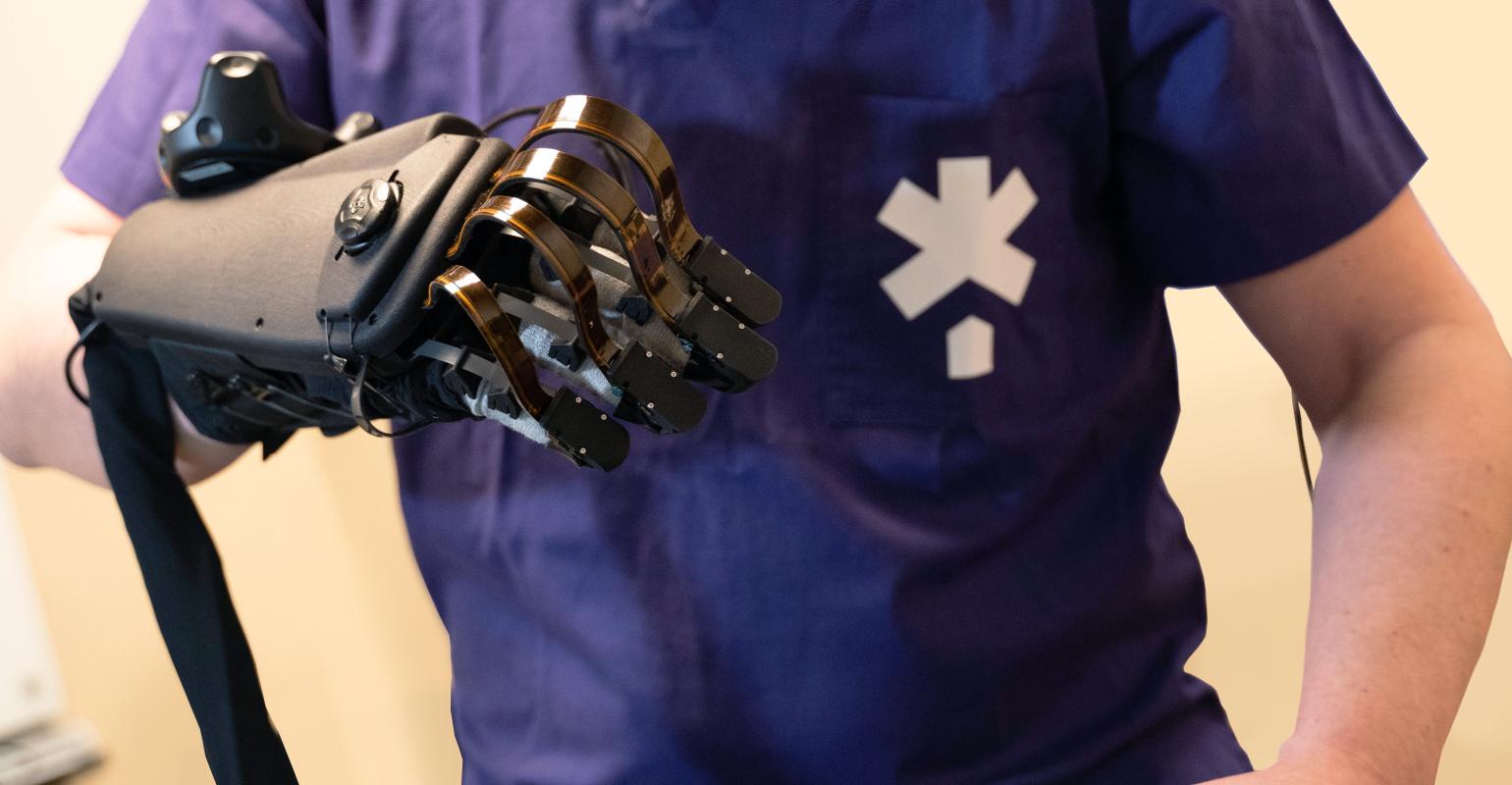 <p><strong>Fundamental Surgery</strong></p><p>A good deal of work is being done in the area of applying VR to medical training. But London-based <a href="https://www.designnews.com/design-hardware-software/inside-hp-reverb-how-hp-went-all-on-enterprise-vr/165875672961348" target="_blank">Fundamental VR</a> is adding a new dimension to VR for medical training by developing systems that also offer haptic feedback to users. Through a partnership with Seattle-based HaptX, a maker of innovative haptic gloves, Fundamental VR is currently deploying systems that allow for realistic touch interactions in virtual training environments in medical institutions all over the world.</p><p><em>(Image source: Fundamental Surgery)</em></p>
FundamentalVR and HaptX have partnered to create a VR training solution that gives surgeons the real-world feel of surgical instruments and procedures.

Virtual surgical training is getting an extra layer of immersion that will let trainees actually feel what they're doing.

London-based Fundamental VR, makers of a VR training solution called the Fundamental Surgery platform has announced that HaptX Gloves will now be implemented into the platform to provide users with a sense of touch as they navigate medical training simulations.

“When it comes to surgical training simulations, a sense of touch is a game changer, but has traditionally only been possible with immobile equipment costing hundreds of thousands of dollars,” Richard Vincent, CEO of FundamentalVR, said in a press statement. “The Fundamental Surgery platform delivers highly sophisticated tactile feedback at a fraction of the cost through a software approach that can work with a range of haptic devices...”

Rather than a self-contained solution, FundamentalVR's solution, branded as a “flight simulator for surgeons” is designed to be equipment agnostic – meaning it is compatible with any VR headset and PC or laptop capable of running VR applications. FundamentalVr said its system is designed to evolve as new hardware innovations, such as the HaptX Gloves hit the market.

Seattle-based HaptX's glove technology uses a combination of microfluidics and force feedback to provide a sense of the shape, feel, and weight of an object that the company says approximates the real world.

Traditionally haptic technology has relied on precise vibrating motors, not unlike what you might find in your smartphone or a vibrating video gaming peripheral such as a gun or force feedback controller. The drawback to this is that vibration alone doesn't provide the sense of realism that is needed in applications such as healthcare or industrial training that require a high degree of accuracy.

Each HaptX Glove contains an array of 130 panels made of a “microfluidic skin” that HaptX says is a flexible, silicone based material embedded with pneumatic actuators and microfluidic air channels. The skin is only 1.5mm thick, according to the company, and each panel expands or contracts independently to push against the wearer's skin. Combined with this is a force-feedback exoskeleton capable of applying up to four pounds of resistance to each finger as well as a magnetic motion tracking system that the company says tracks each finger with sub-millimeter accuracy and six degrees of freedom.

HaptX says this entire solution allows the gloves to give users a sense of not only an object's presence but also its shape, texture, weight, and movement. If a surgeon doing virtual training is holding a scalpel for example, rather than vague vibration and feedback that lets her know she's holding some sort of object, the HaptX Gloves provide sensation that mimics that of holding a real world scalpel.

On FundamentalVR's end the company is providing what it calls its Surgical Haptic Intelligence EngineTM (SHIETM), a system that is calibrated to mimic the tactile sensation of real-life medical tools and organic tissues with sub-millimeter accuracy of resistance.

“The ability to touch and interact naturally with virtual environments is transforming the way industries train workers and bring products to market,” Jake Rubin, founder and CEO of HaptX said in a press statement. “The healthcare industry is at the forefront of this shift, and it’s set to be transformed by advancements in VR and haptics.”

Healthcare has emerged as one of the main uses cases for enterprise VR. A 2017 report by Research and Markets stated that the market for augmented reality (AR) and VR in healthcare reached $769.2 million in 2017 and is expected to grow to nearly $4.5 billion by 2023. In 2016, Goldman Sachs Global Investment research, predicted that healthcare would hold the second-highest share of the VR and AR market by 2025, second only to video games.

The Fundamental Surgery platform is currently deployed with a number of medical institutions around the world including the Mayo Clinic, UCLA, University College London Hospitals (UCLH), and the Sana hospitals group in Germany. The platform currently focuses on orthopedic surgeries but FundamentalVR hopes to expand into more surgical disciplines in the future.