HomeElectronicsNew Battery Management Technology Could Boost Range, Longevity of Big Packs
Recent
Electronics
Using Low-Code/No-Code Systems for Manufacturing Quality
May 19, 2022
Los Angeles Fire Department Deploys Nation’s First Electric Fire Truck
May 19, 2022
Supplier News Looks at an Automated Coolant Management System
May 19, 2022
Is Magneto the Hero We Need to Destroy Blood Clots?
May 19, 2022
POLL
Using AI To Help the Deaf Communicate
May 19, 2022
Argo AI Expands Driverless Operation to Austin and Miami in Search of More Challenges
May 18, 2022
12 Ideas that Could Change the World
May 18, 2022
Making the AC Power Main Intelligent
May 18, 2022 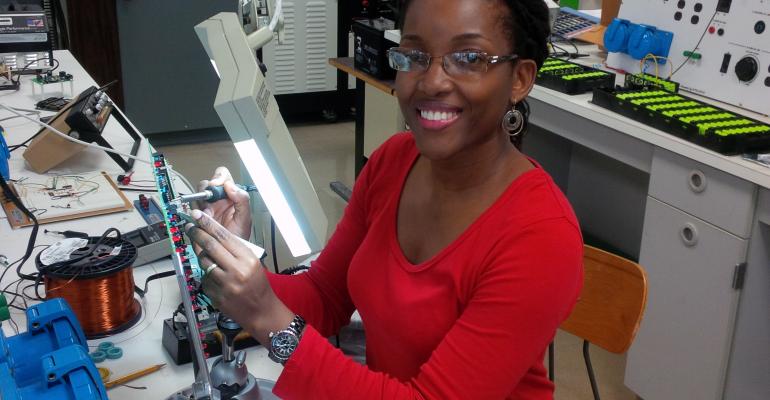 Makers of electric vehicles may soon have a better way of squeezing more range and greater longevity from their battery packs, thanks to the development of a new equalizer circuit for battery management systems.

The new technology, which will be discussed at the upcoming Advanced Design & Manufacturing show in Cleveland, could be an important step forward for automotive OEMs and battery makers searching for a better way to manage battery packs without breaking the bank. It could be applied, not only in electric cars and hybrids, but in grid storage and aerospace applications. “If you’re talking about hundreds or even thousands of cells – that’s where this could be of use,” Ngalula Sandrine Mubenga, assistant professor of electrical engineering at The University of Toledo and a developer of the technology, told Design News.

Known as a “bi-level equalizer,” the new technology is important because it enables battery pack developers to address the “either-or” problem that now faces them. Today, they can balance the voltages in a battery pack with a passive circuit that works by dissipating energy, or they can do it with an active circuit that costs approximately ten times more to employ.

In big packs, the cost differential is especially problematic, Mubenga said. An active equalizer can cost as much as $10 per cell, which translates to about $20,000 in a large grid storage pack with 2,000 cells. For that reason, cost-constrained developers often select the passive equalizer, even though they know that it loses more energy.

“Losses in passive equalizers are high,” Mubenga told us. “They have those high losses because that’s how they work.”

Mubenga proposes to change that scenario with the bi-level equalizer circuit. The bi-level equalizer, which is patented, combines the technologies of active and passive. It therefore is able to boost the charge in a weak cell, instead of dissipating energy to bring all the other cells down to its level. As a result, its energy dissipation is about one-quarter that of a passive equalizer, Mubenga said. At the same time, cost is low, she added.

“Bi-level gives you almost the performance of the active equalizer, but at a cost almost that of a passive equalizer,” Mubenga told us.

The overall effect is that the battery management system using a bi-level equalizer can boost the range of an EV, or improve the charge time of a grid storage system, at a much lower cost than would be possible with a conventional active equalizer. At the same time, the technology would improve the longevity of the pack’s cells.

The new technology addresses an issue that is well known to makers and users of large battery packs, Mubenga said. “All the manufacturers are aware of this problem, but they just can’t afford to use the active equalizers,” she told us. “But the bi-level equalizer changes that.”

Ngalula Sandrine Mubenga will discuss bi-level equalizers in a session titled Lowering the Cost of Energy Storage for E/HV and Grid Applications Using a Bilevel Equalizer for Large Li-Ion Batteries at ADM Cleveland on March 7, 2018.

At 95, John Goodenough Is Still Searching for the Next Big Battery Breakthrough

Senior technical editor Chuck Murray has been writing about technology for 34 years. He joined Design News in 1987, and has covered electronics, automation, fluid power, and auto.
TAGS: Battery/Energy Storage
0 comments
Hide comments
Related
You Might Like