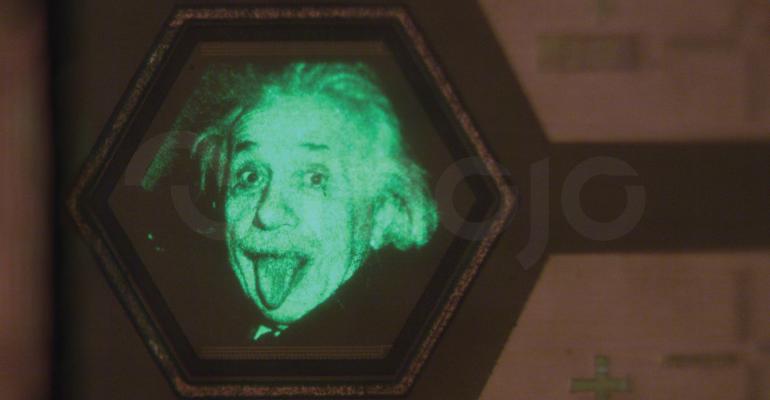 Augmented reality contact lenses sound like something straight out of science fiction. The engineers at Mojo Vision think its possible, and they're well on their way there.

Even if you're a fan of cyberpunk science fiction, the idea of contact lenses with augmented reality (AR) capability seems sufficiently out of reach for today's technology. Some might even call the task of creating such a thing impossible. And that's the way the team at Mojo Vision likes it.

Attendees at CES 2020 got their first glimpse of the technology Mojo Vision is developing – contract lenses that act as miniature displays – essentially giving wearers a heads-up display akin to something out of Black Mirror. The prototype on display wasn't wearable, but it did showcase that the company is able to project images onto a contact lens form factor.

Founded by a team of engineers and serial entrepreneurs, Mojo Vision is arguably one of the more bold companies to enter the AR and mixed reality (MR) space. Should they achieve their goal, the company's founders believe they can completely transform the technological landscape.

Speaking with Design News, Mike Wiemer, the CTO and co-founder of Mojo Vision, said the origins of the company came simply from the search for “a good problem to solve.” His search for new business opportunities led him to meet Drew Perkins, a serial entrepreneur with a background in photonics as well as optical and networking technologies, and Michael Deering, whose engineering background includes developing graphics hardware as well as VR/AR technologies. Perkins and Deering would go on to become Mojo Vision's CEO and CSO respectively.

“Michael had this wacky idea about doing contact lenses with displays in them and Drew and I thought, 'Well, that's sufficiently crazy that it's worth looking at.' And we realized that [Michael] had figured out a bunch of the core insights into how to approach this problem. We thought between the three of us we probably had the pieces of a founding team with a big idea and a good problem to solve.”

“I think the biggest challenge here is a systems engineering problem,” Wiemer told Design News, “If you look at any of the one component level problems to this and asked if we could solve it the answer would be, yes. The hardest part about this program is the aspect where you've got to integrate all of these different technologies into a system – and that system has to work and has to provide value to the customers and users.”

At its inception, Wiemer says Mojo Vision was focused on a single task – creating the world's smallest projection systems, ones so small they would fit onto a contract lens. For context, the average diameter of a contact lens is about 14-16 millimeters.

“We needed to design ultra-small displays and ultra-small, cleverly-designed micro-optics so that the display would focus onto your retina, even though the display sits on your cornea,” Wiemer explained. “Think about taking your phone and bringing it closer and closer to your eye until it's just right above your cornea. You can't focus on that. So you have to put in some optics to make a little projection system to take the light from the display and focus it on your retina.”

Fortunately for Wiemer and the Mojo Vision team, the larger semiconductor industry has already done a lot of the legwork. The 0.48-mm, 14,000-ppi display used in Mojo Vision's lenses for example, was enabled by MicroLED technology, allowing Mojo Vision's engineers to achieve a pixel density of over 200Mppi², making it the smallest and densest display ever designed for dynamic — or moving — content, according to the company. “When it comes to making the microLEDs, we use semiconductor lithography and semiconductor edge tools and so on,” Weimer said. “It's our process; it's our know-how that results in that really small device, but, for example, we don't have to invent the manufacturing equipment that makes it.”

He continued. “It's the same with things like the wireless data systems we're making. We can't buy Wi-Fi chips or Bluetooth and put them in the contact lens because they take up too much power and too much space. But world has kind of mastered what wireless link is and how wireless systems work and how to you design them. So we hired a team of people who really understand wireless radios and said, let's build a purpose-built radio that's ultra-low-power and fits in the contact lens and does what we want.”

Those wireless radios work using a proprietary protocol that Mojo Vision developed specifically for the data needs of its lenses. “ Bluetooth is a great protocol if you don't know what kind of data you're going to send, but we need something very general purpose,” Weimer said. “But when you know exactly what it is you're going to send – the kind of information packets, how often you're sending them, and what the latency requirements will be, you can actually create protocols that are more powerful and efficient to do that task.

“Each step of the way we have had to create the technologies, but we've got this great foundation to stand on, be it semiconductor manufacturing technologies, ASIC technologies, or wireless link technologies. We're not inventing from whole cloth, we're standing on the shoulders of giants if you will.”

That level of innovation also extends into the battery and power aspects of the lenses. “We have our battery technology that we integrate into the lens, but from there on it's all about the system design,” Wiemer said. “Because we're making all of our own chips that go into the lens we engineer those chips to be ultra low-powered chips. So it's a two-fold thing You've got to get the energy source in the lens and you got to use all that energy very judiciously. That usually means you need purpose-built chips that are specifically designed for what you need. We cannot waste any clock cycles or any transistor energy.”

The company declined to give specifics on the miniature battery that powers its lenses but did comment that the lenses can be wirelessly charged.

The last time contract lenses tried getting a high-tech upgrade was back in 2014, when Google announced it was developing what it called smart contact lenses. Google's lenses were targeted at healthcare applications – specifically glucose monitoring done by measuring the composition of the wearer's tears using embedded sensors.

Google's project has since been discontinued – in part because of doubts over how accurate of a measurement of someone's glucose levels can be garnered from tears.

Mojo Vision is looking to succeed where Google failed, albeit in a different arena. “I think the genesis of our program was to solve a very different problem than what [Google] tried to solve and it just took us down different paths,” Wiemer said.

What Mojo Vision does have in common with Google is having to deal with the FDA. As contact lenses are a regulated medical device, it means Mojo Vision's product must pass all of the related rigors. That means efforts like third-party toxicology testing of materials and ethical analysis of the health risks and consequences of any component failures.

“Frankly, What we're trying to do is combine the elements of the medical device industry and tech companies. You can think of a company like Google as a tech company, and a company like Medtronic as a medical device company – how they approach problems and how they think about problems are different. We're trying to be a company that marries some of that – the tech industry innovation and speed of work, with the rigor of a medical device company. The safety of this device, the material selection, the low-power nature by design, and many other aspects are all purposely engineered to be safe just from the get-go, so that's that's just a part of the whole philosophy [at Mojo Vision] of design engineering.”

Part of that design process involves a partnership with Vista Center for the Blind and Visually Impaired, a Palo Alto-based nonprofit that offers rehabilitation services to blind and visually impaired adults and children. Under the partnership, the Vista Center will be providing feedback to Mojo Vision's engineers as they continue to interact on their product.

The FDA has also admitted Mojo Vision into its Breakthrough Device Program, a voluntary initiative designed to accelerate the time to market for technologies that can have a significant, positive impact on patients. Previous devices to have received a breakthrough device designation from the FDA include the first-ever artificial meniscus, as well as various innovative cardiovascular technologies.

“[The FDA] wants to make sure that they give companies with breakthrough technologies access to their people so that we can have regular discussions about the problems that we're solving, how we're solving them, and ask for any input or guidance from the FDA along the way,” Wiemer said.

Mojo Vision hasn't committed to a public release date for a fully-wearable product, but Wiemer said the company is actively working on its next-generation prototype. Ultimately, the company is pushing toward a final product that can have an entire ecosystem built around it for a variety of applications ranging from enterprise to healthcare and even entertainment and productivity – all while still providing vision correction for those who need it.

“The category of augmented reality or mixed reality is one that hasn't been perfectly well defined, and there's probably a pretty wide range of things that would fit into that category, “Weimer said. “Two very famous ones, of course, are the HoloLens and Google Glass. But if you look at those two products, they're wildly different – they're very different takes on what it means to give people an eyes-up, hands-free experience.”

Weimer said that Mojo Vision's own unique take on AR and MR is to go after utility – providing wearers with the right information at the right time. It's all part of a larger philosophy that company CEO Drew Perkins calls, “Invisible Computing” – delivering information in a way that is instantaneous, unobtrusive, and hands-free.

“When it's time to turn left when you're driving you should see the directions, but when it's not time to turn left, we don't want anything to be there,” Weimer said. “We want to let you be present for whatever activity you're doing.” One particularly exciting application for Weimer is in real-time language translation. “Imagine speaking to somebody whose language you don't speak. We could add subtitles so you can understand what they're saying.”

Weimer admits his company is playing a complex game. But it's also one Mojo Vision believes it can win. “We can do a lot already with with the current display technology that we're making,” he said. ““We're trying to take put our own take on what AR is.”