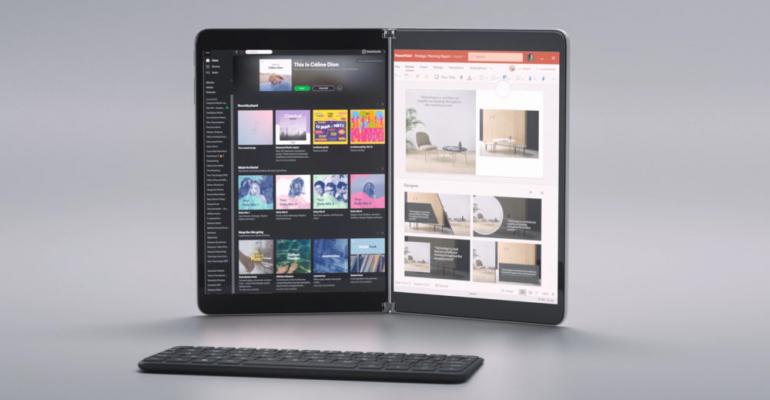 Enabled by Intel's new Lakefield processor, Microsoft is preparing a 2020 roll out of a foldable, dual-screen laptop and a smartphone.

Microsoft will be bringing two foldable dual-screen mobile devices to consumers in 2020 thanks to a new chip technology created by Intel.

Microsoft made a handful of product announcements at its Microsoft Event on October 2, including new additions to the the Surface Pro and Surface Laptop families, as well as a pair of Surface Earbuds. But the most buzz came from two new foldable, dual-screen products: the Microsoft Surface Neo, a dual-screen laptop; and the Surface Duo, a dual-screen smartphone-like device.

The Surface Neo will be the first to feature a next-generation chip from Intel called Lakefield. Microsoft said it chose the chip specifically because of its ability to facilitate the size and computing needs of its dual-screen devices.

First teased at CES 2019, Lakefield is a 10-nm “hybrid CPU” from Intel – meaning it integrates different CPU core architectures. Intel has said this hybrid approach offers a balance of compute performance and battery life that is ideal for mobile devices. Lakefield in particular has five cores packed onto a single motherboard – a 10-nm, high-performance Sunny Core along with four Intel Atom processor-based cores. All-in, the SoC package measures 12 x 12 mm.

Crucial to Lakefield's small size is a new packing technology Intel calls Foveros 3D that allows for the chip's components to be stacked on top of each other rather than laid alongside each other. Foveros is designed to allow two or more chiplets to be assembled together. The logic die sits at the base while other components such as the memory are stacked on top of it.

Intel is positioning Lakefield to not only compete with offerings from competitors like Qualcomm and AMD in terms of mobile computing performance, but to also facilitate new form factors and devices such as the Surface Neo.

The limited specs on the Neo released by Microsoft said the device will be ultra-thin, measuring 5.6 mm on each side (the thinnest LCD ever created, according to Microsoft), weigh 655 g, and will be surrounded by Gorilla Glass for durability.

The device features a 360-degree hinging system allowing it to open up in a variety of configurations beyond the standard open-closed scheme of a typical notebook. Microsoft said its hinging system uses a combination of microgears and an added torque system to provide stability and a durable feel when opening the Neo.

The Neo's two 9-in. touchscreen displays are connected through the hinge by an array of over 60 micro-coax cables, each thinner than a human hair.

With both screens open and the device's keyboard peripheral connected via Bluetooth the device looks like it will take up about as much space as an ultra-thin 13-in. laptop like the Microsoft Surface Laptop. The keyboard can also be connected magnetically in a way that uses one entire screen and partially cuts off the other, allowing the truncated screen to be used as a trackpad or smaller touchscreen. There's also a stylus pen available for using the device in a more tablet-like configuration.

On the software end the Neo will run on a new version of Windows 10 called Windows 10X that has been designed specifically to run on dual-screen devices. Microsoft's vision is to bring the productivity and efficiency advantages of a dual-screen desktop setup down to mobile. During the event Microsoft demonstrated how apps on the Neo can run across both screens or be isolated to a single screen depending on the user's preference.

The announcement of Windows 10X immediately brought questions to mind of just how many more dual-screen devices Microsoft is planning. And in a surprise announcement the company unveiled that there is at least one more on the horizon – the Surface Duo.

Though the Surface Duo has all the bells and whistles of a smartphone on paper, Microsoft wants you to think of it less as a smartphone and more like a mini tablet or computer that also happens to make calls and texts. Technical details on the device were scant, but Microsoft did say it features two 5.6-inch touchscreen displays and utilizes the same 360-degree hinging system as the Neo.

Microsoft also announced it is partnering with Google to bring Android to the Duo, meaning developers will be able to design and deploy Android-based apps for the device. Microsoft also committed to offering APIs in the future that will help developers code for applications that take unique advantage of the dual screens.

The Future Is Not Yet Foldable

It will be interesting to see how readily consumers will embrace Microsoft's foldable products. Foldable phones in particular have been on the horizon for a while now and the first generation hit shelves this year with releases from Samsung and Huawei, as well as an anticipated re-release of the once-popular Motorola Razr with foldable functionality later this year.

No foldable phone has really taken off with consumers however, in part because of pricing (Huawei's Mate X retails for about $2,600) and concerns over durability.

Samsung, one of the first to market with its Galaxy Fold earlier this year, had to delay the phone indefinitely due to flaws in its design. Early reviewers got their hands on the Galaxy Fold and found their phones breaking due to issues with its hinging system, screen, and unclear instructional materials. The Surface Neo has a bezel at the hinge, meaning the dual screens do not form one continous screen when unfolded. Design decisions like this suggest Microsoft has paid attention to Samsung's woes in engineering its own foldable products.

Microsoft said both the Surface Neo and Surface Duo will be released in holiday season of 2020. No information was given on the pricing of either device.