HomeElectronicsIs Magic Leap the Most Overhyped Company in Augmented Reality?
Recent
Electronics
Mercedes-Benz Sustaineer Concept Electric Van Scrubs the Air While it Drives
Oct 28, 2021
Spooky Halloween Tech Is Here. Just Look at These Doozies
Oct 27, 2021
Halloween? What a Perfect Time to Think About Generating Electricity From Blood!
Oct 27, 2021
Ghosts of Medtech: What Ever Happened to These 7 Medical Devices?
Oct 27, 2021
POLL
How to Survive a Zombie Apocalypse
Oct 27, 2021
America's Supply Chain Crisis by the Numbers
Oct 27, 2021
Want Scary Stuff for Halloween? Check out the Tech for 2021
Oct 27, 2021
How Apple Influenced Medical Packaging
Oct 27, 2021

Is Magic Leap the Most Overhyped Company in Augmented Reality? 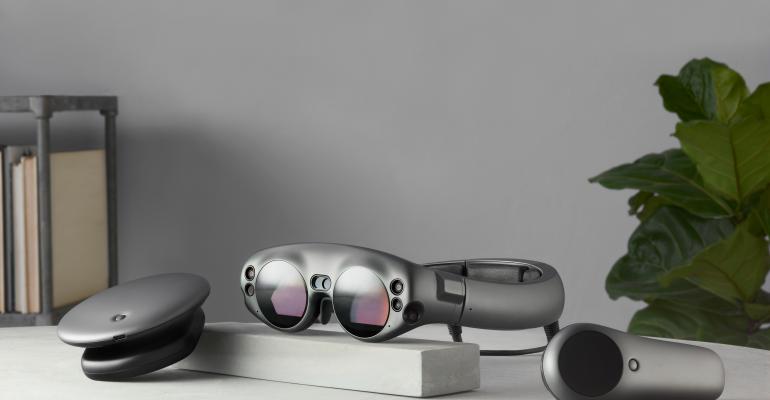 <p><strong>Magic Leap </strong><strong>(</strong><strong>2018</strong><strong>)</strong></p><p>In 2014 Magic Leap was a mysterious startup that raised nearly half a billion dollars in funding from</p><p>major players like Google and Qualcomm. Originally the company pitched itself as having developed a way of doing augmented reality without the need for cumbersome hardware. Rumor was that Magic Leap could use smartphones and other wearables to create and project virtual images onto environments that we could then interact with using specialized objects the company calls “totems.”</p><p>Alas, that idea never came to fruition and, after some <a href="https://www.designnews.com/electronics-test/magic-leap-most-overhyped-company-augmented-reality/28172318458883%20%5D" target="_blank">controversy</a> around the legitimacy of its demo videos up to that point, Magic Leap turned out to be doing AR more or less the same way everyone else has done it.</p><p>In 2018 the company released its Magic Leap One headset. Since that time the company has <a href="https://www.designnews.com/design-hardware-software/magic-leap-hoping-enterprise-will-be-its-salvation/189969968462033" target="_blank">pivoted</a> away from consumer and entertainment applications and has leaned into positioning itself as an enterprise AR company.</p><p><em>(Image source: Magic Leap)</em></p>
In a live stream, secretive augmented-reality hardware company Magic Leap pulled back the curtain a bit on its One AR headset. Has the company lived up to the hype yet?

In the augmented and mixed reality space, Magic Leap is the company everyone talks about, but no one knows anything about. The secretive startup racked up big funds from high-profile backers like Google and Alibaba with the promise that it was creating hardware that would deliver a level of immersion in augmented reality (AR) that had not been achieved.

In a June 6 livestream on Twitch, Magic Leap unveiled a few more details about its flagship system, the Magic Leap One—discussing many of the device's features, but keeping mum on the juicier technical details.

Shanna De Iuliis, lead technical marketing manager at Magic Leap, sat down with Alan Noon, senior learning resources technical artist at Magic Leap, to give an overview of the Magic Leap One. What they revealed is a system that looks on par to compete with similar offerings, such as Microsoft's Hololens. But there's no indication of the breakthrough innovation that made Magic Leap such a buzzed-about company.

New Innovation? Or More of the Same?

De Iuliis described the Magic Leap One as a “spatial computer,” capable of tracking its external environment—and layering virtual objects within it—with a sense of scale as well as persistence (if you leave a room and come back, a virtual object will be where you left it, just like a real one). The major function Magic Leap is pushing at this point is the Magic Leap One's use of “light field” technology, which allows it to mimic the way light reflects off of real objects. Done correctly, this could add even more detail and realism to the AR experience by having virtual objects respond to real-world light.

The Magic Leap One consists of three components: the Lightwear glasses; the LightPack, a body-worn unit that handles all of the processing; and a controller.

The Lightwear features an array of cameras and sensors for environment tracking and other purposes. The headset will give wearers six degree of freedom (6DoF) movement and allow for recording of audio and video. The headset also features a set of eye facing cameras to enable eye tracking for control functions as well as tracking focus. Implemented alongside foveated rendering, this could allow Magic Leap One to render virtual objects with realistic sharpness and blur, depending on where you're looking and where the object appears in your field of vision.

The headset also allows for spatial audio. Rather than a pair of earbuds or headphones (though it allows for the option for these), the Lightwear features an array of speakers around the inside of the headband to allow for 3D audio. This means audio will come from the direction of the sound source. If something is behind you, it will sound like it is behind you, for example.

The Lightpack is the most interesting and, because of that, probably the most secretive aspect of the Magic Leap One. The small unit clips to your pants (not your belt, De Iuliis warned) and handles all of the processing for the unit, connecting to the Lightwear via cables.

In a blow to the more visually impaired among us, De Iuliis said it is not recommended that users wear the Magic Leap One with prescription lenses on. However, she did say the company is working with partners to develop corrective lens attachments for the headset.

When asked by live stream viewers, De Iuliis and Noon refused to disclose any technical specs on the Lightpack beyond its ergonomics. De Iuliis did offer that the LightPack features a USB-C connector for connecting peripherals and uploading developer content. She also mentioned that the device is WiFi and Bluetooth enabled. Noon said users will have to wait for a later date to find out about the features that developers are really curious about, such as field of view, processor power, pixel count, weight, and of course, battery life. (De Iuliis said battery life would last several hours, depending on the application, but declined to give a hard number.)

If you think back to HP's backpack form factor workstation designed to deliver VR content, the fact that Magic Leap has been able to compress AR functionality into a unit small enough to fit on your pocket is an impressive feat. It's worth noting, though, that the Hololens is fully standalone with no external processing unit required. Magic Leap's engineers may have forgone this option in favor of creating a lighter, more comfortable headset.

The Magic Leap One controller isn't worth discussing much at this point. Based on the live stream, it appears to offer the same touchpad, point-and-click functionality as controllers for VR headsets like the Oculus Go and Lenovo Mirage Solo. However, similar to Microsoft's Hololens, Magic Leap One will allow for hand gesture control, which opens up a lot more functionality. While it only functions with an expanding library of preset gestures (i.e., flex your finger to “click” on an object), it doesn't seem to offer the same sort of robustness and variety seen with hand gesture controllers like the Leap Motion controller.

De Iuliis said Magic Leap will be constantly expanding its library of gestures for developers, so it is possible that Magic Leap One could achieve fidelity close to or matching that of working with real world objects someday. Factoring in the eye tracking capability and the headset's ability to understand “head pose” (using head position to trigger content in an environment), it's easy to imagine Magic Leap One content having a strong depth of interaction.

This will be particularly important if Magic Leap intends to go after the Hololens market and capture enterprise users, such as engineers and designers. Imagine enterprise users, who are designing a product, being able to manipulate it with their hands, but also to control other aspects of their environment based on where their head and eyes are turned. The Magic Leap One offers support for multi-user environments and interactions, but it will have to provide some considerable advantages and conveniences to a design workflow to win over most engineers.

The Weight of Past Hype

Given that it offers functionality that looks comparable to other offerings in the AR space, such as Hololens, Google Glass Enterprise, and Vuzix AR glasses, it can be hard to see why Magic Leap One garners reactions that range from tepid to hostile.

To understand why, you have to understand the history of Magic Leap and the hyperbole that surrounds the company. Magic Leap began quietly enough when it was founded in 2010. But in 2015, it started attracting big buzz in the tech industry with a series of demo videos (below) outlining the capabilities of its hardware. The company promised that it would achieve what sounded like nothing short of science fiction, seamlessly blending realistic virtual objects with the real world. A lengthy 2016 profile in Wired talked up Magic Leap as a company with the potential to become a major player in tech on the same level as companies like Apple, Microsoft, and Samsung.

But it didn't take long before the cracks began to show. In 2016, The Information conducted an investigation into Magic Leap and found that its high-profile demo video was created by a special FX studio—not filmed through the company's own technology. Reports from Magic Leap employees revealed concerns that the company had oversold what it could deliver and how quickly. There were also reports that the company was working off a less-than-innovative sounding prototype—a device so big employees took to calling it “The Beast.”

As The Information reported:

“The first prototype was the size of a refrigerator, for instance, and was called the “Beast” by company employees, The Information has learned. It used a projector with a motorized lens that enabled images to have more depth and therefore look more realistic. The spectacles that Magic Leap plans to release will use a different kind of lens that aren’t likely to offer the same level of depth, for instance.”

Magic Leap was promising investors that it could take everything The Beast did and cram it into a form factor the size of a pair of glasses. Skepticism around Magic Leap's capability grew to the point that many were calling it vaporware and questioning whether it would release a product at all.

In December 2017, Magic Leap announced that a Creator Edition of its headset will be available sometime in 2018 (no release date has been given as of this writing). It also opened up a creator portal for developers looking to make content for the Magic Leap One. Creators have been rolling out demos for Magic Leap, but they don't appear any more impressive than content offered on Hololens or through the products from Vuzix.

Most importantly, the public has yet to actually see any content actually running on Magic Leap hardware! Live stream viewers were hoping for a live demo and pressed for one. But De Iuliis and Noon, again, said that would have to come at a later date.

After years of speculation and hype, to have the Magic Leap One turn out to be just another addition to the increasingly crowded AR headset market—rather than a game changing innovation—is disappointing at the very least. The market is young, however. With the company still holding back on demos and full technical specs, there is still a chance to wow users. Optimists will hope that the killer app for Magic Leap is just around the corner and that all of the skeptics will owe the company a big apology by year's end. But with things as they stand now, the rest of us can easily be forgiven for being a bit more realistic.

You can watch the full Magic Leap live stream here.