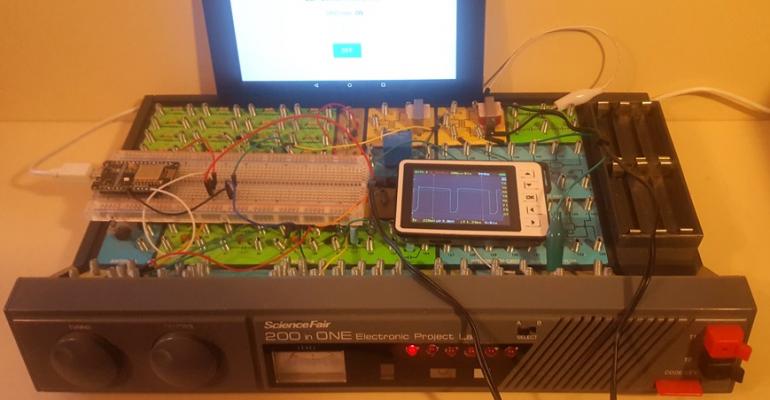 The design concept behind the ESP8266 WiFi microcontroller is low-cost wireless networks. These networks can help obtain vital data from industrial machines and allowing wireless control of mechatronics-based systems in manufacturing facilities.

According to Statista, the Internet of Things (IoT) market is to reach $212 billion by the end of 2019 with an industry market value of $1.6 trillion by 2025. This technology will continue to impact the consumer, industrial, medical, agricultural, and pharmaceutical markets as big data demands drive the IoT industry. With such a demand, a variety of innovative and wireless technologies are being developed daily. One silicon device that has made inroads into this growing technology field is the ESP8266 WiFi microcontroller.  The small microcontroller’s system architecture provides a wealth of circuit peripherals and technologies that appeals to designers, developers, engineers, and makers of WiFi enabled products.

The ESP8266 microcontroller developed by Espressif Systems is a 32-pin quad flat no-lead (QFN) WiFi system on a chip (SOC) package.  The ESP8266 integrates a radio circuit consisting of antenna switches, a power amplifier, a low noise receiver amplifier, filters, a power management module, and a RF balun. The RF balun is an electrical component capable of taking a balance signal and converting it to an unbalanced signal.

A balance signal has equal line impedances. An unbalanced signal has unequal impedances. The RF balun ensures the antenna works properly with the RF transmit and receive circuits through the internal network switch and proper impedance matching. The balanced and unbalanced impedances are achieved with the RF balun. At the heart of the ESP8266 is a 32-bit microprocessor manufactured by Tensilica. The Tensilica microprocessor manages the binary data and coding language information required to work with the ESP8266’s physical layer electrical interfaces. Such physical layer electrical interfaces include the general-purpose input/output (GPIO), the universal asynchronous receiver transmitter (UART), pulse width modulation (PWM), serial peripheral interface (SPI), and the analog to digital converter (ADC). With these physical layer electrical interfaces, the ESP8266 can be wired to external sensors, transistor driven actuators, discrete LEDs, and displays (LCD, OLED, and LED). In addition, the ESP8266 microcontroller supports the WiFi specification of 802.11 b/g/n and the 2.4 GHz operating frequency. Besides supporting a variety of electrical interfaces, the small QFN WiFi SoC microcontroller can be operated from a voltage supply range of 2.5V- 3.6V.  The average operating current of the SoC microcontroller is 80 milliamperes (mA).

The design concept idea behind the ESP8266 WiFi microcontroller is to develop low cost wireless networks. These networks can assist in obtaining vital data from industrial machines on the plant floor and allowing wireless control of Mechatronics based systems found in manufacturing and process facilities. Also, home automation systems can easily be deployed using the wireless SoC architecture of the ESP8266. Such a wireless infrastructure can allow the creation of low-cost networks to send data to a variety of mobile and laptop devices assisted by the cloud. To allow access to these wireless nodes through the cloud requires a hosting webpage. A unique feature of the ESP8266 is the internal hosting webpage that can be configured using a programming language like MicroPython. Also, the ESP8266 SoC architecture provides a unique internet protocol (IP) address that works in unison with the Media Access Control (MAC) and network interface controller (NIC) subcircuit integrated within the microcontroller.

Ease of Prototyping A Wireless PoC

An example PoC concept using the development board is the creation of a WiFi enabled Audio Signal Generator. With software created in MicroPython, a webpage hosting site for a simple user interface (UI) will allow the wireless operation of an audio signal generator. Such a device will aid in injecting signals into malfunctioning amplifier units remotely using a laptop computer, smartphone, or tablet accessing the ESP8266’s web hosting page through an IP address.

The ESP8266 WiFi microcontroller’s digital pin enables the audio signal generator upon receiving a wireless command from the simple UI. An LED provides a visual indicator of the device being enabled by the UI. Also, the measured range of audible tones measured with an oscilloscope is 657Hz – 1.70KHz.

The development of this WiFi test gear was prototyped using a retro Radio Shack Science Fair 200-in-1 electronics project lab and an ESP8266 development board. This product concept scenario provides benefits for electronics troubleshooting in the field by a technician or service engineer. As illustrated in this example, a variety of IoT products can be rapidly developed using the ESP8266 WiFi microcontroller. Additional technical specifications of the ESP8266 WiFi microcontroller can be found at Espressif’s website.