A Look at the US/China Battle for AI Leadership 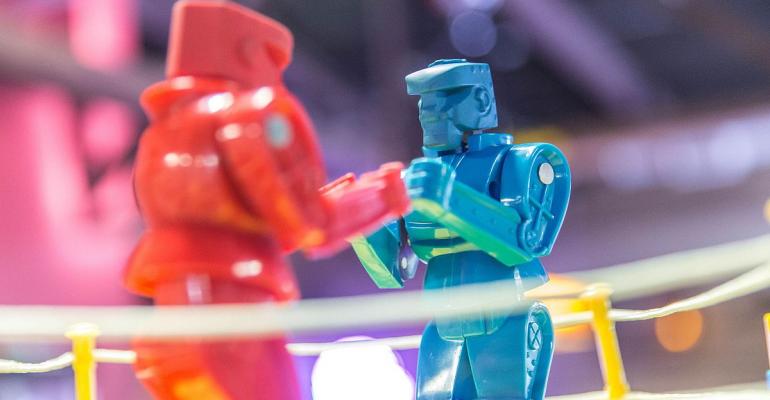 The US and China are waging a behind-the-scenes war over who will emerge as the global powerhouse of artificial intelligence. Where do each country's strengths and weaknesses lie?

The battle over AI technologies has already fueled a full-scale trade dispute between the US and China. And the economic powerhouses are quickly entering into a full-blown war in the artificial intelligence (AI) arena.

As a pioneer of AI, the US has always remained one step ahead of China and the rest of the world where the technology is concerned. But will it relinquish this lead in the foreseeable future? Current trends show that's certainly a possibility. China is pushing harder to get its nose to the front of the industry, outspending the US government by multiple folds on AI research and infrastructures. The Chinese government believes its aggressive AI strategies will propel the country into the leadership position in the field by 2030.

However, with every passing day, the tussle between both countries grows more complicated, even as many US tech companies turn to China to implement their AI research and development projects. The struggle continues to evolve, with current concerns revolving around national security, economic warfare, and many other sensitive issues. Accusations of theft and espionage have been a common theme, as the US government is currently putting its foot down with sanctions on Chinese imports.

The AI race is becoming even more frenzied with the emergence of 5G. The US leads the rest of world in this race, primarily due to the government’s commitment to the research and development of AI military applications.

However, the current Administration seems to be resting on its oars and paying much less attention to AI developments, presenting an opportunity for China and other countries to catch up and even take the lead.

Recognizing the growing threat that China poses to the United States’ AI dominance, President Donald Trump, to his credit, signed an executive order on the 11th of February aimed at revitalizing the country’s AI-related R&D initiatives.

The order contained directives for federal agencies to increase spending in “AI-relevant skills,” increase availability of federal data and computing resources to AI researchers, and more. But a conspicuous omission has been the lack of funding or well-instituted formal structures to support AI initiatives, which are critical to the country’s ability to fend off competition from China.

On the other hand, China continues to double down heavily on its AI capabilities, making the technology a key part of its long-term economic and military policies.

Here’s how both countries are currently fairing in the four key aspects of AI research and development:

The Chinese government has been quite aggressive in AI spending. According to Airforce Lieutenant General Veralinn Jamieson, the US Deputy Chief of Staff for Intelligence, Surveillance, and Reconnaissance, China spent nearly $12 billion on AI systems in 2017 alone. And that amount is estimated to skyrocket to $70 billion by 2020.

But while China is rolling out multi-billion dollar AI-related projects, the US government is struggling to sketch out any official AI R&D plans. Currently, US spending on AI has mostly targeted military applications -- the highest-profile AI expenditure being a $2 billion fund for the Department of Defense's AI Next project.

China is also looking to surpass the US in the number of AI engineers within its borders, pursuing a national educational policy designed to produce more STEM graduates than any other country. According to the World Economic Forum, China produced at least 4.7 million STEM graduates in 2016; compared to the 568,000 STEM graduates in the US.

China also holds 10 of the top 20 organizations in AI scientific publications, compared with six in the US, according to the WIPO.

Data from CB Insights shows that US currently holds the lead in the number AI firms globally. However, growing efforts from the Chinese government to see the country become the global leader may reverse this trend in the future.

While the US government takes a hands-off approach towards the private sector, China’s AI firms are working more closely with their government. The Chinese government has tapped large Chinese firms that develop AI technology, including Alibaba, Badu, Tencent, and BAT, to create AI hardware and software that other companies can leverage in the future, particularly around autonomous driving, facial recognition, and natural language processing.

Data is the most valuable currency in the AI world, and China realizes that. As a result, the Chinese government has been making efforts to legally require that data having anything to do with Chinese citizens must be stored within China, where it can be accessed by the government at any time.

Is The Scale Tipping?

Experts believe that the US still has an edge over China in AI. However, they warn that if the US Congress and Trump Administration continue in their lax approach towards AI, the scale may soon tip in favor of China.

This isn’t a far-fetched view in the least. In fact, it is a likely outcome if the current trends persist. With the aforementioned steps taken by China in the AI sector, there is a clear zeal evident there.

To maintain a leadership role in the sector, the US must take the same zealous approach China is currently taking. Accusations of espionage can only go so far, and aren’t likely to slow down any country’s AI aspirations. Concrete steps, on the other hand, are the only option.

Ralf is a tech blogger, he writes about the latest mobile phones and technology news. He currently works at Whatphone.com.au as a content manager and his writings can be seen on several other publications aimed at IT industry. He also into photography and loves taking pictures when free.