Electric powertrains are all the rage these days, but the evolution of the internal combustion engine hasn’t slowed. In fact, new changes are coming faster than ever.

Here, we’ve collected photos of engines offering some of the latest innovations in powertrain technology. From intelligent truck engines to tiny turbocharged models, we offer a potpourri of some of the highlights from the past few years. Flip through the following slides to see the best.

Imagine this: a full-size pickup operating on just two cylinders. That’s what a Chevrolet Silverado can do, thanks to the addition of an electro-mechanical variable camshaft and a feature called Active Fuel Management in its new 2.7-liter Turbo engine. In all, the engine offers 17 different cylinder deactivation patterns, enabling it to meet just about any driving situation. “It’s like having different engines for low- and high-rpm performance,” noted the engine’s chief engineer, Tom Sutter, in a press release. “The camshaft profile and valve timing is completely different at low and high speeds.” The engine, which offers peaks of 310 HP and 348 lb-ft of torque, replaces a 4.3-liter V-6 on the Silverado. (Image source: General Motors)

Supercar maker Koenigsegg Automotive AB has high hopes for its cam-free engine technology, which it introduced on a concept car in 2016. Known as FreeValve, the technology uses “pneumatic-hydraulic-electronic” actuators to control the combustion in each cylinder. By employing the actuators, instead of cam shafts, to open and close the valves, Koenigsegg says it can more precisely manage the combustion in each cylinder. FreeValve also enables the luxury automaker to eliminate other expensive car parts, including the throttle body, cam drive, timing gear, wastegate, pre-catalytic converter, and direct injection system. The company is rumored to be prepping the technology for inclusion on a $1.1 million supercar to be rolled out in 2020. In an interview with Top Gear, founder Christian von Koenigsegg declared FreeValve would enable him to build a near-zero-emissions car with an internal combustion engine. “The idea is to prove to the world that even a combustion engine can be completely CO2 neutral,” he said. (Image source: Koenigsegg Automotive AB)

Fiat Chrysler Automobiles’ 3.6-liter Pentastar engine is an example of careful attention to detail and a policy of continuous improvement. The engine uses two key features to boost fuel economy and torque. The first of those features is variable valve lift (VVL). VVL enables the engine to remain in low-lift mode until the driver calls for more power. It then responds by switching to high-lift mode for improved combustion. The second innovation is cooled exhaust-gas recirculation, which is said to reduce emissions, cut pumping losses, and enable knock-free operation at high engine loads. Those features provide the Pentastar with a 6% increase in fuel economy, while simultaneously boosting torque by 14.9%. Fiat Chrysler also points out that those improvements occur at engine speeds below 3,000 rpm, where elevated torque is most needed. (Image source: Fiat Chrysler Automobiles N.V.)

These days, engine performance is about more than torque and horsepower. It’s about efficiency, too. Toyota proved that in 2018 with the introduction of the 2.5-liter, four-cylinder Dynamic Force engine, which reportedly offers a thermal efficiency of about 40%. That’s a big step forward, considering that most of today’s engines are closer to 30%, which in turn means that 70% of combustion gets lost as heat. Toyota accomplished that with an array of modern improvements, including a long stroke, high-compression ratio, multi-hole fuel injectors, intelligent variable valve timing, and direct injection. The result: Used on the 2018 Camry, fuel economy is 29-mpg city and 41-mpg highway, a 26% improvement over the previous model. (Image source: Toyota Motor Corp.)

Ford’s 1.5-liter EcoBoost engine is noteworthy because it’s another example of a smart little engine capable of driving a relatively large vehicle with as few as two cylinders. The inline three-cylinder EcoBoost accomplishes that with cylinder deactivation, which senses when one cylinder isn’t needed and therefore automatically shuts it down. The system can deactivate or activate a cylinder in as little as 14 milliseconds to maintain a smooth ride. Even on three cylinders, however, it manages to produce 180 HP and 177 lb-ft of torque (when burning 93 octane fuel). It serves on the Ford Fusion in Europe and on the American Ford Escape SUV, where it can tow as much as 2,000 lbs. (Image source: Ford Motor Co.)

Cadillac took the turbocharger craze one better in 2018, introducing the Twin Turbo V-8 engine. The Twin Turbo employs a “hot V configuration” – that is, it mounts the turbochargers at the top of the engine, in the valley between the heads. By doing so, Cadillac engineers say they’ve reduced the engine’s overall packaging size and virtually eliminated turbo lag. Used on the Cadillac CT6 V-Sport, the new engine offers an estimated 550 HP and an amazing 627 lb-ft of torque. (Image source: Cadillac)

For those with a yen for a little old-fashioned horsepower and torque, Dodge has an answer in its 6.2-liter HEMI high-output V-8 engine. The engine, which produces 797 HP and 707 lb-ft of torque, draws much of its performance from a 2.7-liter supercharger – the largest factory supercharger of any production car. Along with the supercharger, the engine employs high-strength connecting rods and pistons, a high-speed valve train, and two dual-stage fuel pumps. Used on the Dodge Challenger Hellcat Redeye, the 6.2-liter engine can suck prodigious amounts of gasoline in high-output mode, draining the tank in a little less than 11 minutes. The good news, however, is that the Hellcat is still rated at 22 mpg under normal highway conditions. Dodge brags that the Hellcat is the industry’s quickest production muscle car, with a 0-60 mph time of 3.4 seconds. (Image source: Fiat Chrysler Automobiles N.V.)

In another of the major engine innovations of 2018, Mazda rolled out the SkyActiv-X engine, said to be the world’s first commercial gasoline-burner to employ compression ignition. By merging two classic technologies, Mazda engineers say they’ve combined the high-revving character of a gasoline engine with the efficiency, torque and response of a diesel. The key to their accomplishment is a technology known as Spark Controlled Compression Ignition, which maximizes the zone in which compression ignition is possible, and produces a seamless transition between compression ignition and spark ignition. When introducing the engine last fall, Mazda reported amazing numbers: torque up 10-30% and efficiency up 20-30% over its predecessor. Mazda says the engine also offers more latitude in the selection of gear ratios, adding even more to the engine’s fuel economy and driving performance. (Image source: Mazda Motor Corp.) 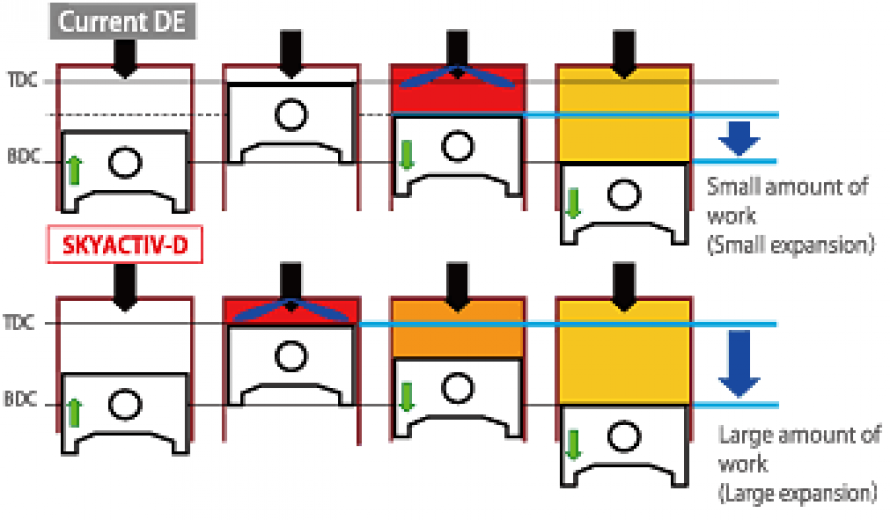