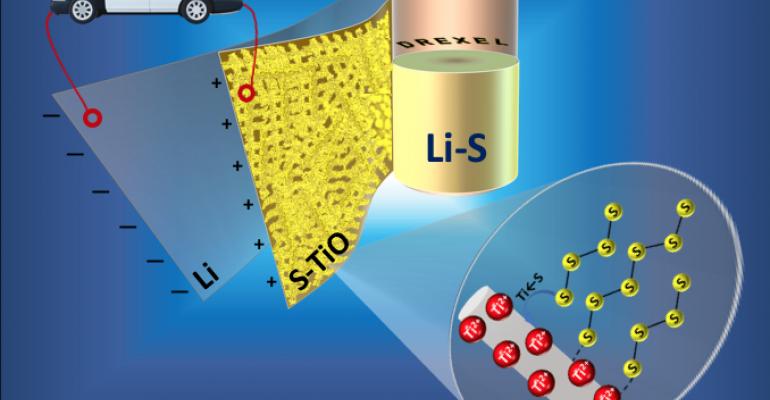 A new way to overcome the limitations of lithium sulfur batteries may finally allow this chemistry to go mainstream.

Among the most promising replacements for the current commercial lithium ion chemistry is lithium sulfur (Li-S). Already in limited production, the performance potential for the use of a sulfur cathode was proven in 2008, when the battery chemistry was used in a solar-powered unmanned aircraft that set altitude and endurance records. Lithium sulfur cells offer higher energy density and lower cost than current metal oxide cathode chemistries. The problem is that Li-S batteries have trouble maintaining their superiority beyond just a few recharge cycles. But a solution to that problem may have been found with new research at Drexel’s College of Engineering.

Recall that commercial lithium ion batteries have three main components. The positive electrode (cathode) is a combination of metal oxides. The negative electrode (anode) is usually made from carbon graphite, which allows storage of lithium ions between the graphite layers during charging. An organic solvent liquid electrolyte allows the flow of lithium ions back and forth between the cathode and anode during charging and discharging. The metal oxides of the cathode—typically nickel, manganese, and cobalt—are both heavy and relatively expensive. Sulfur, on the other hand, is both light and cheap.

The lighter weight makes sulfur attractive for electric aircraft batteries—particularly those designed for use in unmanned aerial vehicles (UAVs) or drones. The best Li-S batteries offer specific energy levels of 500 Wh/kg (watt-hours per kilogram), while most commercial lithium ion batteries are in the 150 to 250 Wh/kg range. Several commercial Li-S batteries are available in limited production, primarily for aviation and aerospace applications.

Li-S battery limitations result from the migration of sulfur away from the electrode in the form of intermediate products called polysulfides. Significant research around the world has been undertaken to control the formation and distribution of these polysulfides, which are the primary reason that Li-S cells fade after several recharge cycles. Until now, coatings and passivation layers that reduce polysulfide formation have shown the most promise.

Drexel’s solution, described in a university news release, is to create a structure within the sulfur cathode that traps the polysulfides and holds them in place. “We have created freestanding porous titanium monoxide nanofiber mat as a cathode host material in lithium-sulfur batteries,” said Vibha Kalra, PhD, an associate professor in the College of Engineering. “This is a significant development because we have found that our titanium monoxide-sulfur cathode is both highly conductive and able to bind polysulfides via strong chemical interactions, which means it can augment the battery’s specific capacity while preserving its impressive performance through hundreds of cycles,” he added in the Drexel release.

Not only does the porous nanofiber mat hold onto the polysulfides; it also helps reduce the weight of the battery. “We can also demonstrate the complete elimination of binders and current collector on the cathode side that account for 30-50 percent of the electrode weight—and our method takes just seconds to create the sulfur cathode, when the current standard can take nearly half a day,” said Kalra.

According to the release, “The nanofiber mat, which at the microscopic level resembles a bird’s nest, is an excellent platform for the sulfur cathode because it attracts and traps the polysulfides that arise when the battery is being used. Keeping the polysulfides in the cathode structure prevents ‘shuttling,’ a performance-sapping phenomenon that occurs when they dissolve in the electrolyte solution that separates cathode from anode in a battery. This cathode design can not only help an Li-S battery maintain its energy density, but also do it without additional materials that increase weight and cost of production.”

The mechanism by which the polysulfides are trapped was also studied. “This research shows that the presence of a strong Lewis acid-base interaction between the titanium monoxide and sulfur in the cathode prevents polysulfides from making their way into the electrolyte, which is the primary cause of the battery’s diminished performance,” said Arvinder Singh, PhD, a postdoctoral researcher in Kalra’s lab.

“Our Li-S electrodes provide the right architecture and chemistry to minimize capacity fade during battery cycling, a key impediment in commercialization of Li-S batteries,” Kalra said. “Our research shows that these electrodes exhibit a sustained effective capacity that is four-times higher than the current Li-ion batteries. And our novel, low-cost method for sulfurizing the cathode in just seconds removes a significant impediment for manufacturing,” he added.

If Li-S batteries can be further developed along these lines, they may be able to break out of their current role in specialized aerospace and aviation applications. They might become a mainstream way to surpass the performance of current commercial lithium ion batteries to improve the range, performance, and cost of future electric vehicles.