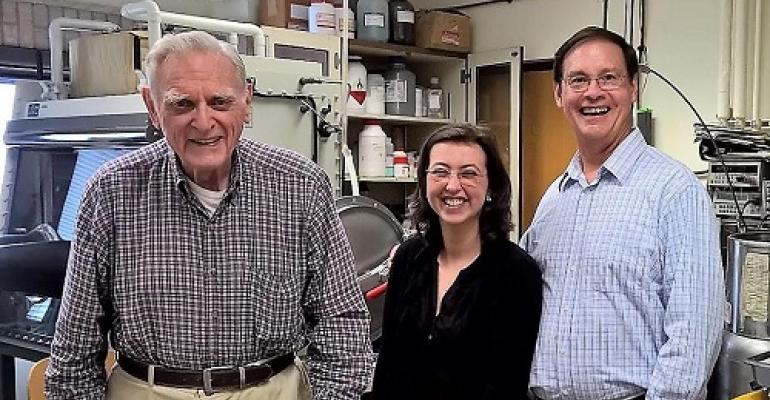 The engineer who co-invented the lithium-ion battery has led a team of researchers that’s developed a solid-state battery cell that could be the answer to providing safe, fast-charging, and long-lasting rechargeable energy storage for a range of devices, including electric vehicles.

The engineer who co-invented the lithium-ion battery is set to revolutionize the field again. 94-year-old John Goodenough—professor in the Cockrell School of Engineering at The University of Texas at Austin--has led a team of researchers that’s developed a solid-state battery cell that could be the answer to providing safe, fast-charging, and long-lasting rechargeable energy storage for a range of devices, including electric vehicles (EVs).

Goodenough, along with Cockrell School senior research fellow Maria Helena Braga and researcher Andrew Murchison, have developed a noncombustible battery that has a long cycle life, high volumetric energy density, and fast rates of charge and discharge. The engineers describe their new technology in a recent paper published in the journal Energy & Environmental Science.

The battery also allows for a greater number of charging and discharging cycles, which equates to longer-lasting batteries, as well as a faster rate of recharge that’s clocked in minutes rather than hours.
“Helena Braga is the really force behind all of this this,” he said, while Goodenough served as editor and writer of data, and Murchison himself the experimentalist.

Researchers used an alkali-metal anode—comprised of lithium, sodium or potassium--which increases the energy density of a cathode and delivers a long cycle life. In experiments, the researchers’ cells demonstrated more than 1,200 cycles with low cell resistance, they said.

The team chose a solid-state battery cell rather than a liquid one firstly because they are safer and don’t have the explosive potential that lithium-ion batteries have, Murchison said. Additionally, “lithium- and sodium-metal-based solid-state battery cells inherently have greater concentrations of active materials and therefore higher volumetric energy densities,” he said.

Today’s lithium-ion batteries use liquid electrolytes to transport the lithium ions between the anode and the cathode. If a battery cell is charged too quickly, it can cause what are called dendrites--or whiskers of metal--to form and cross through the liquid electrolytes, causing a short circuit that can lead to explosions and fires.

The battery design also differs from conventional batteries in other ways, he said. “Reversely to lithium-ion batteries, the capacity of these cells will not depend on the cathode’s capacity but on the anodes--which is much greater,” Murchison said. “The solid-state glass electrolyte enables us to made a safer battery cell. Due to homogenous plating, no dendrites will be formed.”

The battery also can be used in higher temperatures—up to 200 degrees Celsius—which makes it well suited to providing the power source for EVs, he said.

“Today’s lithium batteries do not like heat,” he said. For example, early versions of the Nissan Leaf would not start in the mid-day heat of Phoenix in the summer because the battery was too hot after the car was turned off for several hours, Murchison said. A solution to that is that “air conditioning can be added to the battery pack, but this is expensive and heavy,” he added.

The new battery also is a “perfect fit” for compact, low-cost energy storage for devices like sensors, micro security cameras, displays, and other portable devices, as well as wearables, Murchison said.

The team will continue their work to acquire several patents for the technology as well as work with key industry partners to accelerate the deployment of the technology, Murchison said. “We are also exploring the further optimization of our anode, cathode and electrolyte materials,” he said.