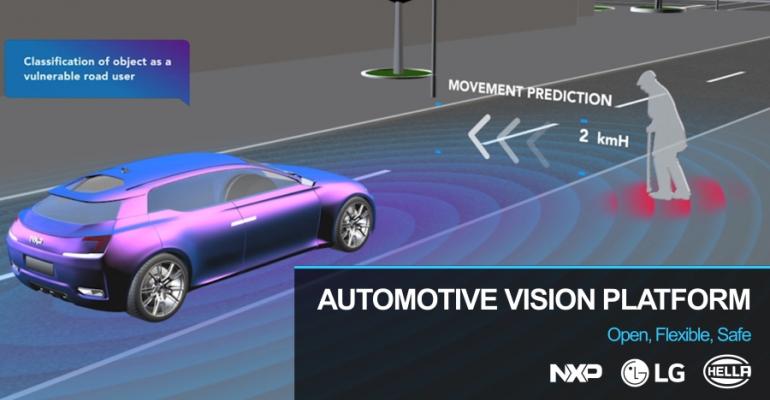 New automotive vision platform is said to be the first to allow OEM customization.

Three major automotive suppliers announced this week that they are teaming up to create an autonomous car vision platform that can be customized to serve the needs of any vehicle.

LG Electronics, Hella Aglaia, and NXP Semiconductors N.V. unveiled their new platform at the Consumer Electronics Show in Las Vegas on Tuesday. The companies said that the platform is the first to enable customization by the OEM. “It’s complete and it’s open,” Kamal Khouri, vice president and general manager of ADAS microprocessor products at NXP, told Design News. “If you want the complete, wrapped solution out of the box, we’ve got that. If you want to take our components out and replace them with yours, we’ve got that, too.”

The camera-based vision system is targeted at advanced driver-assistance systems (ADAS), such as adaptive cruise control, lanekeeping assist, traffic sign detection, pedestrian detection, and steering correction, among other capabilities. Its developers hope it will “pave the way for level 3 to 5 automated driving.” The platform has already been adopted by one unnamed European automaker.

In the partnership, LG Electronics supplies the camera platform, while Hella provides the application software (for functions such as lane departure correction and emergency braking), while NXP makes the silicon, drivers, and middleware. As such, LG does the integration and serves as the Tier One, while Hella and NXP supply the Tier Two software and hardware expertise.

The companies said that the new product provides an alternative to the closed, or proprietary, vision systems that now exist in the ADAS market. Automakers, they say, increasingly want to provide their own expertise, write their own software algorithms, and customize their vision systems to match the needs of their vehicles.

“Each OEM has gathered its own experience in ADAS,” Khouri told us. “And they want to bring that knowledge into the system, in the way they implement functions, mount cameras, minimize errors, and maximize safety. We want to enable them to do that.”

Khouri added that OEMs could use the new product “straight out of the box,” or they can work directly with the suppliers to customize it, or to overlay their own application software atop the existing operating system.

“Until now, there hasn’t been a solution out there with a fully integrated camera – hardware, software, and everything in one box – that you can actually customize,” he said.

NXP’s S32V processor, which serves as the compute engine for the vision platform, enables customization because it is built on open software.

“The message here is that we are taking a partnership approach,” Khouri said. “We want to work with the OEMs to build cars that are safe and accessible to everyone.”