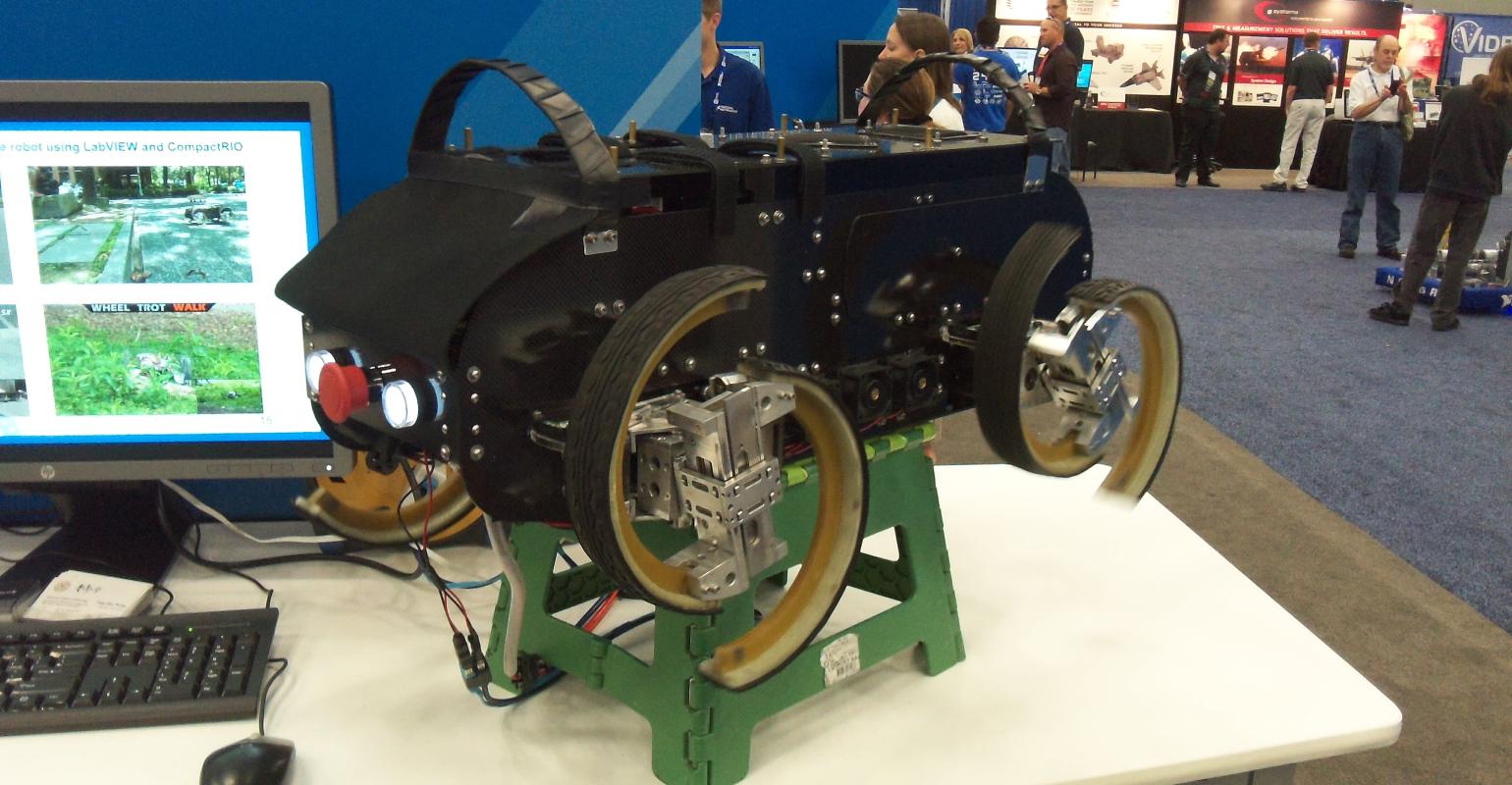 Legs or Wheels, Robot Uses Both

TurboQuad can quickly switch back and forth between the two modes of locomotion, enabling it to traverse rough or flat terrain.

Robots typically transport themselves on legs or wheels, but not both.

At teh recent NIWeek 2017 show, however, mechanical engineers from National Taiwan University showed off a robot vehicle that can quickly switch back and forth between the two modes of locomotion, enabling it to traverse rough or flat terrain. By doing so, the TurboQuad, as it’s known, could serve as an exploration robot in mountainous areas, on flat lands, or in applications where the terrain is unknown.

The robot’s inventor team, which included Ting-Hao Wang and Sammy Lin from National Taiwan University, believe that offering the choice of legs or wheels boils down to a matter of efficiency. “On uneven terrain, legs will always move more efficiently than wheels,” Wang told Design News. “But when you use leg motors to move on flat ground, it’s very inefficient. On flat ground, it’s always better to use wheels.” Wang added that energy efficiency is key for all robots, but particularly those used in remote locations.

The TurboQuad accomplishes the leg-to-wheel transformation simply and quickly. Using 60 W brush-type DC electric motors at each wheel, it operates a rack mechanism that enables the two semicircular halves of the wheel to separate themselves. As a result, each wheel transforms itself into two C-shaped feet. Encoders at the wheels count the rotations of the motors, enabling the robot to “know” when the transformation from wheels to legs, or vice versa, is complete.

“The sensors help us to do the position control,” Wang told us. “We know exactly the position of the motor, so we can calculate the geometry of the leg.” The robot also employs inertial measurement sensors to enable it to detect pitch and roll, making it more stable, Wang said.

In all, TurboQuad has eight motors, each with its own tiny planetary gearbox. Four of the motors do the transformation, while the other four drive the wheels. Control is provided by a CompactRIO cRIO-9024 real-time controller and a cRIO-9118 chassis. Four I/O modules handle input signals from the encoders, inertial measurement sensors, temperature sensors and Hall Effect sensors. A fifth module handles output signals to the DC motors.

Software for the robot, created within the LabView graphical programming environment, include a main control program running on the system’s microprocessor, an interfacing program on an FPGA, and a GUI on a remote laptop.

Wang and Lin said the control system and software enabled the team to build a robot that could quickly transform itself without having to stop first. Previous attempts at transformable robots required that they come to a halt so they could make the changeover, but that limited their ability to perform at high speeds, Wang said. In contrast, the TurboQuad can rapidly change its mode of locomotion within a single stride.

The use of CompactRIO and LabView also enabled the team of mechanical engineers to complete the project without seeking the expertise of electrical engineers or programmers. “It provided a platform, user interface and tools so we could fulfill our ideas,” Wang said.

Currently, the robot’s transformations must be made via remote control, but plans are for TurboQuad to make the changeovers autonomously, merely by watching the terrain ahead. “Our future work includes adding a camera, so it can understand the environment on its own,” Wang said. “That way, it could make all the decisions by itself.”