Internet of Space or Space Junk? 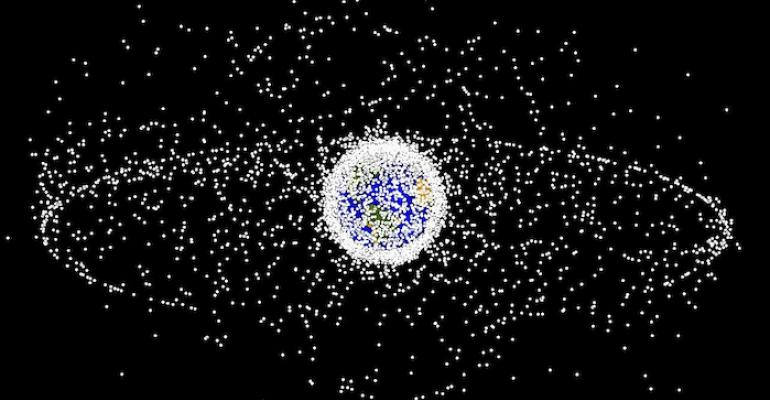 When bad movies make good predictions and how to lessen the Kessler Syndrome with everything from AI to space harpoons.

It was an odd movie by most accounts. “Space Milkshake” was a 2012 Canadian science fiction cult comedy film that followed the exploits of four blue collar astronauts in the future who were stuck together on a Sanitation Station orbiting the Earth. Their main purpose was to shoot down enough space junk to maintain a clean corridor for traveling space craft. But the real story evolved around avoiding an earth destroying event from a time-traveling duck. But I digress.

Flash forward (or would it be backward) to the recent past, the week of May 30, 2019. On that day, Elon Musk’s space company fired 60 small satellites on the company’s SpaceX rocket. These communication satellites were the first installment of an internet-beaming mega-constellation that the company hopes will grow to include thousands of satellites over the next few years.

Then, on November 11, SpaceX launched another 60 Starlink satellites from Cape Canaveral Air Force Station, Florida. This continue barrage of launches are driven by SpaceX’s contract to have 2,213 Starlink satellites in orbit by March 2024 or face penalties from the FCC. (Sidenote: The November 2019 launch was also the first time that a SpaceX Falcon 9 re-used its fairings. (Think in terms of “cubsats.” But that’s another story.)

Competitors such as United Launch Alliance, ArianeGroup, Amazon/Blue Origin, Virgin Orbit, Stratolaunch Systems, NASA, China and others will be following the SpaceX lead. All want to capture the potentially lucrative business of beaming broadband communications to Earth from space. This is all part of a larger Internet of Space (IoS) movement, which hopes to create a vast computer network in mostly low-earth orbit (LEO) satellites and other platforms that will serve as nodes to communicate with one another and users on the Earth.

The problem is that all these extra satellites will enter a LEO that is already overcrowded with almost 2,000 existing satellites, nearly 3,000 dead satellites and around 34,000 pieces of space junk larger than 10 centimeters in size, according to the European Space Agency’s (ESA’s) Space Debris Office.

It takes surprisingly little to make space debris a real collision hazard. And size does matter! It’s all back to basic physics: F=MA. For example, a fleck of paint (very small mass) traveling at nearly 17,900 miles per hour (high acceleration for a paint chip) could cause major impact damage (via force) if it slams into a satellite.

Increasing the number of satellites in orbit will increase the risk of collisions that could lead to the catastrophic Kessler syndrome. (Recall the 2013 film “Gravity?”) First proposed in 1978 by the NASA scientist Donald J. Kessler, the syndrome represents a scenario in which the density of objects in low Earth orbit is high enough that collisions between objects could cause a cascade in which each collision generates space debris that increases the likelihood of further collisions. One implication is that the distribution of debris in orbit could render space activities and the use of satellites difficult for many generations.

Currently, whenever space junk or the parts of a defunct spacecraft gets too close to an active satellite, the satellite’s operator must perform a collision-avoidance maneuver. The football size, 450-ton International Space Station (ISS) has had to move a few times to avoid serious collision with space debris.

Now let’s return to the “Space Milkshake” movie.  Rather than move the ISS, what if we could somehow neutralize the collision threat. The European Space Agency’s (ESA’s) Clean Space Initiative, with help from global universities and NASA, is looking to do just that.

One way to clean up potentially dangerous (and litigiousness) space junk and debris would be to launch a chaser which would go and capture the larger pieces. Yet, this represents a challenging task as these debris’ items are often uncontrolled and therefore difficult to rendezvous with and secure. But artificial intelligence (AI)  could help catch former satellites.

ESA’s Advanced Concepts Team and Stanford University in the US are working together to use machine learning (ML) and AI technologies to determine the best way to estimate the distance and orientation of an object in space.

Once the space targets have been identified and precisely located, the next step is to capture them. One of the more interesting commercial efforts to capture space junk is the recent RemoveDEBRIS mission, a satellite research project lead by the Surrey Space Centre from the University of Surrey. Partners on the project include Airbus, ArianeGroup, Swiss Center for Electronics and Microtechnology, Inria, Innovative Solutions In Space, Surrey Space Centre, and Stellenbosch University.

Early in 2018, the RemoveDEBRIS mission launched on a SpaceX Dragon rocket platform during a resupply to the ISS. The mission itself was deployed a few months later. The mission utilized imaging technology and other sophisticated equipment, plus a harpoon and net (produced by Airbus) to capture space debris, starting with the biggest chunks first.

RemoveDEBRIS carried out a test of its onboard vision-based navigation (VBN) system on October 28, 2019. The test witnessed the RemoveDEBRIS spacecraft release a target cubesat and then take images of the descending object and its surroundings using its flash LiDAR and camera. This information provided information critical for measuring distance, direction and speed of space debris, which would be necessary for the second phase of the test.

In September, the spacecraft containing RemoveDEBRIS used a net to capture a deployed target (a cubsat) simulating a piece of space debris. Future plans call for the use of a space harpoon where a space net might not be practical.

This appears to be the first time in human history of space-based active debris removal (ADR) technology. Although some readers might remember the 1980’s US Strategic Defense Initiative which proposed the use of kinetic nets to disarm (not really capture) LEO and lower foreign misses.

Other ongoing initiates are looking to melt space debris in place or push it into the earth’s orbit where gravity will do the same thing. All these efforts can’t come soon enough if we are to clean up the communication and traveling hazards that have been caused in space. Perhaps this will also lessen the dangers from future time-traveling space ducks.