Innoviz Designed a LIDAR to Make Any Car Autonomous 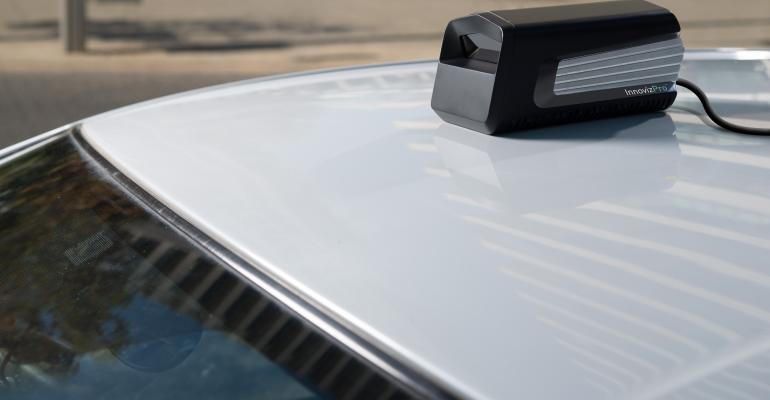 Israeli startup Innoviz is pushing for a landscape where LiDAR is powerful and affordable enough to bring autonomy to any car.

LIDAR has been and is going to continue to be one of the key technologies behind self-driving cars. A January 2018 report from Research and Markets has predicted the global automotive LIDAR sensors market to grow with a CAGR of 35.2% over the period of 2017-2023. But LIDAR isn't perfect. To take cars from where they are today all the way to level 5 autonomy (no steering wheel and no human driver intervention required) the laser sensors are going to have to get better, cheaper, and easier to integrate into vehicles.

That's where Innoviz comes in. The Israeli company, one a new crop of automotive startups to appear around the autonomous vehicle space in recent years, is focusing on creating a LIDAR sensor that is affordable, powerful, and can be implemented into any car to provide level 3 through level 5 autonomy.

“The onset of autonomous vehicles sets a very ambitious timeline for development and commercialization. In order to meet this aggressive timeline, an automotive-grade LiDAR that meets the industry’s stringent requirements for performance, affordability, reliability, and size must become available in order to help the industry reach mass commercialization,” Omer Keilaf, CEO and co-founder of Innoviz told Design News. “We recognized early on that automotive-grade, affordable, and reliable LiDAR would be necessary to make the mainstream commercialization of autonomous vehicles a reality, but that existing LiDAR solutions all fall short in delivering the performance, reliability, safety, and price requirements for fully autonomous vehicles.

“Of course, delivering on all of these demands for performance, reliability, maturity, size, and affordability requires a complex operation that inherently involves many risks. Any delay in execution can cause significant delays down the line.”

Earlier this year, Innoviz, which was founded in January 2016 by former members of the elite technological unit of the Israeli Defense Forces, released its flagship product, the InnovizPro – an automotive grade LIDAR sensor that aims to be a mass market solution for self-driving cars. The InnovizOne is a stand-alone, solid-state, MEMS-based, scanning LiDAR sensor. According to company specs the device, which measures 73 x 66 x 165 mm, creates a dense 3D point cloud at a frame rate of 20 fps, with a 73 x 20- degree field of view and angular resolution of 0.15 x 0.3 degrees, that enables object detection, classification, and tracking at long distances (up to 150 m). Keilaf added that the point cloud is generated with no addition processing needed inside the InnovizPro itself. “All computer vision is handled by the vehicle or any other host, which can also be cloud based,” he said.

Keilaf said that a solid-state solution offers a number of benefits in terms of cost and design.

“Mechanical spinning LiDARs and other types of LiDARs suffer from major shortcomings that prevent them from providing the type of performance and safety required for levels 3-5 of autonomous driving,” he said. “They are also unreliable, overly large, and come at exorbitant cost. In order to fix the design and performance flaws of existing LiDAR solutions, we had to redesign most of the components in the system and invent a new solution from the ground up.” Innoviz's solid-state design allows its LIDAR to have a long life expectancy, be more affordable, and allow for seamless integration into vehicles, according to Keilaf.

Innoviz has already established relationships with tier-1 suppliers that have committed to integrating its LIDAR into their autonomous driving systems including Aptiv, Magna International, and Samsung. The company also offers an SDK for the InnovizPro that Keilaf said the company hopes third-party developers will use to develop applications beyond automotive as well. “The InnovizPro SDK can be used to enable 3D computer vision software in fields outside of the automotive market such as drones, industrial, and surveillance. We also intend to integrate our LIDARs and data formats to common point cloud or 3D data visualization software by third parties,” he said.

The company has also targeted the release of its next product, the InnovizOne, for 2019. The InnovizOne will be an automotive-grade LIDAR, but will offer improved performance. Right now the company is promising a 25 fps frame rate, 120 x 25-degree field of view, high-resolution 3D video capabilities, and a detection range of up to 250 m. The InnovizOne will also support new features such as simultaneous localization and mapping (SLAM) for autonomous vehicle navigation, object tracking, lane detection, and object detection and classification.

While Keilaf said solving the vision problem for autonomous vehicles is Innoviz's focus right now, the company hopes it will be able to expand its LIDAR technology into additional markets such as mapping, fleet management, security and surveillance, industrial automation, and logistics. Innoviz also develops 3D computer vision software to analyze the point clouds generated by its LIDARs. “This software is crucial for delivering superior object detection and classification, detection of drivable area, detection of lane markings and other features that help self driving vehicles understand the scene around them,” Keilaf said.

“On the hardware side, we are already thinking about our next generation LIDARs and any variants of the InnovizOne in order to create a great product-market fit for the variety of self driving use cases,” he added. “In a fast-paced and dynamic market, Innoviz needs to keep on striding forward and ensuring that it provides the market with the holistic solution it requires.”