Imagine a World Where the IoT Is Powered By Body Heat 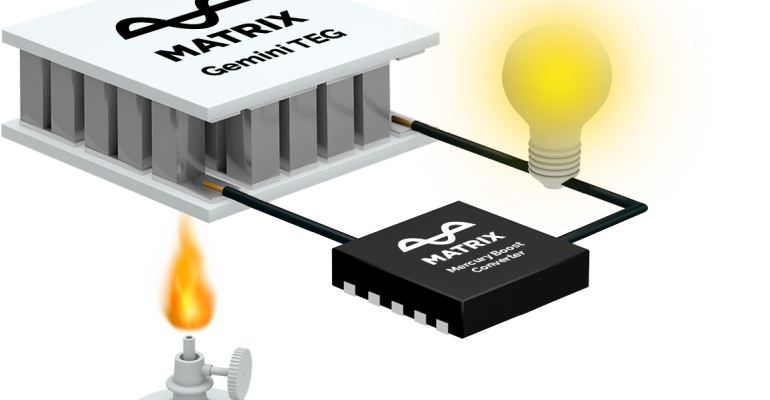 What if all of the Internet of Things (IoT) devices out there could power themselves using body heat from the people that use them?

Energy harvesting is often discussed as a innovative solution for powering IoT devices. The idea is to generate power from a devices surrounding environment (such as body heat from a person wearing a smartwatch). However, the fact that the small temperature differential produced between a human body and its surroundings creates very little voltage has posed a real challenge.

That challenge is being tackled directly by Menlo Park, CA–based Matrix Industries. The company, which has been producing thermoelectric generators (TEGs) since 2011, has recently developed a novel circuit capable of harvesting energy at temperature differences less than 1C (equivalent to 1.8 degrees Fahrenheit).”

TEGs are semiconductor devices that can convert temperature differences to electricity or vice versa based on the Peltier or the Seeback effect. While TEGs themselves are not a new concept, Matrix has developed a TEG with a circuit topology that facilitates energy transfer at voltage levels below 10 mV – levels that were previously assumed to be too low to be considered useful. This circuitry allows for thermoelectric generation across very small temperature differential.

Credit for the latest breakthrough goes to Harald Dillersberger, an Austrian doctoral student who has since joined the company as its Principal Electronic Design Engineer and will be speaking at the upcoming 2019 Embedded Systems Conference (ESC) in Boston.

So how much power can these TEGs produce? "With the low-resistance modules you can get a few tens of microwatts,” Matrix CTO and co-founder, Douglas Tham, told Design News. “It doesn't sound like much, but there are many applications that only need that much. For example, an analog watch only consumes a couple of microwatts. And an IoT Bluetooth beacon is now down to around 10-20 microwatts. Even an IoT device that monitors agriculture and only has to transmit once every few hours, you can really cut down on the power consumption drastically."

Gemini utilizes “nanoholes,” a way of "bulk-nanostructuring the material," to insert billions of holes at the right spacing in such a way that would "slow down the flow of heat without impeding the flow of electricity," Tham explained.

Matrix arranges the material into nanostructures, or “blocks,” that can be turned on and off. It's something researchers have been trying to do for a long time and provides advantages in both startup voltages and efficiency. This is what Tham calls the “special sauce” of Matrix's TEGs. “You don’t want blocks on when you don’t need them. The invention is how you turn that block off,” Tham said.

Simply placing a TEG module equipped with this capability on one's wrist can generate enough electricity to power a smartwatch. Recognizing this opportunity, Matrix launched a successful Indiegogo campaign that led to the Matrix PowerWatch, a smartwatch powered entirely by body heat.

In order to make the PowerWatch possible the functionality demonstrated by Dillersberger's early prototypes had to be miniaturized and made to operate at very low voltages, something that off-the-shelf components could not do. That's where a partnership with Cactus Semiconductor (now a part of Cirtec Medical) came in to play.

Cactus, a provider of low-power mixed-signal application specific integrated circuits (ASICs), was able to incorporate all of the circuitry and power management functionality (except the transformer) into a tiny, custom chip. This chip serves as an energy harvesting interface and is able to operate on almost no power at all, according to Cactus.

But while the PowerWatch has been a successful sideline for Matrix, the main focus is on the broader range of IoT device, the many sensors and transmitters that would benefit from the ability to self-generate power.

At the same time, Matrix recognizes that these devices may need power in places where there simply aren't dependable temprature differences. As an example of addressing this issue, the upcoming Powerwatch 2 will incorporate and manage multiple sources of power with the addition of a solar cell. "This is really more important for an IoT type of device where you're now a sensor node out in the middle of nowhere,” Tham said. “If you have heat, use heat; if you have light, use light; if you have motion, use motion. That way you have a device that you can be sure will work in 99% of situations."

Meanwhile, the larger-scale challenges around the need for sustainable sources of energy are not lost on Tham. The use of thermoelectric devices for energy recovery and renewable generation in conjunction with geothermal sources are things they are very much involved in. While it's too early to discuss yet, Tham said Matrix is looking at modules, "for off-grid, niche applications" that will require TEGs capable of producing hundreds of watts.

Correction: A previous version of this article misquoted the temperature differential at which the TEGs harvesting energy. It should be 1C (equivalent to 1.8 degrees Fahrenheit). Design News regrets the error.