If Trump Pulls Back on 54.5-MPG Mandate, EV Sales Could Stall 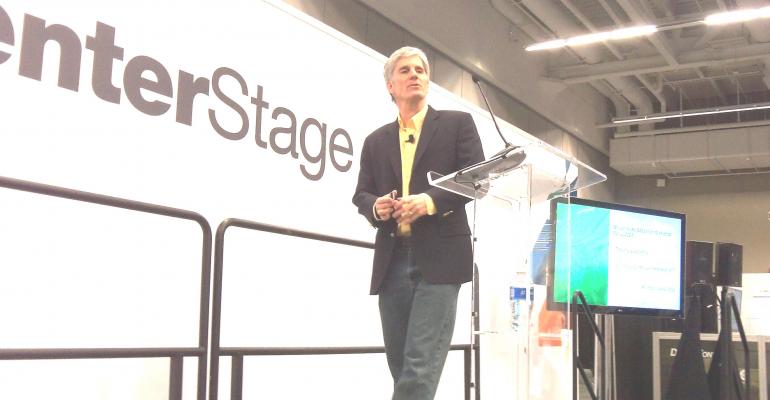 Without the mandate, the US could fall behind other countries in the EV market, ultimately becoming a technological “backwater,” expert says.

Government officials are expected to ease off the 54.5 mile-per-gallon federal fuel efficiency mandate in the coming weeks, raising concerns about the future of electric vehicle technology in the United States.

“The next two months will define the next six years,” Brett Smith of the Center for Automotive Research told attendees at this week’s Cleveland Advanced Design & Manufacturing Show. “This is the last chance before 2025 to get the law set.”

Smith told the audience that for electric cars to achieve greater success, automakers need the motivation that the mandate provides. Electric vehicle sales are already weak in the US, he said, and would get worse without the push that the 54.5-mpg standard provides. Last year, sales of new plug-in hybrids and battery-electric cars were less than 200,000, or about 1.15% of the 17.25 million national sales total.

“You hear so much about electrification, yet you look at the sales numbers and they’re not there,” he said. “People are not buying this technology. People are buying and loving big trucks, big SUVs, and big CUVs.”

The mandate, as proposed by the Obama Administration in 2011, calls for automakers to reach a corporate average fuel economy of 54.5 mpg across their fleets by 2025. To do that, they would need to implement huge technological changes because the industry’s current average is approximately 30 mpg. The only way to reach it would be for automakers to add significant numbers of plug-in hybrids and battery electric vehicles to their mix, which would boost the overall average.

The Trump Administration, however, is not expected to leave the mandate intact after it reaches its mid-term evaluation point on April 1st. “In early February, there was guidance quietly given that there would be pullback on the regulations,” Smith said. The “pullback” could involve special credits and loopholes, enabling automakers to more easily meet the standard, Smith added. Or it could involve a reduction in the 54.5-mpg figure. Either way, it would affect the number of electric vehicles that automakers build.

Smith said the State of California would fight any rollback of the mandate, as would the US EPA. But California has little say in matters of federal law, and the EPA has less influence in the Trump Administration than it did in the Obama Administration.

Without the mandate, the US could fall behind other countries in the EV market, ultimately becoming a technological “backwater,” Smith said. China, he said, is aiming to be a world leader in the technology through the development of laws that compel consumers to buy EVs. Similarly, India has set a target of 2030 to cut off production of gasoline-burning vehicles. And Norway, The Netherlands, Ireland, France, and the UK have set laws in motion to stop sales of conventional, gas-burning cars at some point in the future.

To date, however, US government incentives have failed to make a big difference in EV sales. The federal government continues to offer a tax break of $7,500 to consumers for the purchase of zero-emission vehicles. And some states offer as much as $5,000. Still, sales have not been strong.

“Every car company I talk to, with a few exceptions, says, ‘We think it’s a very limited application,’” Smith said. “’It’s not likely to be good for pick-up trucks. It’s not likely to be good for SUVs because the batteries are too big. Also, the current battery technology is getting better but it’s not going to have the fast refill time that we’re used to with gas stations.’”

“These vehicles will not sell very well yet," he told the audience. "But they'll sell even less well without incentives.”

We know our comment section isn’t working for most readers. If you have a comment, send it directly to [email protected] and we will publish it in a future article. Just keep it concise (60 words or less) and type the words “story comment” in the subject line.