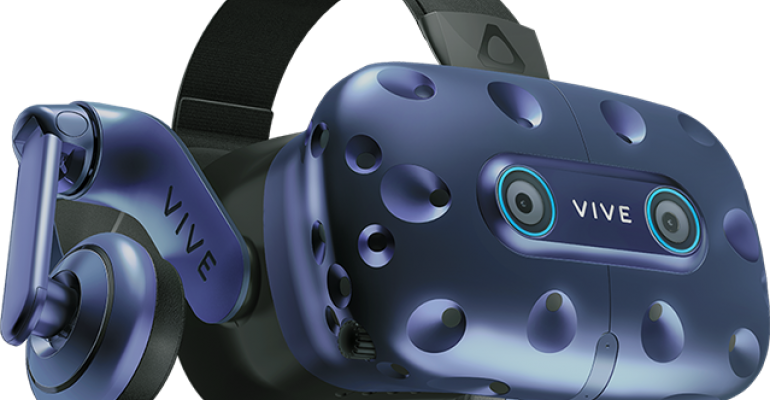 <p><strong>HTC</strong></p><p>Long viewed as the main competitor to Oculus in the VR entertainment sphere (particularly in PC gaming), HTC added a new wrinkle to its traditionally consumer VR-focused product portfolio with the release of the <a href="https://www.designnews.com/electronics-test/vive-pro-htcs-push-better-enterprise-vr/131728862558582" target="_blank">HTC Vive Pro</a>. The Vive Pro was HTC's first VR product targeted at the enterprise market – offering a 78% increase in resolution over the original Vive headset. HTC's aim with the Vive has been to attract enterprise users interested in users interested in virtual collaboration and product design as well as other application.</p><p>In 2019 the company released an upgraded version – the <a href="https://www.designnews.com/electronics-test/htc-vive-pro-eye-brings-eye-tracking-engineers-vr/9073297860970" target="_blank">Vive Pro Eye</a> (shown above) – with integrated eye-tracking technology from Swedish company Tobii. Using Tobii's infrared tracking system, the Vive Pro eye can allow users to move about and control VR environments hands-free using only their eye movements.</p><p><em>(Image source: HTC)</em></p>
With its latest enterprise headset, the Vive Pro Eye, HTC is bringing eye tracking control to engineers who use VR in their workflows.

With VR headsets already getting more compact and embracing wireless connectivity. The next frontier for VR will be the control scheme. While there are a handful of options available or being developed today – from the standard wireless touch controllers most VR users are now familiar with, to novel applications that use sensors to track hand movements as with the Leap Motion controller – HTC is betting the best option for engineers and enterprise users will be eye tracking.

The Vive Pro Eye uses near-infrared (NIR 850nm) to scan the wearer's eye movements and employs nine IR LEDs and one IR camera per eye (18 LEDs and two cameras total). The sensor array allows the headset to track eye movements with an accuracy of 0.5 to 1.1 degrees across the headset's entire 110-degree field of view. In addition to gaze origin and direction (tracking exactly where a user is looking), the Vive Pro Eye can also collect data on pupil position, pupil size, and eye openness.

The big advantage here is allowing users a hands-free method of accurately controlling and navigating a virtual environment. Anyone that has tried to type on a virtual keyboard using wireless controllers already knows how grueling that process can be. But imagine if you could type simply by looking at the letters on the keyboard instead. Then expand that same type of functionality into other applications such as virtual product design.

Tobii has already been using eye tracking to gather user experience data when interacting with systems and environments.. But the ability to accurately track eyes can also allow for improved graphics by facilitating foveated rendering. Rather than fully rendering an entire image in as high of a quality as possible (which can be taxing on a processor), foveated rendering mimics the way the human eyes sees the world – by putting things in the center of vision in clearest focus and blurring things in the periphery. Doing this not only puts less workload on a system, it also allows for more parity between the real world and the virtual renderings.

“The Vive Pro Eye takes [eye tracking] technology one step further as the demands for enterprise-grade VR continue to grow and evolve,” said Dan O’Brien, General Manager of HTC Americas, said in a press statement. “From more effective training to more insightful data analytics, it provides professional users with the tools to continue improving the way businesses use VR in an everyday capacity.”

According to HTC, the Vive Pro Eye's tracking capability makes it ideal for a number of use cases beyond being a control scheme - from creating more expressive online avatars that mimic the user's eye movements, to more robust VR training that provides intelligent, real-time performance feedback

For example, ZeroLight, a provider of real-time 3D solutions to the automotive industry, has partnered with BMW to use the Vive Pro Eye for a virtual retail experience that lets customers configure, customize, and explore their virtual BMW. Using eye tracking the company gives users an easy control method to design their car, better image quality via foveated rendering, and the ability to capture analytics to understand how customers interact with the vehicle.

The Vive Pro Eye is currently available in North America.