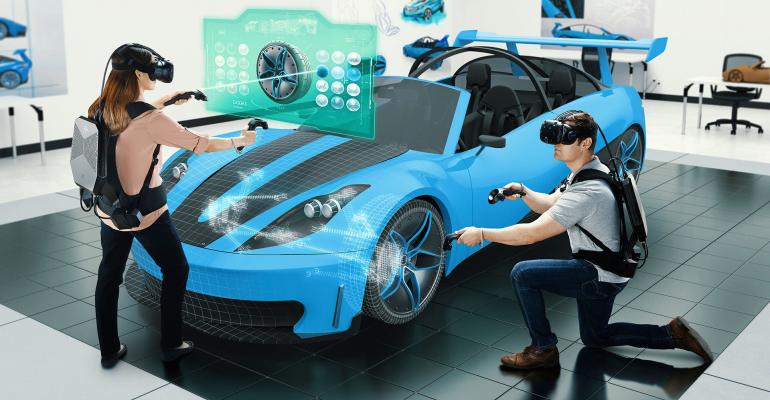 HP has unveiled the Z VR Backpack, a wearable PC for enterprise VR applications. But will the new design be a step forward or a detour on the road to wireless VR?

As VR (virtual reality) looks to transform itself into an increasingly more mobile (aka convenient) experience HP has debuted a novel solution to the wires and tethers associated with VR today – a backpack.

At SIGGRAPH 2017, HP announced the HP Z VR Backpack, a 10-lb, wearable PC with enough horsepower for both experiencing and creating VR content. While it is easy to imagine the entertainment potential of the Z VR, HP has made it clear that it wants its new wearable PC to be catalyst for bringing more robust VR experiences to business and enterprise first and foremost. Safer simulation and training, virtual walkthroughs for architectural design, and better collaboration in virtual environments for product designers, are just a few of the use cases cited by HP.

At its core the Z VR Backpack is a Windows 10 PC with an Intel Core i7 processor, 32 GB of SDRAM, a Nvidia Quadro P5200 GPU, and up to 1 TB of internal storage. It measures in at 13.11 x 9.29 x 2.39 inches and weighs 10.25 lbs according to specs released by HP. The backpack is powered by a 55Whr lithium-ion battery and features two, external portable 74 Whr hot-swappable batteries. The Z VR can also be docked and serve as a desktop PC.

If you've had a chance to try VR for product design you know that the cords and wires can make for a very cumbersome (and potentially unsafe) work experience, particularly with multiple users operating in the same physical space. Without some sort of handy rig overhead to manage the wires and someone to spot you and hold the cords connecting your headset and controllers to the workstation, it only takes a few turns before you end up wrapped in cable clutter.

Placing VR into a backpack form factor goes a long way in addressing the cable clutter issues, but in hands-on demonstrations at SIGGRAPH it feels like comfort is still a big issue. At 10 lbs the backpack itself is not terribly heavy, but it is just heavy enough to be noticeable and one wonders how it will play out with extended use – particularly if adapted to more physically demanding tasks like entertainment (live-action shooting games) or design sessions that require prolonged standing.

The other issue, which to be fair is completely outside of HP's control, is the weight of the headset. The latest version of the HTC Vive weighs in at just over a pound. That may not sound significant but it becomes very noticeable when it's attached to your moving head (also consider a pair of reading glasses only weighs about 30-40 grams). Anyone that has ever worked out will tell you that adding a total of about 11 lbs to your bodyweight can have a significant impact.

But headsets are only promising to get lighter. Kopin, a manufacturer of lightweight displays, recently unveiled a reference design, codenamed Elf VR, that will used patented microdisplay panels to create a VR headset the company estimates will be about 50% lighter than headsets currently available.

The move to untethered VR with internal tracking must also be considered. Oculus and HTC have promised the next generation of their headsets will be wireless and companies including Microsoft and Qualcomm are working with partners to deliver untethered headsets as well. A lightweight, wireless headset that delivers the same fidelity as a tethered headset could make the placement of a workstation entirely irrelevant.

Depending on how long it takes for wireless VR products to roll out wide, HP's backpack could catch on with customers too impatient for untethered solutions. We'll have to wait and see whether the backpack PC becomes a standard or a footnote, but for now it may offer a good intermediary step toward fully free VR.

What do you think of HP's VR Backpack solution? Let us know in the comments.