How the New Quantum 'MESO' Architecture Could Replace CMOS 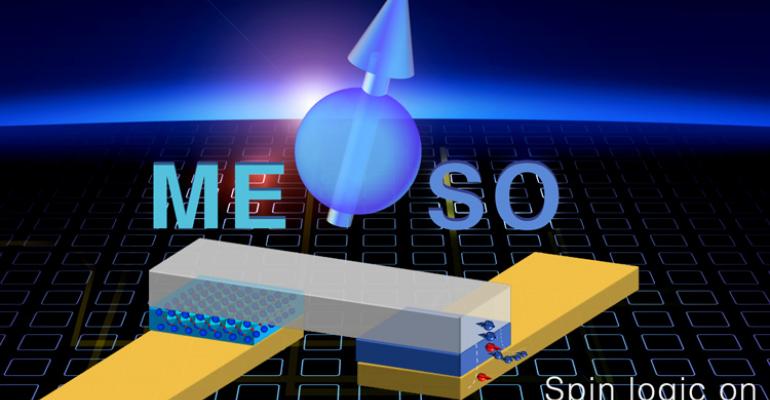 Researchers at Intel and UC Berkeley are working on a new transistor technology based on magnetoelectric and spin-orbit materials that offers several advantages over CMOS.

According to Ramamoorthy Ramesh, a UC Berkeley professor of Materials Science and Engineering, projections show that the explosion of sensors and computing devices that will constitute the Internet of Things (IoT) – numbering perhaps in the billions – could lead to such an increase in energy demand that electronic devices could comprise as much as 20% of all energy consumed.

That's a drastic increase compared with 4-5% today. And just that is enough to justify the search for a new, more energy efficient computing architecture. However, a second challenge has to do with computationally intensive, real-time machine learning applications, such as driverless vehicles, that struggle to achieve the required response times. The two challenges can be viewed together the lens of tera-operations per second (TOPS) per watt, described in this earlier story, which reveals a gap of "several orders of magnitude."

Sasikanth Manipatruni, who leads a hardware development project at Intel's Components Research group, sees the problem through yet another lens: Heat. Some of the new AI-chips use so much power that they need to dissipate as much as 100 W/sq. cm or even more. This often requires that the chips be turned off periodically for cooling purposes, which clearly affects performance.

With Moore's Law, which has blessed the computer industry since its inception, running out of steam (Intel itself is struggling to scale their transistors below 10nm), can the current generation of CMOS-based devices provide the level of performance and energy efficiency required for tomorrow's applications?

Ramesh and Manipatruni have been working together to develop a new architecture that shows great promise in answering that question. An essential component was addressing what Ramesh calls the "memory wall," which is essentially the time it takes to move information in and out of memory and back to the processor. The new architecture is based on a set of quantum materials called multiferroics, materials that inherently exhibit both magnetic and electric polarizations, that, in essence, allows the memory and the processor to be co-resident in the same space. The two recently published a paper about it in Nature entitled "Scalable energy-efficient magnetoelectric spin–orbit logic."

The paper describes a logic switch, that uses magnetoelectric spin-orbit (MESO) logic to operate at 10-18 joules – roughly six orders of magnitude lower than the energy consumption of CMOS. While a great deal of innovation is still required to bring this to market, says Ramesh, "If these innovations happen, there is a good pathway for us to go and make the next generation of microelectronic components."

The new logic switch came about as the result of two separate developments. First, came the development of room temperature magnetoelectrics by Ramesh's group at Berkeley. This material could enable processing, memory, and interconnect all together, with the capability to do this at an operating voltage as low as 100mV.

This was all very promising, but it left out one key piece: How do you read out from the device?

That discovery occurred in 2012 when Manipatruni attended a lecture by French Nobel laureate Albert Fert describing a phenomenon called spin orbit transvection that provides a means of sensing. Manipatruni knew immediately that this could be combined with the multiferroics developed at Berkeley to achieve the desired result. Still it took six years to put it the first MESO device together.

According to Manipatruni, some 40-50 topologies have been considered since the late 90's, but none of them could meet all the combined criteria until now. This new architecture does it, and it does it with extremely high energy efficiency.

The MESO device, which, at this point, is a fairly primitive prototype, is really a hybrid of spintronics and a charge-based device. Still, Manipatruni calls it, "a path-setting development."

While it may not strictly fall within the definition of Moore's Law, it will allow manufacturers to continue down the computer scaling path. This is critical because every time you reduce size by a half, you reduce power by a factor of eight.

"If you use these new functionalities, you can make a spintronic-based device that can do both your logic and do memory at the same time,” Ramesh said. “That's the big innovation. Unlike CMOS, where you use a transistor to do it, we're saying we can use 'collective phenomena,' where a ferromagnet is a collective quantum-mechanical phenomenon. A ferroelectric is a collective phenomenon, an electron in a CMOS is not a collective behavior. So we're saying that we can use internal energies of the material to try to go to a different energy landscape in terms of how much energy is required to make the device work...The MESO device is basically doing spintronics but manipulating everything with electric fields."

That is important because electric fields are generally much lower energy than magnetic field.

People are doing spintronics today using spin transfer torque, which consumes a lot of energy because you have to run current to control the magnetic field. It's also important to note, Ramesh said, that although quantum materials are being used, "this not to be confused with quantum computing, which is another thing altogether."

The use of ferroelectric materials also means this approach is intrinsically non-volatile. This means that the memory retains its contents even when the power is switched off. "We believe this will be a big advantage in terms of energy consumption, Ramesh said. Reducing power also reduces heat, of course, which means you can then add more AI chips into a car without overheating.”

While people had been studying multi-ferroics for it while, it was really the killer app of high-speed AI, that has brought renewed interest.

"The purpose for this is to trigger this type of innovation across the industry and academia,” Manipatruni said, referring to the Nature study. “There are devices out there that work at room temperature and keep us going on the computer scaling path. That's the first message." The second is that "there are many critical techniques that need to be developed for this to happen: The power, delivery, the clocking, new computer architectures, etc."