Growth In Electric Buses Is the Key To Electrification 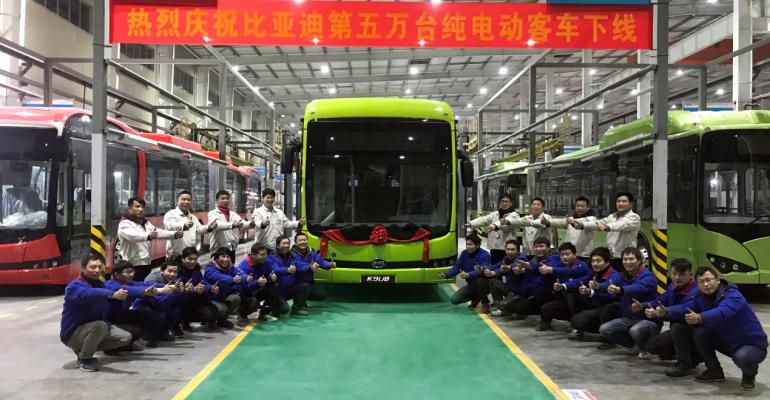 Transportation systems around the world are discovering the cost and air quality advantages that battery electric buses can offer.

Electric buses are the best way for electric vehicles (EVs) to deliver on their promise of dramatically improving air quality and reducing CO2 emissions.

According to Bloomberg, production of electric buses will advance more rapidly than electric cars, spurred on by lower ownership and operating costs in addition to reduced emissions. There are already more than 300,000 electric buses on the road worldwide, with 99% of them deployed in China. Bloomberg expects 80% of the world’s bus fleet to be electric by 2040.

One company that has expanded its electric bus business from its Chinese roots to a worldwide scale has been BYD (“Build Your Dreams”). Since building its first pure electric bus , the K9, in the city of Changsha in 2010, BYD has actively sought markets for its vehicles. The company now has electric bus projects in 300 cities worldwide. In January of this year it rolled out its 50,000th electric bus from its Hangzhou factory, a bus that is expected to enter service in Badajoz, a city in southwestern Spain.

In a press release about the production of its 50,000th bus, Wang Chuanfu, President and Chairman of BYD Company Limited said, “Our track record demonstrates a clear market recognition of and trust in BYD products,” He went on to add, “BYD has set a ‘Gold Standard’ for the pure electric bus market because of its rock-solid product quality, a complete supply chain and product solutions, and leading core technologies in areas such as batteries, motors and electronic controls. This is a thumb's up for not only China's electric vehicle industry—but the world's.”

Battery-operated electric buses are proving to have significantly lower overall costs than their diesel-powered equivalents. For example, BYD has demonstrated a 60% saving in operating costs as well as a 75% saving in maintenance costs compared to a standard diesel-powered articulated bus in a fleet in the Colombian city of Medellín.

Electric buses typically have a range of 200-250 kilometers (120-155 miles) between charges, allowing most buses to run a half-day or more before requiring the battery to be recharged. Wireless recharging is one area that is under study and might allow the buses to be recharged while on their route.

In the US, BYD has delivered battery-electric buses to more than 40 cities, including Atlanta. The company has built a 450,000 square-foot manufacturing facility in Lancaster, California and has 750 employees in the US.