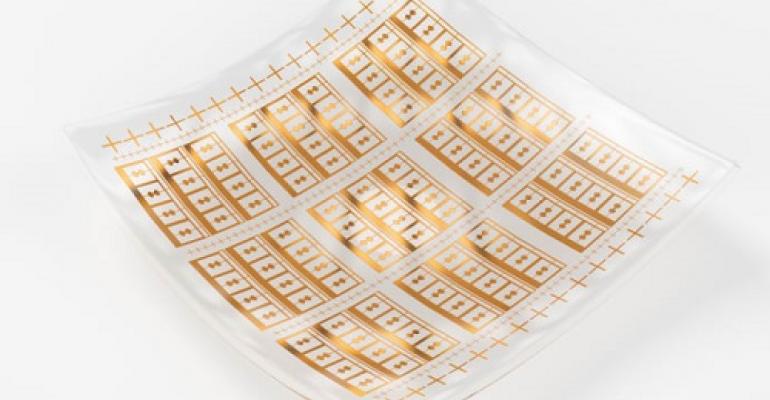 Graphene has enabled the development of the first flexible terahertz detector, paving the way for high-powered electronics on flexible materials.

Graphene has shown its mettle as a breakthrough material yet again, with researchers using it to enable for the first time the development of high-power electronics on flexible, inexpensive materials.

Researchers at Chalmers University have developed a flexible detector for terahertz frequencies using graphene transistors on plastic substrates. The detector—which converts RF energy to a DC signal so the power of the signal can be measured—is the first of the kind, said Jan Stake, professor and head of the Terahertz and Millimetre Wave Laboratory in Chalmers’ Department of Microtechnology and Nanoscience.

“A detector is a key component in any high-frequency application,” he told Design News. The device can extend the use of terahertz technology to applications that will require flexible electronics, such as wireless sensor networks and wearable technology.

Indeed, terahertz radiation—which refers to the electromagnetic waves with frequencies ranging from 100 gigahertz to 10 terahertz--has a wide range of uses and can occur in everything from radio astronomy to medicine.

Researchers have increased interest on developing systems and components for terahertz frequencies due to the demand for higher bandwidth in wireless communications and depiction for security applications.

However, one challenge to developing these systems and components has long been how to create them in a way that is inexpensive and so that they don’t have excessive weight.

This is where the ability to use polymer and flexible substrates to develop high-power electronics is key, and where graphene comes in handy, Stake said.

“Graphene is a promising material for high-frequency application thanks to high carrier mobility, and mechanically strong for just a monolayer,” he said. “This combination can open up for flexible terahertz applications.”

Stake worked with fellow Chalmers researchers Xinxin Yang, Andrei Vorobiev, Andrey Generalov, and Michael Andersson to develop the detector. The team published a paper on their work in the journal Applied Physics Letters.

At room temperature, the detector—which is translucent and flexible—can detect signals in the frequency range 330 to 500 gigahertz, researchers said. This technique has a number of applications, including for imaging in the terahertz area—such as in a terahertz camera--as well as for identifying different substances, such as in sensors.

The detector also could be applied in health care, where terahertz waves can be used to detect cancer, researchers said. Imaging sensors for vehicles or for wireless communications also are potential applications.

The detector also highlights the possibilities to use graphene to enable terahertz applications, Stake said. Graphene is emerging as a material that has versatile uses due to its light weight and ability to conduct electricity extremely well, among other features.

In addition to their research paper, the Chalmers team also published the below video about their work.