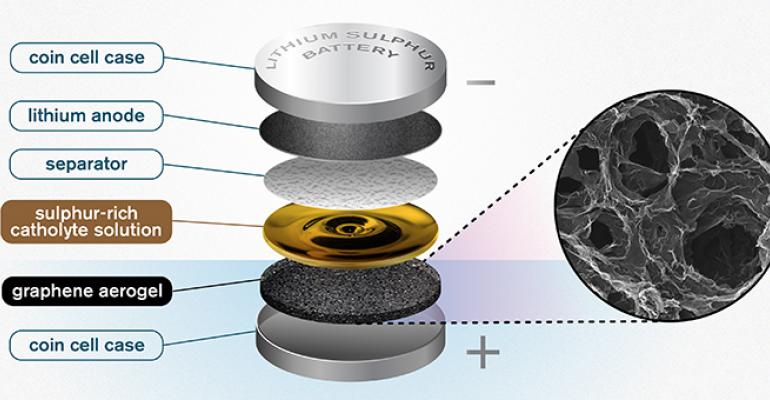 But the problem with lithium sulfur batteries is their instability, which causes a low cycle life. Current versions degenerate fast and have a limited life span—they can only operate with an impractically-low number of cycles.

“Sulfur is cheap, highly abundant, and much more environmentally friendly. Lithium sulfur batteries also have the advantage of not needing to contain any environmentally harmful fluorine, as is commonly found in lithium ion batteries,” said Aleksandar Matic, Professor at Chalmers Department of Physics, in Sweden, who led the research group with a goal to improve the performance of lithium sulfur batteries. Their work is described in a Chalmers news release.

According to the researchers at Chalmers, using a catholyte with the help of a graphene sponge can dramatically improve the lithium sulfur battery cycle life. In testing their new prototype, the Chalmers researchers demonstrated an 85% capacity retention after 350 cycles.

According to the news release, “The researchers previously experimented with combining the cathode and electrolyte into one liquid, a so-called ‘catholyte’. The concept can help save weight in the battery, as well as offer faster charging and better power capabilities. Now, with the development of the graphene aerogel, the concept has proved viable, offering some very promising results.” Graphene is an allotropic form of carbon that consists of a single layer of carbon atoms arranged in a hexagonal lattice.

“You take the aerogel, which is a long thin tube, and then you slice it—almost like a salami. You take that slice, and compress it, to fit into the battery,” said Carmen Cavallo of the Department of Physics at Chalmers, and lead researcher on the study. Next, a sulfur-rich solution—the catholyte—is added to the battery.

“The porous structure of the graphene aerogel is key. It soaks up a high amount of the catholyte, giving you high enough sulfur loading to make the catholyte concept worthwhile. This kind of semi-liquid catholyte is really essential here. It allows the sulfur to cycle back and forth without any losses. It is not lost through dissolution—because it is already dissolved into the catholyte solution,” said Cavallo. According to the news release, some of the catholyte solution is applied to the separator, the internal physical barrier that prevents contact between the two electrodes, as well so that it can fulfil its electrolyte role. This also maximizes the sulfur content of the battery.

From the Chalmers release, “The new design avoids the two main problems with degradation of lithium sulfur batteries—one, that the sulfur dissolves into the electrolyte and is lost, and two, a ‘shuttling effect’, whereby sulfur molecules migrate from the cathode to the anode. In this design, these undesirable issues can be drastically reduced.”

Although the results are promising, the research is really only in its initial stages. As with so many results from battery research, the chances of these aerogel graphene lithium sulfur batteries hitting the market any time soon are remote. "Since these batteries are produced in an alternative way from most normal batteries, new manufacturing processes will need to be developed to make them commercially viable," said Matic.