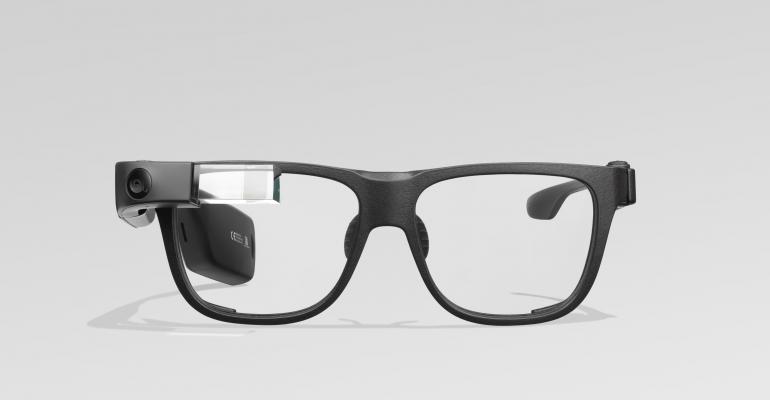 With its latest edition of Glass, Google is looking to expand its enterprise AR footprint with a platform that is more powerful and attractive to developers.

Google Glass has come a long way from a hyped, and in many cases maligned consumer project to its rebirth as a tool for enterprise.

Now, Google has announced the latest version of Google Glass – Google Glass Enterprise Edition 2, with an eye toward making the augmented reality (AR) glasses available to the wider commercial space.

“Over the past two years at X, Alphabet’s moonshot factory, we’ve collaborated with our partners to provide solutions that improve workplace productivity for a growing number of customers—including AGCO, Deutsche Post DHL Group, Sutter Health, and H.B. Fuller...” Jay Kothari, Project Lead for Google Glass wrote in a blog post. ”Now, in order to meet the demands of the growing market for wearables in the workplace and to better scale our enterprise efforts, the Glass team has moved from X to Google.”

Kothari said this latest version of Glass builds on feedback from Google's partners and is aimed toward making it a more attractive platform for developers. “It’s built on Android [Oreo], making it easier for customers to integrate the services and APIs (application programming interfaces) they already use. And in order to support scaled deployments, Glass Enterprise Edition 2 now supports Android Enterprise Mobile Device Management,” he wrote.

Indeed, the Enterprise Edition 2 looks to be an almost ground-up rebuild from the first Glass Enterprise Edition. The Intel Atom processor has been replaced in favor of a Qualcomm Snapdragon XR1 (XR meaning “eXtended Reality”). The XR1 supports video resolutions of up to 4K at 30 frames per second, includes an integrated GPU, and both three- and six-degrees-of-freedom (3DoF and 6DoF) tracking for the headset and external controllers – meaning Glass wearers can have both their head movement and position in space tracked. The XR1 also features Qualcomm's proprietary AI Engine for handling machine learning processing.

Google has also upgraded Glass' camera from a 5-megapixel to an 8-megapixel with an 80-degree diagonal field of view with an eye toward improving Glass' video streaming features.

All in all, it makes for a platform that could be very attractive to developers and engineers and comparatively easy to develop for should enough diverse use cases emerge. Currently, Glass is seeing the most traction among partners in training and telepresence, but with this new expansion Google is clearly hoping new partners will find novel uses for the device.

Originally released in 2013, Google Glass set out to be the iPhone of augmented reality. Google wanted a ubiquitous wearable that would essentially take the place of your smartphone while offering a plethora of new features enabled by AR.

And while Glass caught on with early adopters, consumers (especially those who already had glasses or weren't keen on having to wear them) weren't so hot on the idea. Because of its onboard camera and streaming capabilities concerns over privacy began to arise, with people worried that Glass wearers might be surreptitiously recording them. Backlash over Glass grew to such an extent some began to refer to people who wore Glass in public as “Glassholes.”

In 2015, despite it having already been adopted for enterprise use cases, Google decided to shutter Glass – calling the initial run an experiment and saying that it wanted to focus on the future of the product. It seemed Google was going to take a step back to evaluate just where its head-mounted display stood in the market.

While the move looks to be paying off for Google, it comes just as the market for enterprise AR hardware is heating up. Aside from products from enterprise-focused companies like Vuzix Microsoft has recently announced the HoloLens 2 and Lenovo recently made its first headway into enterprise AR with the announcement of its ThinkReality A6 headset.