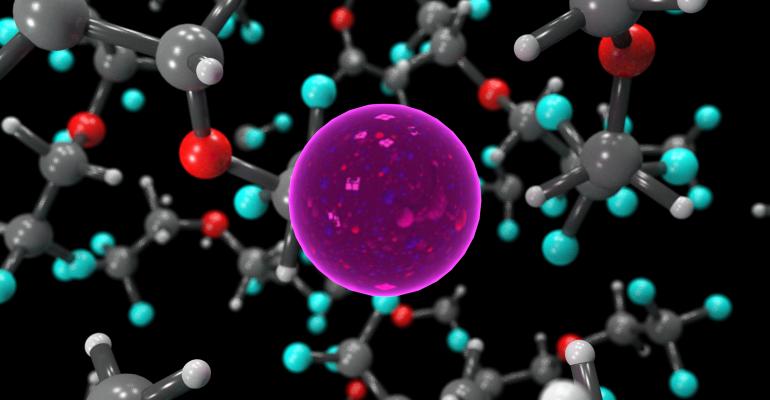 An electrolyte breakthrough allows room temperature operation of a previously high-temperature battery design that was largely discarded in the 1970s.

Although lithium ion batteries have a strong hold on the current market, other materials show some promise for future rechargeable battery development. One such material is fluoride—the negatively charged form, or anion, of the element fluorine. During the 1970s, battery researchers worked to create solid-state rechargeable fluoride batteries. Using solid components, the batteries would only operate at high temperatures, which made them impractical for everyday use. Now, a team of researchers from Caltech and the Jet Propulsion Laboratory (which is managed by Caltech for NASA)—as well as the Honda Research Institute and Lawrence Berkeley National Laboratory—have figured out how to make fluoride batteries work using liquid components at room temperature.

Challenging to Work With

Compared to commercial lithium ion battery chemistries, "Fluoride batteries can have a higher energy density, which means that they may last longer—up to eight times longer than batteries in use today," said study co-author Robert Grubbs, Caltech's Victor and Elizabeth Atkins Professor of Chemistry and a winner of the 2005 Nobel Prize in Chemistry. "But fluoride can be challenging to work with, in particular because it's so corrosive and reactive," he added in a Caltech news release.

Batteries are made up of a positive electrode (called the cathode) and a negative electrode (called the anode) that are separated by an electrolyte that allows ions to pass between the electrodes. In a lithium ion battery, positively charged lithium ions pass through the liquid electrolyte from the cathode to the anode when the battery is charged, and from the anode back to the cathode while the battery is in use during discharge. Lithium is the most electropositive element on the periodic table. It likes to lose electrons, so giving lithium electrons that it doesn’t want during charging stores energy.

The Opposite of Lithium

Fluoride is the opposite of lithium in that it is the most electronegative element—it wants to acquire electrons. So taking away electrons from fluoride also stores energy. Unlike positively charged lithium ions (cations) that travel through the electrolytes between the battery electrodes during charging and discharging of a lithium ion battery, it is negatively charged fluoride anions that transport charge in a fluoride battery.

Until now, the solid electrolytes used in fluoride batteries have required temperatures in excess of 300°F in order to allow the ionic transport. To operate at room temperature, ionic transport would need to take place in a liquid electrolyte, as with a lithium ion battery. But the corrosive and reactive nature of fluoride caused a breakdown of liquid electrolytes that had been tried. The new research uses an electrolyte liquid called bis(2,2,2-trifluoroethyl)ether, or BTFE. This liquid solvent was found to keep the fluoride ion stable, allowing it to shuttle electrons back and forth in the battery while at room temperature.

One of the researchers on the project, Brett Savoie—a Caltech postdoc who is now an assistant professor of chemical engineering at Purdue University—explained how BTFE works in a Purdue news release. “BTFE is made up of several chemical groups that are arranged to give the molecule two positively charged regions that strongly interact with fluoride, since opposites attract,” he stated in the Purdue release. “Simulations showed how these charged regions lead BTFE molecules to surround fluoride and dissolve it at room temperature,” Savoie noted. “Fluoride-based battery electrodes can store more ions per site than typical lithium ion electrodes, which means that this technology has the capability to be much more energy dense.”

Although building a room temperature fluoride battery is a breakthrough, the technology is still far from a practical energy source for laptops, cell phones, and electric cars. One problem is that the cathode and anode electrodes tend to dissolve into the BTFE electrolyte, limiting their lifetimes. The team would also like to expand the voltage and stability window of BTFE, making it less likely to fail at higher voltages. As with almost every battery breakthrough, don’t expect to see a commercialized version for at least a decade. Still, when a Nobel Prize winner predicts that a future fluoride battery could last up to eight times longer than today’s lithium ion batteries, it is worth taking note.