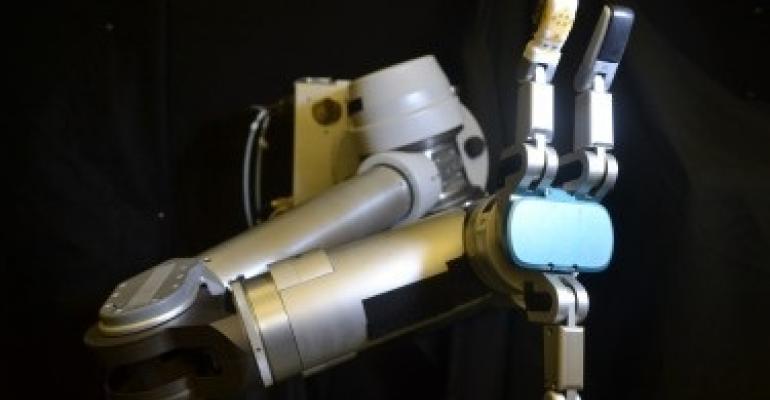 Researchers have developed a new flexible sensor “skin” that gives robots and prosthetic devices a sense of touch by allowing them to sense shear forces and vibration.

Robotics research is becoming so advanced that robots are becoming more like humans all the time. Now researchers at UCLA and the University of Washington (UW) have co-collaborated to give them something that’s intrinsic to how humans interactive with their environment—a sense of touch.

The skin—made from silicone rubber—can accurately transmit information about shear forces and vibration to a robot or prosthetic device, allowing it in a sense to “feel” objects so it can properly grasp and manipulate them, researchers said.

Robots are becoming increasingly functional for a number of human-like tasks. One in which they already have played a critical role is to disable bombs for the U.S. military in war-stricken areas such as Iraq and Afghanistan. Robots also are starting to be used as assistants in factories, households, hospitals, and restaurant kitchens, which require them to pick up and move every-day objects.

To date, sensing capability in robots’ current capacity has been limited because it has been either difficult or impossible for them to accurately sense the vibrations and shear forces that occur because they primarily rely on visual cues, Posner said.

“Most robotic hands and prosthetics don’t have any tactile sensors that can measure the forces,” he told Design News. “There are some research-level sensors available, but they are typically whole finger sensors that replace the existing robotic or prosthetic finger. Our technology is a skin that wraps around existing fingers or surfaces.”

For example, the sensor capability currently in use can’t allow a robot or device to sense when a finger is sliding along a tabletop or when an object begins to fall, critical movements when disabling a bomb or using a surgical instrument, for example.

“Bringing the sense of touch to robotic and prosthetic hands can greatly improve the manipulation of objects for a wide range of applications that are as simple as holding an egg, or pressing buttons on electronics and as complex as diffusing an incendiary device in a military application,” Posner said.

How Posner and the team were able to achieve this capability is by creating bio-inspired sensor skin that mimics the way a human finger experiences tension and compression as it slides along a surface or distinguishes among different textures, he said.

Using similar precision and sensitivity as human skin, the sensor-fused material measures this tactile information and could vastly improve the ability of robots to perform the tasks that increasingly are required of them, according to researchers. It also could improve the experience of people who need to use prosthetic limbs as they interact with their environment.

“These sensors could be used to give the sense of touch to robotic hands or used on prosthetics, such as artificial arms and hands,” he said. “Providing the sense of touch enables more precise manipulation of objects, feeling texture, and using appropriate forces when holding or interacting with objects.”

Researchers published a paper on their work in the journal Sensors and Actuators A: Physical.

UW’s Washington Nanofabrication Facility manufactured the stretchable electronic skin, which is embedded with serpentine channels about half the width of a human hair that are filled with electrically conductive liquid metal. The metal is in lieu of solid wires, which would crack or wear when the skin is stretched, according to the team.

When placed around a robot finger, the channels become strategically placed in the same position as human fingernails normally. And just as one side of a person’s nailbed bulges out while the other side becomes stretched tight under tension when he or she slides a finger across a surface, the same thing happens to the sensor skin when used on a robot or prosthetic finger.

“We leveraged this effect in our artificial skin to generate asymmetric stretching,” Posner explained. “We measure how much the skin stretches using tiny channels that filled with liquid metal, similar to mercury. When the channel geometry changes, so does the amount of electricity that can flow through them.”

The team demonstrated how the skin, when used on a robot, can perform tasks such as opening a door, interacting with a phone, shaking hands, and others with similar sensitivity and precision as human hands.

Moreover, experiments demonstrated that the skin can even do one better--detecting tiny vibrations at 800 times per second, which is better than human fingers.

The work shows great promise for improving the functionality of robotics and artificial limbs, which is the goal for researchers, Posner said. The team plans to continue its work to demonstrate how the sensors can be used to improve other applications as well, he added.