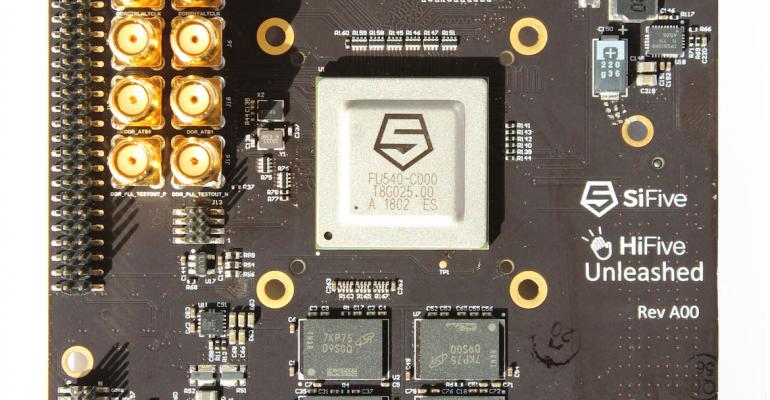 SiFive's HiFive Unleashed is a multicore SoC based on the RISC-V architecture and is aimed at bringing open-source hardware development to IoT, AI, and beyond.

Only months after debuting the Freedom U540, the world's first Linux-compatible processor based on the open-source RISC-V chip architecture, RISC-V chipmaker SiFive has surprised the open-source community again by unveiling a full development board built around the ISA.

Called the HiFive Unleashed, the new development board is built around SiFive's Freedom U540, which is based on the company's U54-MC Coreplex. The chip is a 64-bit, 4+1 multicore processor that fully supports Linux, as well as other operating systems such as FreeBSD and Unix. The development board itself features a 8GB of DDR4 with ECC, a gigabit ethernet port, 32 MB of quad SPI flash memory, a MicroSD card slot, and an FPGA mezzanine card (FMC) connector for allowing peripherals and other expansion devices to be attached to the board.

“This is a really major milestone that I think is going to take away the doubts that naysayers have,”  Jack Kang, VP of Product and Business Development at SiFive told Design News. "Before, people could point to [RISC-V] and say, 'It's just a project; it's only for low-performance stuff; it's just for microcontrollers ... .' The big promise of RISC-V as a free and open ISA is we have a chance to have an ISA that can be a standard that is used in all levels of computing.”

With the HiFive Unleashed, SiFive is looking to prove that open-source hardware can handle any emerging technology task. from smart IoT devices to networking and even machine learning and artificial intelligence. across a variety of commercial industries. “Commercially. it opens up the market and the number of places that RISC-V can serve and removes a lot of questions as to whether can scale up,” Kang said.

Kang said SiFive hopes that having a development board available will rally the open source engineering community. “We're having it available to help the open-source software community develop not just for Linux but other distributions of Linux, other operating systems, drivers, kernels, what have you for the RISC-V ecosystem. Because now there's a chip that's available, and nothing beats actual hardware for software development.”

But how does SiFive expect an open-source board to stand out in an ever-crowding market? And why should a company, particularly in a space like IoT, choose open source over any of the other solutions available? “ I certainly believe IoT will be solved by having lots of customization,” Kang said. “I believe IoT inherently is not a one-size-fits-all type of market. What that means is you're not going to be able to have one killer chip that does everything. What you're going to need is to be able to customize or get your partners to customize the silicon to meet the specific problems that will come up. And I will argue that RISC-V is great for customization.”

He also stressed the value of having a community of open-source developers available around the HiFive, something other, locked-in development boards don't have. “Because RISC-V is the base ISA and the base standard it means you get the benefit of the entire software ecosystem that's going to be developed,” Kang said. “You're going to have a base Linux port, for example, and a lot of base software that's all going to run on RISC-V. So everybody has that starting point and common base, but because RISC-V is expandable, because it's open and people can see inside, there's going to be lots of room and it'll be much easier to customize at the CPU level, at the instruction level, at the SoC level, and so on. I think the ability to do those customizations quickly and cheaply is what's going to enable a market like IoT.”

Having this community available also affords RISC-V other advantages – like security, according to Kang . No chipmaker today, especially a young company, can talk about processors without addressing the 400-pound gorilla in the room – the widespread Meltdown and Spectre hardware bugs. SiFive said all of its current products and intellectual property are not affected by either bug and credits this to the open nature of the chip hardware.

“What's important about RISC-V being open is that it means we get the world's experts on security all looking at the ISA specification,” Kang said. “Security is a very, very difficult area so we have an opportunity with RISC-V in that it's being designed from the ground up at a time when security is an absolute must.”

Going forward, Kang said the RISC-V community is going to be challenged to bring out the best of its engineering talent to design the most secure systems possible. “Because [RISC-V is] fundamentally open, there's also room for a lot more inspection and for people to see inside and ensure security. Security by obscurity is a fool's security. You need to be secure and open,” Kang said.

And what about the maker community? SiFive previously release an Arduino-compatible board, the HiFive1, with a RISC-V core, but Kang is optimistic that SiFive can put something as powerful as the HiFive Unleashed in the hands of DIY developers and hobbyists in the very near future.

"The reason boards like the Raspberry Pi are great for the community is they are low cost. And they are low cost because they have a lot of commercial product behind them,” he said. “As RISC-V's commercial success takes off it will help drive costs down. I think if you look at the track record of RISC-V I think maybe we're a year to a year-and-a-half away from getting it to the maker and hacker level.”

At the opposite end of the spectrum, SiFive believes RISC-V will soon be ready to stake its claim in the world of emerging technologies that require high-powered processing as well. With companies like Nvidia and Google releasing processors aimed directly at AI and machine learning applications such as autonomous driving, will we be seeing an open-source option enter the battle over AI processors?

“There are certainly companies looking at RISC-V in vectors in the [AI] space,” Kang said. “One of the things that's happening with RISC-V is there is a vector extension that's coming that will be announced in May 2018. It's a form of customization being developed for RISC-V because it's going to be exceedingly useful for AI , machine learning and neural network processing.”

SiFive will be releasing a limited batch of HiFive Unleashed boards in March 2018 as part of a early access program, with a wider release planned for June. The company will also be hosting a series of hackathons beginning in March that will allow developers to get hands-on experience with the board.

For Kang all that's left for the HiFive Unleashed is really as simple as getting the boards into developers hands and seeing what they can create. “To those companies that are looking at it right now, we're at the stage where we've hit critical mass and things are happening. The next phase is about how do we branch out and commercialize into these products.”