Everything You Need to Know about LoRa and the IoT 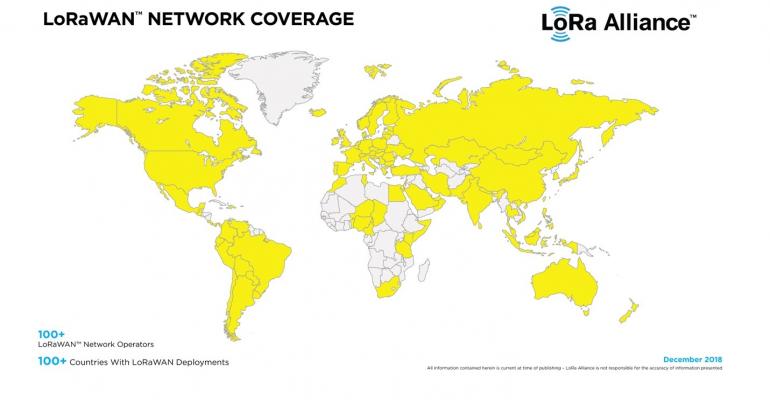 A guide to LoRa / LoRAWAN, the communications technology emerging as the leader among Low-Power Wide-Area Networks (LPWANs) entering the IoT space.

We're entering a world in which WiFi and Bluetooth may no longer be the best communication technologies for Internet of Things (IoT) applications. The IoT is gaining more ground each year. Experts project there will be 75 billion connected devices by 2025.

To support this incredible demand for bandwidth, new players have entered the IoT arena. For many industries, including supply chain, agriculture, healthcare, energy, and urban planning, Low-Power Wide-Area Networks (LPWANs) are a much better fit.

What Are Low-Power Wide-Area Networks (LPWANs)?

There are two reasons LoRaWAN has the attention of the market: First, it is currently the strongest technology available for LPWAN applications. Second, it is widely available, with more than 100 operators in over 100 countries.

One of the most popular new IoT communication technologies is LoRa (short for “Long Range”), which runs on top of the LoRaWAN network protocol (more on this in a bit).

LoRa is a radio modulation technique. Semtech, a major provider of LoRa devices and services, says the technique is based on chirp spread spectrum technology (CSS). Beyond that, the company keeps its lips sealed on exactly how the physical layer specification comes together. What we do know is this technique is responsible for the impressive communication distance achieved by the platform (the world record is 436 miles). According to Semtech, a single LoRa base station can connect to sensors more than 15-30 miles away in rural areas.

Donna Moore, CEO and Chairwoman of the LoRa Alliance, a non-profit association devoted to enabling large scale deployment of LPWANs, said, “LoRaWAN is ideally suited for long range, low power, low data bandwidth transmissions where small amounts of data need to either travel far, or are in hard to reach locations like underground, in concrete, or in dense urban environments.” Moore told Design News via email that the reason LoRaWAN is being deployed in such a wide variety of verticals, including cities, industrial, agriculture, logistics, and utilities is because of “its flexibility, demonstrated performance, and its firmware over-the-air update capability.”

LoRa is proprietary. Companies looking to use the technology must purchase LoRa-capable chips that will enable devices to connect to the LoRaWAN network. This could make it prohibitive to enter the market from a large-scale manufacturing standpoint. If you need LoRa connectivity chips, you’ll have to go through Semtech or one of its authorized partners or licensees. The LoRa Alliance currently counts over 500 companies in its membership, and Moore said that this extensive member ecosystem gives businesses a diverse set of solutions to choose from. The LoRa Alliance also offers a certification program to ensure device interoperability among its members' solutions.

LoRaWAN is Not LoRA

It's important to understand that LoRaWAN and LoRa are not synonymous. LoRaWAN is the media access control (MAC) layer protocol on top of the physical layer that defines the communication protocol and system architecture for a device. It is, in short, the network upon which all LoRa devices operate.

The LoRaWAN link-layer spec is the same across all regions. Each region may, however, differ in the attributes of the physical layer of the device. These connected devices are not gateway-specific. Instead, consumers can grab any certified LoRaWAN device and trust it will perform necessary tasks like filtering out redundant messages and maintaining low power consumption. LoRaWAN, of course, works with LoRa technology, but leverages the LoRa Alliance member ecosystem to provide a wide range of supplier options, from chips to the cloud. There are also many LoRaWAN devices already on the market and ready to work with the cloud.

LoRaWAN may currently be the most popular LPWAN technology. That said, it is important to note it isn’t the only technology on the market.

NarrowBand Internet of Things (NB-IoT) is a cellular-grade technology that supports more complex cellular functions. This advanced functionality comes at the expense of low-power consumption. It is not as strong with roving technologies as LoRaWAN, but because it relies on the 4G network, it is predicted to become widely available once the infrastructure becomes widespread.

SigFox is another player on the IoT communications field. It was the first company to create an LPWAN on a low-bandwidth network. The technology is not widely deployed, but could be used for research purposes for its low-cost radio modules and end-to-end modules. Additionally, SigFox is a proprietary network, much like the cellular carrier model, where users have to pay SigFox for access. This is in sharp contrast to the open LoRaWAN model, where anyone can set up a network for public or private use.

Helium is a newer player on the field worth mentioning. It is a startup developing its own open-source LPWAN similar to the LoRaWAN standard to enable free access to the low-power network. Its gateway is already available for purchase and the company has worked directly with businesses to create things like smart pet collars, smart apartments, and IoT-enabled agriculture farms.

The communication range achieved by LoRa technology is impressive, no doubt. The ability to send small packets of information more than 400 miles using a single gateway is rivaled by no competing technology. That said, it isn’t a great fit for all technologies, due to either the limits of the technology or chip costs for startups. For short range connectivity, technologies like Bluetooth, ZigBee and WiFi may be the best option.

There's also the accelerating deployment of 5G to consider. Many engineers will be wondering how 5G will play into the IoT communications ecosystem as well. “From our perspective, 5G and LoRaWAN are fundamentally suited to different applications,” the LoRa Alliance's Moore said. “5G will be needed for high bandwidth, low latency applications, such as emergency service, connected cars, and entertainment. However, for wireless connectivity with long battery life, small data bytes, long distance, and deep penetration through concrete and steel, only LoRaWAN can accommodate these applications, which represent about 75% of IoT use cases.”

Moore also added that LoRaWAN doesn't come with some of the challenges around 5G. “LoRaWAN is actively being deployed across a wide range of' smart applications, and there will be no compelling reason to migrate those applications to 5G when it becomes broadly available in the future,” she said. “Additionally, in areas where densification is a challenge, like smart cities, or where cellular isn’t available, like farms, LoRaWAN is highly desirable as it can accommodate those requirements indefinitely. Finally, LoRaWAN offers a variety of deployment options, notably public or private networks, which offers flexibility that isn’t expected to be available with 5G.”

Are you interested in implementing LoRa / LoRaWAN into your next project? Check out our guide to The 7 Best LoRaWAN Devices on the Market.

Cabe Atwell is an electrical engineer, machinist, writer and maker. Aside from his writing at Design News , you can find his work at EETimes, EDN, Make Magazine , Hackster, SolidSmack, and dozens of other publications. Beyond writing, he also builds projects, designs tutorials, and writes books. His forthcoming book for aspiring engineers is, “ The Troublemaker's Handbook: A Compendium of Tricks and Hacks Using LEDs, Transistors, and Integrated Circuits."