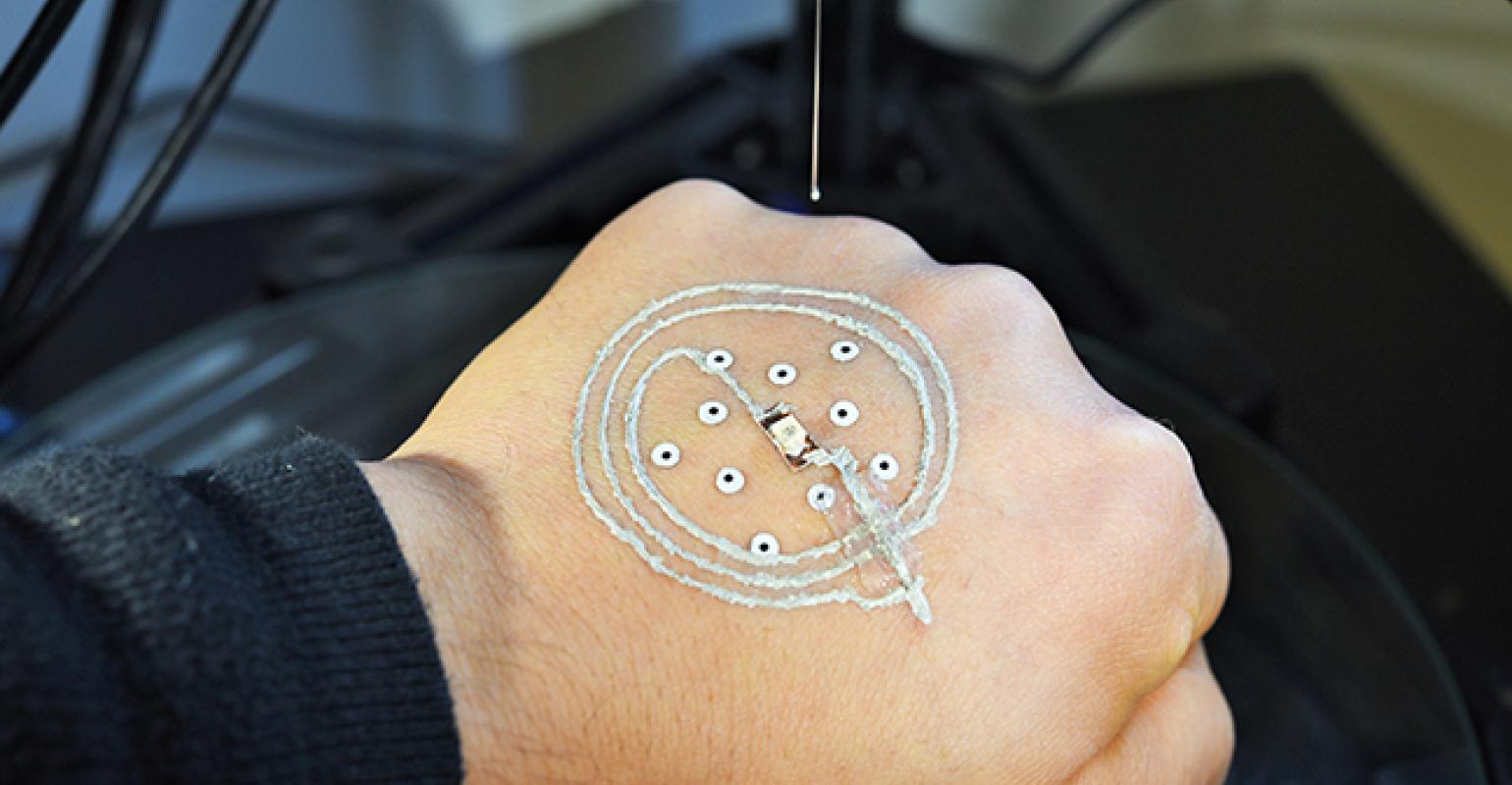 This technique could be used as a next-generation battlefield tool or source of electricity by soldiers to replace equipment that now weighs them down.

Researchers have successfully 3D-printed electronics directly onto human skin using a technique that paves the way for novel applications—not only in wearable electronic technology but also in medicine.

A team from the University of Minnesota printed electronics on a person’s hand for the first time using a portable, low-cost printer that they customized for this purpose, they said.

The combination of the printer and the technique could be used as a next-generation battlefield tool or source of electricity by soldiers to replace equipment they use now that weighs them down, researchers said. For example, one application for the invention is to allow soldiers to print temporary sensors on their bodies to help them detect chemical or biological agents, said Michael McAlpine, the study’s lead author and an associate professor of mechanical engineering at the university.

Another could be 3D-printed solar cells on the skin that could be used to charge electronics, replacing the heavy batteries that soldiers typically must haul with them, he said. “It would be like a ‘Swiss Army knife’ of the future, with everything they need all in one portable 3D-printing tool,” McAlpine said of the printed electronics.

Several aspects of the printing technique developed by the team are integral to its novel function, McAlpine noted. One is that the printer can adjust to small movements of the body during printing by using computer vision.

To print the electronics, researchers place temporary markers on the skin and then scan them. During printing, the printer then uses computer vision to adjust to movements in real time, McAlpine said. “No matter how hard anyone would try to stay still when using the printer on the skin, a person moves slightly and every hand is different,” he said. “This printer can track the hand using the markers and adjust in real-time to the movements and contours of the hand, so printing of the electronics keeps its circuit shape.”

The technique also uses a special type of ink comprising silver flakes that can cure and conduct at room temperature—a characteristic essential to using it on human skin, researchers said. Typical 3D-printing inks need to cure at high temperatures—up to 100 degrees Celsius or 212 degrees Fahrenheit, which obviously would burn someone’s skin.

Once the electronics are printed, they also are easy to remove, McAlpine said. Someone can just peel it off the skin with tweezers or wash it off with water once he or she is finished using it.

The University of Minnesota team is not the first to experiment with printing electronics directly on the skin. In similar work, Japanese researchers developed electronic device tattoos using ultrathin, nanosheet film that can be stuck onto human skin, paving the way for new types of wearable electronics.

Printing electronics on the skin is not the University of Minnesota team’s only achievement, however. They also successfully printed a bio-ink made of biological cells on the skin wound of a mouse—a technique that could lead to new medical treatments for wound healing and direct printing of grafts for skin disorders, McAlpine said.

“I’m fascinated by the idea of printing electronics or cells directly on the skin,” McAlpine stated. “It is such a simple idea and has unlimited potential for important applications in the future.”

Elizabeth Montalbano is a freelance writer who has written about technology and culture for 20 years. She has lived and worked as a professional journalist in Phoenix, San Francisco, and New York City. She currently resides in a village on the southwest coast of Portugal.