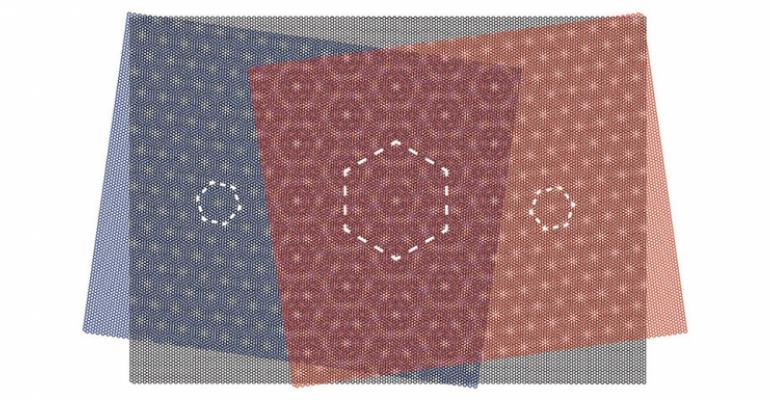 Researchers in Switzerland have developed a new material arrangement for graphene that can potentially boost its electrical conductivity, properties.

The material graphene already is well known for being versatile for various uses due to its small size, light weight, and high electrical conductivity. The carbon-based nanomaterial already is being used in various applications, including electronics, 3D printing, and the development of new materials.

Now researchers at the University of Basel in Switzerland have found a potential way to improve graphene’s electrical properties by combining an atomically thin graphene and a boron nitride layer at a slightly rotated angle.

This arrangement demonstrates for the first time that adding a third layer to the material combination—basically developing a three-layer sandwich of carbon and boron nitride—significantly increases the number of potential synthetic materials. These materials can be used to change or artificially produce new electronic material properties, said Andreas Baumgartner, a senior scientist at the university and head of the Swiss Nanoscience Institute’s PhD school.

“To put it simply, the atomic patterns determine the behavior of electrons in a material, and we are combining different naturally occurring patterns to create new synthetic materials,” Baumgartner, the project’s supervisor, said in a university news release. “Now we have discovered effects in these tailor-made electronic devices that are consistent with a three-layer superstructure.”

The research builds on the work U.S. researchers revealed last year, in which they showed that by rotating two stacked graphene layers by an angle of 1.1 degrees, graphene became a superconductor. This example already demonstrated how a combination of atomically thin materials can produce completely new electrical properties.

Now the Swiss team—comprised of researchers at the University of Basel’s Swiss Nanoscience Institute and the Department of Physics and led by Professor Christian Schönenberger—has gone a step further by placing a layer of graphene between two boron-nitride layers. Boron nitride is typically used to protect the sensitive carbon structure.

In doing so, researchers aligned the layers very precisely with the crystal lattice of the graphene, they said. The effect is commonly known as a moiré pattern—when two regular patterns are superimposed, a new pattern results with a larger periodic lattice, said Lujun Wang, a member of the SNI PhD School and researcher in Schönenberger’s team.

This superlattice effect—in which the atoms are arranged hexagonally in all layers—can create larger, regular patterns if the patterns are stacked on top of each other, with a size depending on the angle between the layers, researchers said. Scientists already had shown this effect with a two-layer combination of graphene and boron nitride; what’s new in the Swiss team’s research is the effects of adding a second boron nitride layer, which had not yet been found, according to the team. Researchers published a paper on their work in the journal Nano Letters.

Specifically, when the physicists from Basel experimented with three layers, two superlattices were formed between the graphene and the upper and the lower boron nitride layer, respectively. This created an even larger superstructure than possible with only one layer, making the possibilities for new material applications—and thus the expansion of electrical properties of graphene—even broader than in previous research, scientists said.