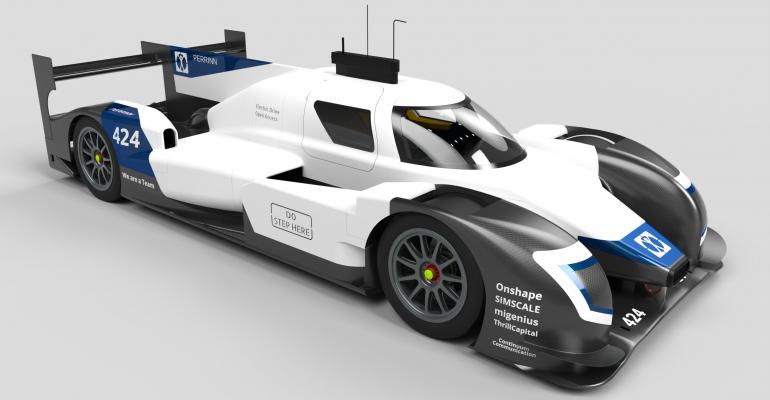 A former Formula One engineer has a new way to develop electric racing cars including the use of cloud computing.

Motorsports is changing. The electrification of racing is becoming a reality with the success of the Formula E worldwide electric racing series, Volkswagen’s stunning victory with an electric racer at the Pikes Peak International Hill Climb, and an announcement that electric cars will be competing for the World Rallycross Championship in 2020.

In 2024, the Le Mans 24 hour race in France will introduce a racing class for electric vehicles powered by hydrogen fuel cells. Companies like BMW and Audi have already expressed interest. The push to electric racing cars has some wondering what opportunities electrification might present. One such person is Nic Perrin.

“Project 424 is about going to Le Mans 24 hours with an electric car,” said Perrin, a Formula One track engineer and aerodynamicist who founded the project. “It started a while ago, when I left Formula One to start a project with a Le Mans prototype (LMP1) which, at the time, was a petrol-hybrid engine. The LMP1 we couldn’t sell because the market conditions were difficult,” Perrin told Design News.

“The development of the electric drivetrain made sense—shifting our attention to electric in order to lead the way by going to Le Mans with an electric car. That’s the focus, Le Mans 24 hours,” he said. The project name simply enough comes from “a project for (4) the Le mans 24 hour (24)”—Project 424.

“It is based upon the LMP1 that we developed. Basically, we took the LMP1 and converted it to electric. We designed it to integrate the electric drivetrain,” said Perrin. “We looked around and, basically, what makes the most sense is to use the Formula E motors and inverters that we can get off-the-shelf from a number of companies.”

“We are going to use two motors at the rear, and one motor at the front. The motors are 250 kilowatts each,” he said. “The batteries are going to be off-the-shelf prismatic (lithium ion) cells that we are integrating ourselves into our own module system design. Then the modules are integrated into the main composite chassis of the car. All the integration is done by us.”

Perrin chose the prismatic cells over cylindrical cells based upon his experience in other projects. “I have experience with prismatic cells on a previous project that I have done, and that was successful. It looks like prismatic is used in motorsport more than cylindrical. In my view, they are easier to integrate into the sort of modules that we are building for racing cars. We’ll have nine modules, and they will be bolted directly onto the floor part of the structure, which is them bolted onto the chassis,” he said.

With 2024 and Le Mans a long way into the future, Perrin has come up with a way to gain experience and publicity for Project 424. “The project is in two phases. The first is not about going to Le Mans with the car—it’s about running that car as fast as we can for a short period of time to beat electric car records around Formula One tracks,” he told us. “This will be a showcase of the performance of the car, which will be in line with the current LMP1 petrol (racers). That will be the first stage, and it will be important to us because we can show that we can be as fast as petrol-hybrid cars. The second stage will be to go to Le Mans, but that will not be before 2024, when new rules are coming into place for electric cars. At this stage, the energy storage will have evolved—it will be either battery or hydrogen fuel cells,” he said.

Although hydrogen fuel cells may be in the car’s future, there are no development plans for that technology at present. “We are staying on battery right now and it (success at Le Mans) will depend on how fast we can recharge the battery. Effectively, the batteries will always be incorporated into the car. We don’t have a plan for and we will not do interchangeable batteries which, for me, is not the right way to go. It is not a good solution for racing, anyway,” he said.

What about some of the techniques used on electric road cars to conserve energy? “Really, the problem of energy consumption in racing races doesn’t go hand-in-hand. You are trying to go as fast as possible and you are going to use a lot of energy. We are developing the car for speed,” he said.

What about regenerative braking? “We will use regenerative braking, but first of all (in racing), regenerative under braking is not significant. The energy you get back is probably around 5% of what you use in a lap. Braking zones (on a racetrack) are so short compared to straights. For lap records, we might not use regenerative (braking) at all because it unsettles the car a little bit and for gaining 5% energy, it’s not worth it. At Le Mans, yes, we will use it. But at 5%, you will not solve the energy issue and we need to find a way to recharge the battery quick enough,” said Perrin.

Aerodynamics is obviously a key part of the racing car project. “Optimization of drag and downforce in a race car is something that you always do. The LMP1 that we are basing this car on has gone through a very extensive aerodynamic test program in CFD (computational fluid dynamics)—it’s something that you have to do to make sure that the car performance will be as high as it can. So the optimization process of drag and downforce has been done. Again, we have performance in mind, so we will not degrade the performance of the car for the range of the car. The main aim is performance and speed around one lap and for this, you have to decouple the energy problem with the aerodynamic problem. What you do is build the car with the aerodynamics that are required for it to be as fast as possible. I expect it will have more drag than you would want for energy consumption, but that’s what you do. Having said that, we are putting a DRS (Drag Reduction System) on the car to reduce the drag in a straight line and which is something that we think will be allowed at Le Mans. It is interesting to have a system like this, just to gain a bit more performance,” Perrin told us.

The Project 424 team is using cloud-based computing systems for most of the heavy lifting when it comes to engineering. “We use SimScale for stress analyses of structures to make sure that the car is strong enough in areas that matter,” he said. Aerodynamic studies have also used the online simulation service. “For CFD, the big value of SimScale is their infrastructure—the interface that they have developed around AWS (Amazon Web Services) for cloud computing. That’s really interesting for us. The car requires a very complex CFD software to develop it. From my Formula One experience, correlation can be a problem if you are not using a software of the correct specification. On the CFD side, we have been running using a Formula One grade software (OpenFoam) and correlation is good. What we are doing with SimScale is implementing that level of software on that platform.”

Although Project 424 could be considered a motorsports engineering exercise, Perrin looks at it as being much more. “The main innovation of the project is not on the technical side, but it’s on the way we will integrate partners into the project and work with them to develop the car,” he said. “Project 424 is a project on the Internet. For the first time, a world-class project of this nature in motorsport is going to be done entirely on the Internet. This is why we are so happy to partner with people like SimScale (in Germany), Onshape (in the US), Migenius (in Australia), and other companies we partner with. We want to be completely part of the digital transformation—we want to use exclusively cloud computing and cloud platforms. The reason is to be able to very quickly integrate partners into the project—to integrate collaborators so there is no need to be in one place. Anybody can work on this from anywhere,” said Perrin.

“It’s a completely new model. There is no headquarters. There is no one building. It’s happening on the Internet and using our partners' infrastructures,” Perrin told us.

Jon Hirschtick, CEO and co-founder, Onshape—a company specializing in cloud-based computer aided design (CAD)—said in a Project 424 press release, "Perrin’s vision to bring teams together around open access design data is truly disruptive for the motorsport industry. We believe this is how globally distributed teams will work from now on, with access to up-to-date CAD data no longer being a barrier when using Onshape.”

Even with all of the high-power engineering and computing, the initial goals of the project are fairly modest. “It’s not going to be possible just right now to beat petrol records—we won’t beat Formula One cars,” said Perrin. “With an electric drivetrain, the car is a bit heavier with the same power. But, having said that, people from the electric industry know that development of electric drivetrains will do what’s possible in petrol cars, eventually. There will come a point where electric cars will beat all records.”

How soon Project 424 will hit the track is a bit problematic and will depend upon the team’s ability to find sponsors. “From the moment the budget is in place, we need six months to put the car on track and start beating some records,” said Perrin. Motorsports sponsorship can be elusive and, with the goal of racing at Le Mans more than five years out, the search becomes even more difficult. Still, Project 424 could demonstrate what can be done by a small team working as part of the digital transformation. Potential sponsors could look at the experiences and insights gained by the team from working in the cloud as even more valuable than what will be gained by competing at Le Mans in 2024.