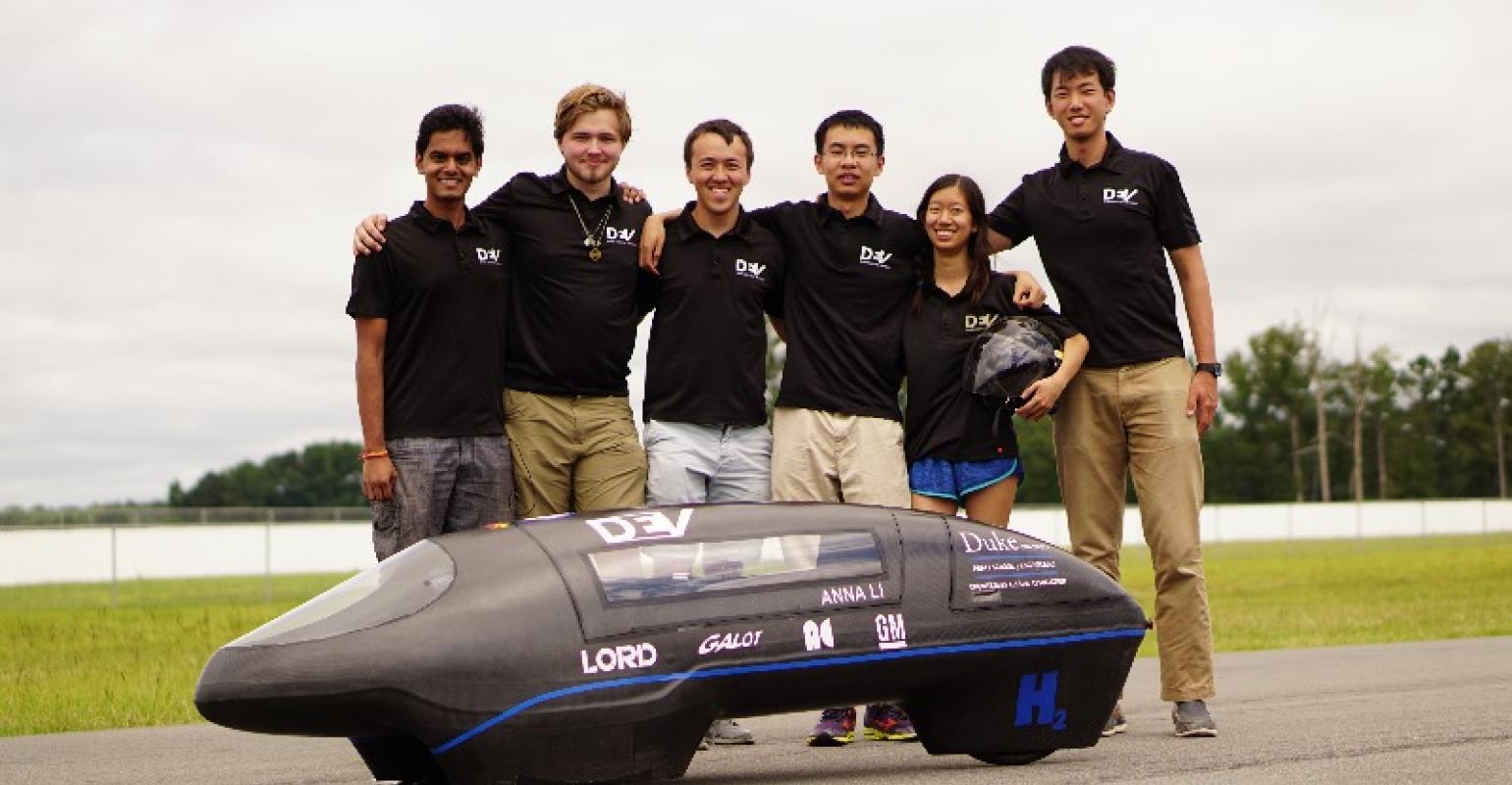 Duke Students Engineer a Record 14,573 Miles Per Gallon From a Fuel-Cell Powered Vehicle

Duke University has set a record for fuel efficiency with a hydrogen fuel-cell powered vehicle. The team, from the university’s Pratt School of Engineering, set a record with equivalent energy usage of 14,573 miles per gallon. It bested the previous mark of 12,600 miles per gallon, which was set by a team from ETH Zurich and stood for 13 years. Guinness World Records has confirmed the record by the Duke University team.

“Everything was done by the students," Nico Hotz, assistant professor in the Mechanical Engineering and Materials Science department, told Design News. “Five to seven years ago, some students in Duke Engineering decided to participate in the Shell Eco-marathon. Initially, they competed in the category that uses a battery powered vehicle. Because it worked so well, some students within the team decided that they wanted to try something different. This past year, the students decided to compete in two categories—continue with the battery vehicle, but also try to build a vehicle with a fuel cell powered by hydrogen,” said Hotz, who acted as the student’s advisor on the project. He added, “They worked for ten months—I was surprised that they could get it done so quickly!”

In April of this year in Sonoma, California, the Duke Engineering team won the Shell Eco-marathon competition in the battery vehicle category as well as the category for fuel cell vehicles. “The fuel cell version was so good that the students realized, when calculating the efficiency at miles per gallon equivalent, that it was very close to the world record,” noted Hotz. “After the semester was over, some students stayed here (at Duke) over the summer, worked on the fuel cell vehicle, and improved it. And in test runs, they realized that they were several percent better than the world record (as recognized by Guinness),” said Hotz.

A record attempt was set up with the necessary observers and run under the required conditions, measuring total hydrogen consumption, total distance traveled, and total time of the run while ensuring the car traveled at a minimum average speed of 15 mph. The efficiency was computed based on the total distance traveled, divided by the total hydrogen consumed. To set the world record, the vehicle traveled eight-and-a-half miles on a racetrack and used a total of less than one gram of hydrogen. “To put that in perspective,” said team member and 2018 electrical engineering graduate, Patrick Grady, in a Duke University news release, “our vehicle is capable of driving to any point on the globe using the energy in one gallon of gas.”

The design of the vehicle, named “Maxwell” in honor of James Clerk Maxwell’s electromagnetism equations from the 1860s, supplemented the hydrogen fuel cell with a bank of supercapacitors that could provide the driver with a short burst of acceleration when needed. This allowed the fuel cell to be much smaller, reducing overall energy consumption.

“In engineering, we always have a challenge when we teach students because it takes quite a while until they can actually apply their knowledge to real projects, to real systems, and to machines and devices. You need a lot of physics and chemistry and math, and it takes a couple years to get there,” noted Hotz. “This whole Duke electric vehicle team is an amazing opportunity, where students of any year can work on a real system—hands-on and applied—and make something work. And in this case, they made it work really, really well!”