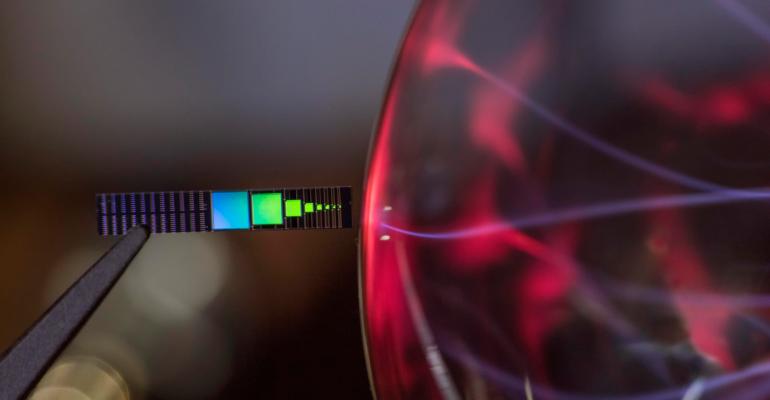 Researchers have developed a small silicon-based device that can turn waste heat dissipated by electronics into a power source.

Converting heat that dissipates from electronic devices into usable power is a Holy Grail of sorts for energy-harvesting designers. After all, it would allow these devices—even electric cars—to be their own sources of power. Now, researchers at the Department of Energy’s (DOE’s) Sandia National Laboratories appear to be closer to reaching this goal with the development of a tiny silicon-based device that can turn so-called waste heat into DC power.

The device—smaller than the nail of a pinky finger at 1/8 inch by 1/8 inch—comprises common and abundant materials, such as aluminum, silicon, and silicon dioxide or glass. They are combined in very uncommon ways, noted Paul Davids, a physicist at the lab and the principal investigator for the study, in a Sandia press release.

Key to the device’s functionality is the top, which is made of aluminum and etched with stripes about 20 times smaller than the width of a human hair. They serve as an antenna to catch the infrared radiation, Davids said. Eventually, such a device could be used to turn something like an automobile—the engine of which gives off significant amounts of heat—into a self-sustaining energy source.

“Car engines produce a lot of heat and that heat is just waste, right?” Davids said. “So imagine if you could convert that engine heat into electrical power for a hybrid car. This is the first step in that direction, but much more work needs to be done.” Researchers published a paper on their work in the journal Physical Review Applied.

The team calls its device an infrared “rectenna,” short for “rectifying antenna.” The device is solid state—it has no moving parts that could jam, bend, or break. Nor does it ever directly touch the heat source, which could cause thermal stress.

Between the aluminum top and the silicon bottom of the rectenna is a very thin layer of silicon dioxide about 20 silicon atoms thick, or 16,000 times thinner than a human hair. This aluminum antenna—on which a pattern is etched—takes the infrared radiation it catches and channels it into this thin layer, Davids said.

Once trapped in the silicon dioxide, the radiation creates very fast electrical oscillations—about 50 trillion times a second, which pushes electrons back and forth between the aluminum and the silicon in an asymmetric manner. This process is called rectification, he said, and it’s what generates net DC electrical current.

Researchers fabricated the devices at Sandia’s Microsystems Engineering, Science and Applications Complex. The team already received a patent for the infrared rectenna and has filed several additional patents for technology related to it.

Though the development of the device wasn’t without its challenges, researchers said the process for manufacturing the rectenna is scalable because it uses common materials and the same processes already used by the integrated circuit industry. DOE researchers plan to continue their work to improve the device, including to change the pattern on the aluminum top layer of the rectenna—2D X’s instead of 1D stripes, so as to absorb infrared light over all polarizations, they said.

They aim to redesign the rectifying layer to be a full-wave rectifier instead of the current half-wave rectifier as well. By making the infrared rectenna on a thinner silicon wafer, they also can minimize power loss due to resistance.

With an improved design and greater conversion efficiency, researchers believe the power output per unit area of the device will increase. This means that within five years, the infrared rectenna may be a good alternative to RTGs for compact power supplies, Davids said.

“We’ve been whittling away at the problem, and now we’re beginning to get to the point where we’re seeing relatively large gains in power conversion. I think that there’s a path forward as an alternative to thermoelectrics,” he said. “It feels good to get to this point. It would be great if we could scale it up and change the world.”