For CTRL Labs the Future Is All in the Wrist 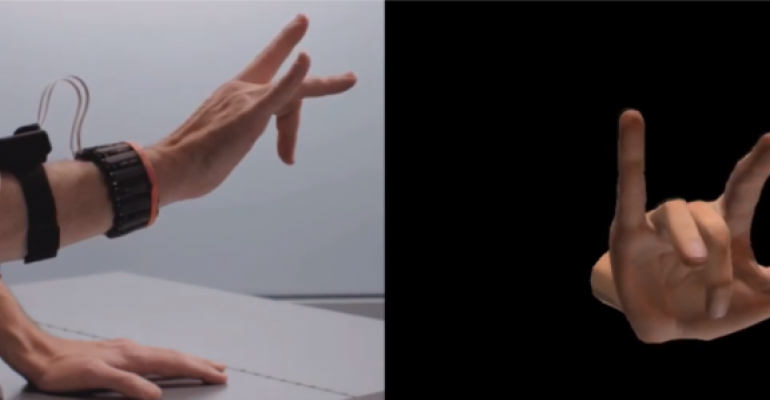 <p><strong>Mind-Controlled Electronics </strong></p><p>Why use your hands when you can use your mind? More and more advances in brain-computer interfaces are taking thought-controlled devices outside of the realm of science fiction. In 2015 DARPA researchers were able give a <a href="https://www.designnews.com/automation-motion-control/paralyzed-woman-controls-fighter-jet-simulator-her-mind/43940812445743" target="_blank">quadriplegic woman</a> neural implants that allowed her to control a flight simulator with her mind.</p><p>Companies like <a href="https://www.designnews.com/electronics-test/neurable-wants-let-you-control-any-device-your-mind/46156199157357" target="_blank">Neurable</a> and <a href="https://www.designnews.com/electronics-test/ctrl-labs-future-all-wrist/143672580460825" target="_blank">CTRL Labs</a> (shown) have been developing novel technologies to allow consumers to interact with and control electronic devices using external sensors – eliminating the need for the type of surgery that would lead to a great superhero origin story.</p><p>And if you think no one is serious about this technology, consider that CTRL Labs was purchased by Facebook to the tune $1 billion.</p><p><em>(Image source: CTRL Labs)</em></p>
CTRL Labs is developing a wrist-worn device that will allow you to control any device your mind.

What if you could walk around all day wearing a wristband that allowed you to control all of devices around you with simple hand and finger gestures, or even with your mind?

The problem with humans today, according to CTRL Labs' Dan Wetmore, is “our output systems are much more limited than our input systems.” We live in a world full of touchscreens, mice, and keyboards, not to mention voice command – all fast, efficient ways of controlling the machines around us...and all limited by our human physiology.

“The only way we interact with the world is through our motor system – whether that's shaking hands, speaking...typing,” Wetmore, Director of Clinical & Research Partnership at CTRL Labs, told an audience during his talk at the 2019 Embedded Systems Conference in Boston. “But we're limited in how quickly we can speak and type. Human output is constrained by slow, mechanical movement and sensor devices.”

New York-based CTRL Labs is looking to overcome those limitations by going straight after the motor nervous system. The company has developed a wearable electromyography (EMG) device in a wrist-worn form factor that reads singles from the nerves in the wrist and forarm that control hand movements. These signals can be transformed into control actions on an electronic device significantly faster than any tactile input.

But CTRL Labs isn't out to just replace your mouse or keyboard. The company is imagining a world were completely new control schemes are created and even machines themselves transform because of it.

“Going direct to neural data removes constraints and creates opportunities for new, unimagined control,” Wetmore told the audience. “There's no reason you can't have control over an eight-limbed, octopus-like robot, for example. Our motor system has already adapted to work with machines that are different than ourselves. Think of a musical instrument, for instance.”

To achieve this effect, the CTRL Labs team trained machine learning models to map EMG data to specific hand and finger movements. Since the model is capable of learning over time it can create a personalized control based on the wearer and also achieve near zero latency from input to feedback, according to Wetmore.

The wearer is not even required to physically move their hand or wrist. Since the device reads from the motor neuron only an imperceptible twitch, something closer to just a thought, is required. “You can hold your hand firm, but still activate muscles to extend fingers,” Wetmore explained. “It's not just your movements – it's your intentions...decoding signals from the muscles in the forearm allows for inference of what's happening with joints of the hand.”

This level of specificity also allows for a novel twist on the idea of multitasking and a potential move away from the world of “hands-full control,” we currently live in, Wetmore added. When we think of tasks like typing or controlling a video game, for example, we assume our hands are occupied with that one task. However, since CTRL Labs' device focuses on specific neurons, it can allow users to occupy control tasks while also doing other things. A video from Wetmore further demonstrated this when a player was able to hold other objects, fold his arms, and even write will still controlling a character on a video game.

Building on top of the sensor system opens up even more applications. Adding an inertial measurement unit (IMU) to the device allows it to also read the force, speed, and power of a gesture. In a demonstration video Wetmore showed to the ESC audience a researcher wearing the device was able to move a virtual block on a screen different distances depending on how forcefully he moved his hands and fingers.

A number of companies have been looking into applications of brain-computer (BCI) or brain-machine interfaces for a variety of use cases ranging from virtual reality entertainment to even medical care. Medical researchers have been actively developing mind-controlled prosthetics for disabled patients. And companies like Boston-based Neurable are examining applications for thought-controlled gaming. OpenBCI sells an open-source electroencephalogram (EEG)  headset targeted at members of the DIY and Maker community looking to develop their own BCI applications.

Wetmore said what differentiates CTRL Labs from many other companies is that it opts for EMG-based control rather than EEG. “Commercial brain-computer interfaces focus on brain itself, and can include invasive implants as well,” he said, adding that even a non-invasive EEG headset can be cumbersome and impractical at times. “By going after the motor system, we think there is more opportunity. There is more information to get scalably, non-invasively, and affordably... The human hand is one of the finest control structures in the universe, and the nerves that control the hand are largely in the forearm.”

The research CTRL Labs is conducting is based off of work that was done as early as the 1960s, when studies found it was possible to train people to voluntary control a single motor unit in their spinal cord using audio or visual feedback.

CTRL Lab's device is still in its development stages, but the company is currently accepting applications for its early access developer program. Wetmore said the company is aiming to be a core technology builder and to license its technology to partners in any number of fields.

He noted the company has a particular interest in medical applications of its technology. In addition to prosthetics applications, CTRL Labs believes its technology can also help with the diagnosis and treatment of nervous system disorders. Diseases like Parkinson's, schizophrenia, ALS, and depression all have a strong signal related to muscle and movement as symptoms emerge and persist. Using strong, accurate EMG recording could provide early warnings and assist in rehabilitation from these conditions.