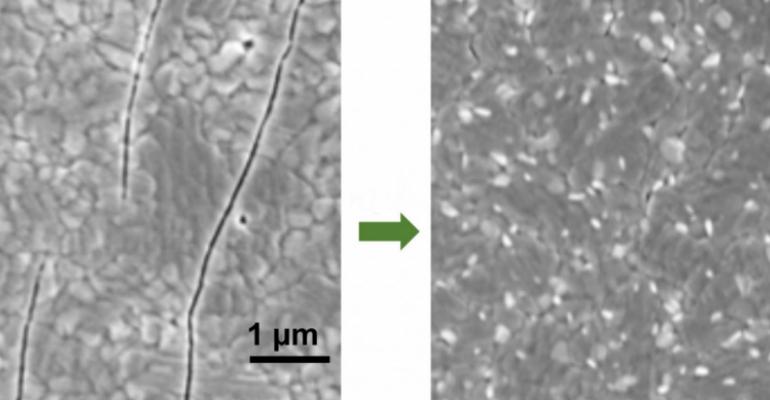 A team from Brown University may have discovered a way to remove one drawback from the future, long-term use of thin-film solar cells.

Researchers are eyeing materials called perovskite for the next generation of thin-film-based solar cells because of the cost and other advantages they have over silicon. However, one drawback to these films is that they tend to crack easily, an issue that researchers at Brown University think they may have solved.

A team in Brown’s School of Engineering have discovered that these cracks can easily be healed through compression or heat, paving the way for the possibility of long-term use of cells made out of this material without the worry of degradation.

“Everybody’s chasing high efficiency, which is important, but we also need to be thinking about things like long-term durability and mechanical reliability if we’re going to bring this solar cell technology to the market,” Nitin Padture, a Brown professor of engineering, said in a press statement. “That’s what this research was about.”

Scientists first used perovskites—a broad class of crystalline materials—into solar cells in 2009, achieving an energy-conversion-efficiency rate of 4 percent. Now that efficiency rate has reached 25 percent, which is on par with silicon cells.

Considering this with the distinct advantage of the materials--that they can be made for a mere fraction of the cost of silicon cells—and scientists believe perovskites are the future of solar energy.

Moreover, the thin-film form factor for which perovskites are well-suited also can be used to develop novel solar-energy-generating technologies, such windows, or for lightweight, flexible solar cells that can be used in tents or backpacks.

The Cost of Low-Cost

The phrase “you get what you pay for” exists for a reason, and perovskite thin-film solar cells are an example of this, Padture noted.

“In material science, things that are easy to make also tend to be easy to break,” Padture, also the director of Brown’s Institute for Molecular and Nanoscale Innovation, observed in a press statement. “That’s certainly true of perovskites, which are quite brittle.”

His team now has demonstrated that these cracks can be fixed without too much trouble, removing one of the challenges to more widespread adoption of perovskites, he said.

The team proved its theory that cracks could be healed using compression in a multi-step process. First researchers deposited perovskite films on a plastic substrate, then they bent the substrate to put tensile stress on the film while using a scanning electron microscope (SEM) to detect cracks.

Once a crack was identified, researchers then bent the substrate in the opposite direction to see if compressive stress might heal it, they said. Viewing the film using SEM imaging proved that the cracks had disappeared.

To ensure that the cracks had indeed healed and weren’t just hidden, researchers than used a technique called X-Ray diffraction, which measures the size of a material’s atomic lattice. This method can reveal whether a formerly cracked area now can carry a mechanical load, proving that the cracks were actually repaired. X-ray diffraction tests the team conducted showed that the cracks indeed were fully healed.

Researchers published a paper on their findings in the journal Acta Materialia.

While the work shows promise toward a better understanding of how perovskites might hold up over time, Padture acknowledged that much more needs to be done to apply his team’s work to the commercialization of perovskite cells.

Still, “it’s good news,” he said in a press statement. “It suggests that fairly simple healing methods may help maintain performance in these kinds of solar cells.”