Could China's Raw Materials Strategy Leave US Automakers Behind? 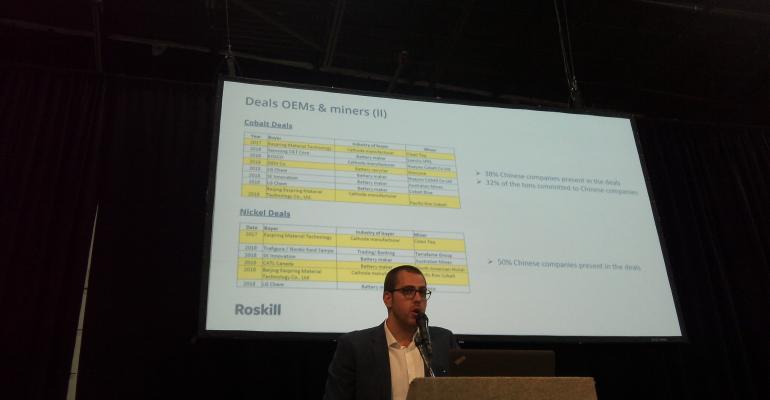 Chinese OEMs are teaming with miners to keep battery costs in check. Analysts suggest that US and European companies could face risks if raw material prices continue to rise.

Chinese electric car and battery manufacturers are aggressively teaming with raw material suppliers to keep future costs in check. Some experts at this week’s Battery Show suggested that those efforts could give them a leg up on automakers in the US and Europe.

“China is definitely ahead because they have the manufacturing capacity and because they have the raw materials controlled,” said Jose Lazuen, an electric vehicle and supply chain analyst for Roskill, a market research company. “This is something the European and North American OEMs haven’t done. They don’t have the capacity and they don’t have the raw materials controlled.”

Lazuen cited a number of Chinese OEMs and suppliers, including BYD Auto Co. Ltd., CATL Ltd., OptimumNano Energy Co. Ltd., Ganfeng Lithium Co. Ltd., and Beijing Easpring Technology Co., Ltd. He noted that all have formed partnerships with miners around the world to better control the acquisition of lithium, cobalt, and nickel. Lazuen added that he saw “absolutely no North American or European OEMs present in the deals with miners.”

China’s business relationships are so aggressive, he said, that it’s almost “too late” for automakers in other regions of the world to catch up now. “The North American and European companies are not at the same level as the Chinese OEMs,” Lazuen stated. “They’ll face problems if raw material costs increase at some point.”

Chinese suppliers at the show said they view relationships with miners as a necessity, given the volatile and unpredictable nature of the market. “The only way you’re going to (get control) is to have a mindset to get ahead of the game by buying rights to those minerals to keep the prices down,” noted Robert Galyen, chief technology officer of CATL, a China-based company that is now the biggest battery manufacturer in the world.

The question of future metal costs is a growing concern, experts said this week, because lithium, cobalt, and nickel will continue to play key roles in future electric car batteries. One speaker at the show noted that the price of cobalt rose 130% last year, while lithium climbed by 50% and nickel was up 28%. If those increases continue, raw material costs could negate any economies of scale that might otherwise be gained through increases in production volume. As a result, it would be difficult for automakers to bring the pack costs of batteries below the $150/kWh level, experts said.

Not a Major Concern?

To be sure, however, not all of the speakers at the show believed that the situation is so dire for European and US-based electric car makers. Raw material costs are cyclical, they said, and could just as easily fall as rise. “We’re not worried about short term trends and speculations,” noted Ted Miller, senior manager for energy storage research at Ford Motor Co. “We’re more concerned about the timing to bring mining and processing operations online.” He said that lithium is not seen as a potential problem because it is fairly abundant, but acknowledged that the limited reserves of cobalt could be a concern. Miller added, however, that the US Department of Energy is working with automakers and battery manufacturers on technologies that would enable the elimination of cobalt from battery cathodes.

Asad Farid, associate director of Berenberg Bank, agreed that there was no need for US and European automakers to panic at this point. “I do understand their concerns,” he said. “But when you look at the supply side for lithium and cobalt, I don’t think they should be worried. Prices are already correcting; Cobalt is down by 20% just in the last three months.”

Either way, China will continue to strike deals with miners, experts said. Electric cars and batteries have become a central issue of national business policy in China, and the country expects sales to soar—starting inside its own borders. As a result, leaders there want to eliminate any uncertainties regarding raw materials.

“They see this as a business opportunity,” Lazuen said. “China wants to become the world leader in transport electrification.”