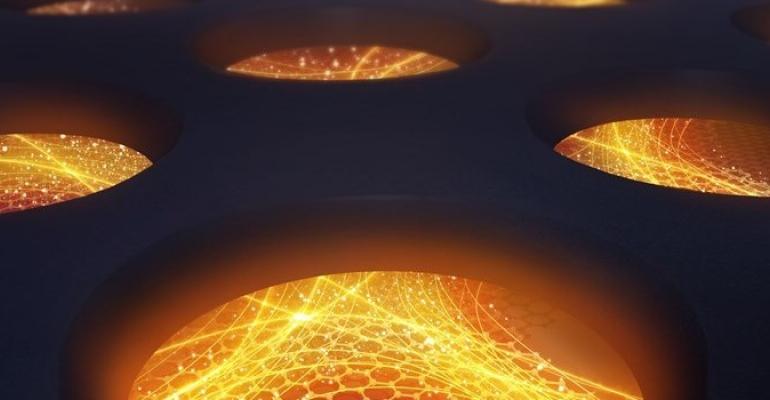 Researchers in Denmark have solved a problem in controlling the properties of graphene, paving the way for future development of nanoelectronics.

Researchers long have known that graphene is a useful material for next-generation electronic applications because of its light weight and high electric conductivity.

Now researchers in Denmark have solved one of the biggest challenges in the way of developing useful and effective graphene-based nanoelectronics, paving the way for future design of these devices, they said.

A team at The Center for Nanostructured Graphene at DTU Physics and Aalborg University has solved a simple but key problem with using graphene for nanoelectronics by figuring out how to induce a band gap, which is crucial for making transistors and optoelectronic devices, they said.

Every Atom is Critical

The historical problem has been that since graphene is ultra-thin—only an atom thick—all of the atoms in the material are so critical that even tiny irregularities in the pattern can destroy its properties.

So while one of graphene’s key properties is that it’s excellent for conducting an electrical current, making patterns in graphene to match a design—such as for an electronic device—can introduce so much “disorder and contamination that it no longer behaves like graphene,” said Peter Bøggild, professor at DTU Physics who led the research.

"It is a bit similar to making a water pipe that is partly blocked because of poor manufacturing,” he said. “On the outside, it might look fine, but water cannot flow freely. For electronics, that is obviously disastrous.”

Two postdocs working with Bøggild, Bjarke Jessen and Lene Gammelgaard, came up with a solution to this problem by first encapsulating graphene inside another two-dimensional material—hexagonal boron nitride, which is non-conductive and often used for protecting graphene’s properties.

Next, they used a technique called electron beam lithography to pattern the protective layer of boron nitride and graphene below with a dense array of holes with a diameter of about 20 nanometers. The holes have just 12 nanometers between them; however, the edge of the holes has a roughness that is less than 1 nanometer, or a billionth of a meter.

Control of the Design

This unique design allows 1000 times more electrical current to flow than previously had reported in such small graphene structures, researchers said. Moreover, the technique also enabled researchers to control graphene’s band structure and design how it should behave, which gives them access to all of graphene’s properties and allows for that elusive band gap, Bøggild said.

“We found to our surprise that some of the most subtle quantum electronic effects survive the dense patterning—that is extremely encouraging,” he explained. “Our work suggests that we can sit in front of the computer and design components and devices—or dream up something entirely new—and then go to the laboratory and realize them in practice.”

Researchers published a paper on their work in the journal Nature Nanotechnology. Bøggild said the research gives new hope to most scientists who “had long since abandoned attempting nanolithography in graphene on this scale.”

“Nanostructuring is a crucial tool for exploiting the most exciting features of graphene electronics and photonics,” he said. “Now we have figured out how it can be done; one could say that the curse is lifted.”

While there are still challenges to using graphene for the development of nanoelectronics, Bøggild said the research shows that scientists can tailor the electronic properties of graphene, which is “a big step towards creating new electronics with extremely small dimensions.”

"Graphene is a fantastic material, which I think will play a crucial role in making new nanoscale electronics,” he added.