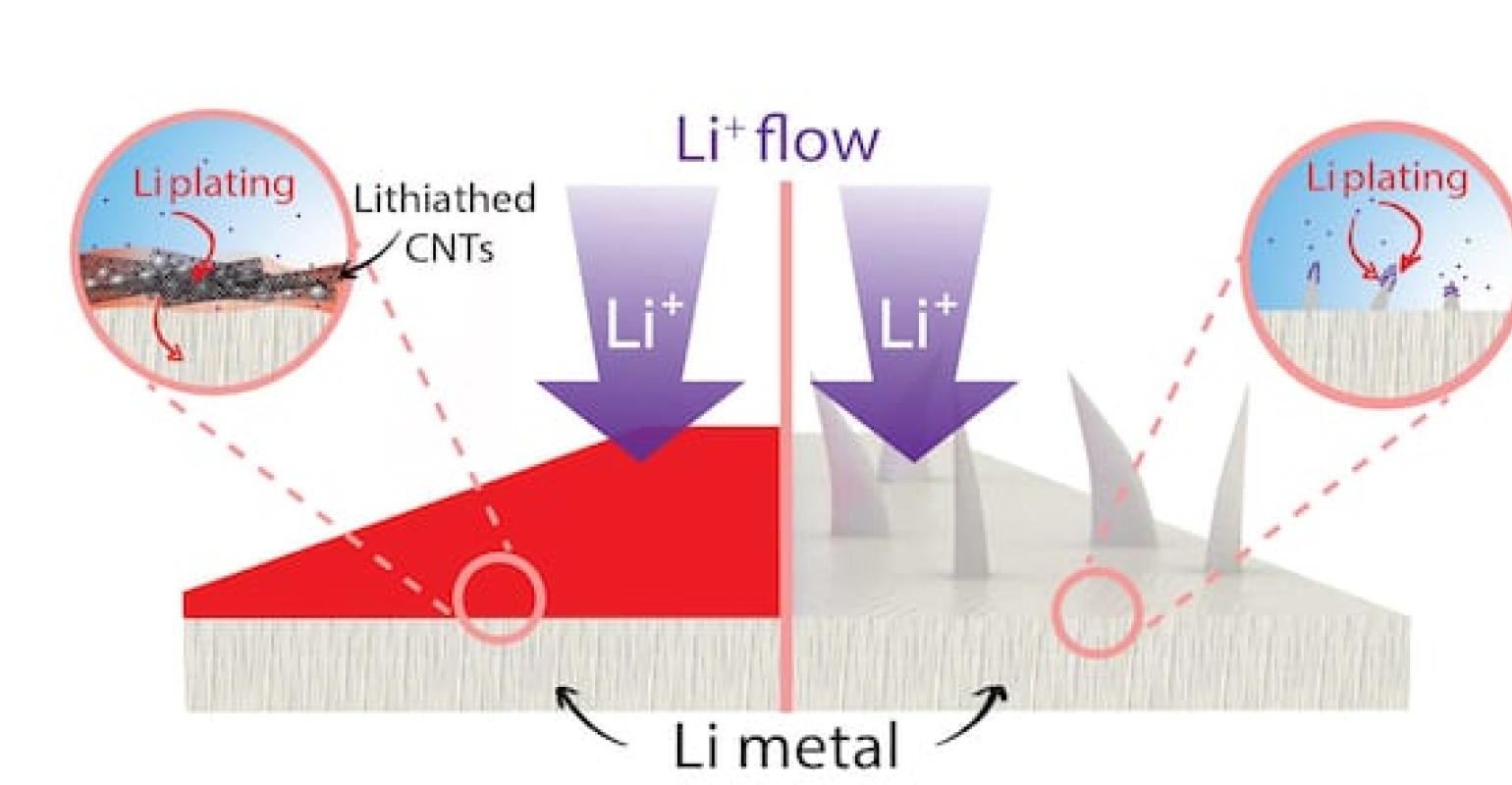 If a way could be found to eliminate the growth of dendritic crystals during charging, batteries with lithium metal foil anodes (negative electrodes) could provide at least two to three times the energy storage capacity of existing commercial lithium ion batteries. The crystals, called dendrites, form needle-like structures that can grow sufficiently to reach the cathode (positive electrode), causing a short that can destroy the battery and result in a fire.

Among the efforts to suppress dendrite formation have been the use of semi-solid or solid polymer or ceramic electrolytes to replace the liquid organic solvents used in present lithium ion batteries, as well as a variety of coatings and transition layers. One such attempt at providing a coating has come from Rice University. According to a Rice news release, a team in the lab of chemist James Tour has created a carbon nanotube coating that seems promising.

Carbon nanotubes are seamless tubes that are made from one or more sheets of graphite. They have diameters as small as 1 nanometer (nm) and can be up to several centimeters (cm) long. Discovered in 1991, they are finding use in applications as diverse as structural materials and drug delivery systems. In the Rice University study, multi-walled carbon nanotubes were deposited on lithium metal that formed the anode of a test battery. The cathode in the test was made from sulfurized carbon.

In earlier work, the Rice University lab had determined that an anode made from graphene and carbon nanotubes suppressed dendrite growth. But this latest work is much simpler and less expensive. “What we’ve done turns out to be really easy,” professor Tour said in the Rice news release. “You just coat a lithium metal foil with a multiwalled carbon nanotube film. The lithium dopes the nanotube film, which turns from black to red, and the film in turn diffuses the lithium ions.”

The physical contact of the carbon atoms with the lithium metal reduces the nanotube film, but balances it as the metal adds lithium ions and the ions redistribute themselves throughout the nanotube film. The news release states, “When the battery is in use, the film discharges stored ions and the underlying lithium anode refills it, maintaining the film’s ability to stop dendrite growth.”

In Rice University team tests, the tangled nanotube film effectively quenched dendrites over 580 charge/discharge cycles of a test battery. The full lithium metal cells retained 99.8 percent of their coulombic efficiency (a measure of how well electrons move within an electrochemical system).

Another advantage of the carbon nanotube coatings is the ability to rapidly charge the lithium metal battery. “The capacity of these batteries is enormous, but what is equally remarkable is that we can bring them from zero charge to full charge in five minutes, rather than the typical two hours or more needed with other batteries,” Tour said. Rapid charging is generally considered one of the requirements for the further acceptance of EVs by the general public. The research by Rice University might be a step in the right direction in the goal of electrification of the transportation system.