HomeElectronicsBoston Dynamics Is Now Selling its 'Spot' Robot
Recent
Electronics
Mercedes-Benz Sustaineer Concept Electric Van Scrubs the Air While it Drives
Oct 28, 2021
Spooky Halloween Tech Is Here. Just Look at These Doozies
Oct 27, 2021
Halloween? What a Perfect Time to Think About Generating Electricity From Blood!
Oct 27, 2021
Ghosts of Medtech: What Ever Happened to These 7 Medical Devices?
Oct 27, 2021
POLL
How to Survive a Zombie Apocalypse
Oct 27, 2021
America's Supply Chain Crisis by the Numbers
Oct 27, 2021
Want Scary Stuff for Halloween? Check out the Tech for 2021
Oct 27, 2021
How Apple Influenced Medical Packaging
Oct 27, 2021 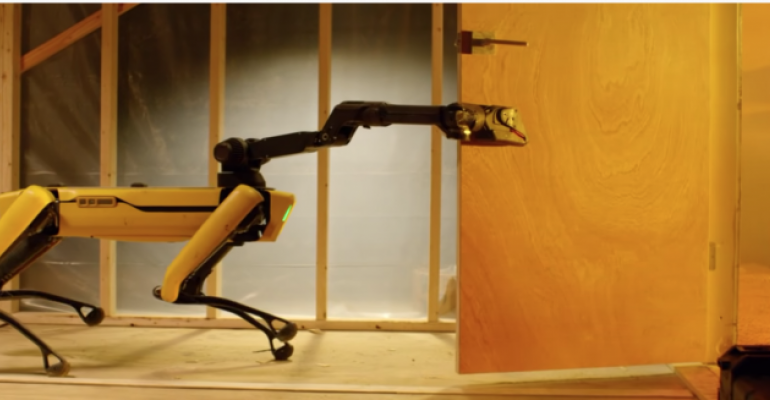 Boston Dynamics has announced that its dog-like robot Spot has officially gone on sale. In addition the company unveiled some new mobility advancements from its Atlas humanoid robot.

Boston Dynamics raised a lot of eyebrows earlier this year when it announced it would be making one of its robots commercially available by the end of this year. But this week the company officially announced that its dog-like robot, Spot, is now available for order via the company website.

Spot is a four-legged, animal-like robot that the company is pushing less as a singular-use machine and more as a customizable platform that can be adapted to a range of tasks. The base unit has sensors and cameras allowing for 360-degree vision for navigation (including rough terrain and climbing stairs) and obstacle avoidance. It can move at a speed of 1.6 m/s, carry a payload of up to 14 kg (about 31 lbs), and run for 90 minutes on one charge of its swappable battery. It can be operated via remote control or function autonomously.

Where Boston Dynamics hopes the value for Spot will be found is in its level of customization. Spot can be customized with the addition of hardware, such as an articulating grabber arm, or with specialized sensors. The company has also released two software development kits (SDKs) along with Spot. One SDK will allow developers to program custom applications and also access sensor data from the robot. The second SDK, the Autonomy Software Development Kit, will give engineers access to Spots mapping, navigation, and mission editing systems to program custom autonomous tasks into the robot.

According to Boston Dynamics, early adopters are already using Spot for monitoring construction sites, remote inspection, and in public safety applications. There is no immediate information available on Spot's pricing but it is rumored to be in the tens of thousands. In an interview with IEEE Spectrum, Boston Dynamics' VP of business development Michael Perry said that due to the short supply of units not just anyone will be able to get their hands on the robot however. Perry told IEEE the company wants to focus on customers that, “either have a compelling use case or a development team that we believe can do something really interesting with the robot.”

Boston Dynamics also released the latest of its now infamous YouTube videos showing off its robots' capabilities. This time the company revealed some of the latest developments with its Atlas humanoid robot. Seen in previous videos running and jumping over and around obstacles, moving boxes, and generally being picked on to test its robustness, Atlas is now capable of performing basic gymnastic routines. In this latest video Atlas performs a handstand, turning jumps, along with a few other moves.

According to the company these new strides in mobility were accomplished by using new techniques that have streamlined Atlas' development process. “First, an optimization algorithm transforms high-level descriptions of each maneuver into dynamically-feasible reference motions. Then Atlas tracks the motions using a model predictive controller that smoothly blends from one maneuver to the next,” the company said. “Using this approach, we developed the routine significantly faster than previous Atlas routines, with a performance success rate of about 80%.”

To date Boston Dynamics has not revealed any plans to make Atlas available to partners or as a commercial product.