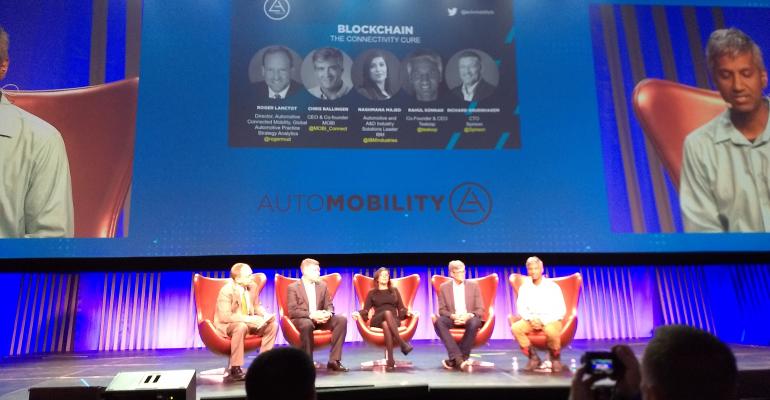 An expert panel at Automobility LA outlined the major challenges for Blockchain going forward in the automotive industry and in enterprise as a whole.

Speaking as part of a panel, “Blockchain: The Connectivity Cure” during the Automobility LA conference and expo, Naghmana Majed, Automotive and A&D Solutions Leader at IBM, offered some sobering commentary on the state of Blockchain.

“I see a lot of hype with Blockchain,” Majed said. “[But] we have to make some conscious decisions and ask, is this a good use case.”

Majed's comments went to the core of what Blockchain technology as a whole has been grappling with—even beyond the automotive space. With the value of Bitcoin no longer skyrocketing, Blockchain is still looking for a killer use case. And while there is plenty of excitement about applying the distributed ledger technology beyond cryptocurrency and into enterprise and commercial applications, the Automobility LA panel noted some significant challenges ahead.

At the end of the day, companies have to make a profit, and any new technology needs to facilitate this in some way.

“What's the business model?” Majed asked. “If you can do the same thing in a more expensive way, does that make sense? Is there a clear business model in the domain of new businesses and opportunities?…We do a lot of work in supply chain. But that's cost cutting. We have to look at automotive and ask if we can provide a real business model and new revenue opportunities. Technology for the sake of technology does nothing.”

Fellow panelist Rahul Sonnad, co-founder and CEO of Tesloop (developer of an open-source software platform for connected vehicle sharing), echoed Majed's comments. “You don't need blockchain for mobility [applications]," he said. "I don't see a business model [blockchain] enables that you can't do without it.”

Does It Help with Trust?

Chris Ballinger, CEO and co-founder of the Mobility Open Blockchain Initiative (MOBI)—a consortium of automakers and tech companies collaborating to apply Blockchain to the automotive industry—told the audience that he believed the biggest offering for Blockchain was the trust provided by the additional layers of encryption and security afforded by Blockchain's decentralized structure. “Centralization works fine as long as you trust the person in the middle,” Ballinger said. “Blockchain is cheaper, but also in a way that can be trusted.”

Playing Devil's Advocate, Sonnad questioned whether additional trust is really such a significant value proposition. “Businesses have been trusting each other for thousands of years. That's not the fundamental problem with mobility.”

But Ballinger countered that the increasing number of mobile devices, as the Internet of Things (IoT) moves toward one trillion connected devices, is creating a need for new levels of automated trust and accountability. He noted that one of the original use cases for Blockchain's smart contracts, proposed as far back as a 1996 research paper, was the automatic transfer of an auto title or lease.

Ballinger pointed to the infamous Nigerian Prince email scams as an example of this need for trust. More and more connected devices (and vehicles) means more and more opportunities for malicious parties to try and infiltrate or hack these machines. There's a chance a real Nigerian Prince could be trying to offer you large sums of money, he said, but you still need to be able to recognize a fraud.

“Blockchain can bring a lot to the table in terms of all the connected devices,” Ballinger said. “In a machine-to-machine economy, it's not going to take us long to get to a trillion connected devices. How will those devices know the Nigerian Prince from a scammer?”

Where Are the Standards?

One issue the panel did agree on was the need for standards around Blockchain. “The challenge of Blockchain is that everyone in the value chain has to participate,” Rick Gruehagen, CTO of Spireon (a provider of connected vehicle and fleet tracking technologies), told the audience. “Everyone has to embrace it if it's going to work.”

Both Gruehagen and Ballinger discussed the potential of Blockchain in supply chain and fleet management for this very reason. In the fleet industry, Gruehagen said, everything revolves around a chain of custody around the shipment of goods and all of the inherent transfers that happen, making it an ideal use case for Blockchain.

“One reason supply chain is such a good application [for Blockchain] is because of how you can get everyone involved,” Ballinger added, noting that a big part of MOBI's overall mission is developing application layer standards for OEMs to share.

Tesloop's Sonnad later took things a step farther, encouraging companies to consider open source as a means of easing the path of Blockchain adoption for developers. “I think open standards and source code is the right place to start,” he said. “[Imagine] if you go forward 10 years and Blockchain is as easy to develop on as, say, .Net or Linux.” For Sonnad, creating a Blockchain that is standardized and also cheap, easy, and fast to develop on is key.

Where Do We Start?

Where, then, are the best applications for Blockchain right now? All of the panelists encouraged developers to look at simpler use cases that can lead into broader applications first. Sonnad joked that his company calls its application of Blockchain the “Mockchain” because of this. “It's the smallest use possible of the Blockchain," he said. “It's a little bit valuable, but it's very cheap and it sets the stage for broader deployment.”

“I wouldn't tell anyone to sit on the sidelines, but I would also recommend that people take a bit of a back step and start with a case that will give you immediate business value," IBM's Majed said. She encouraged OEMs to look at three key factors: technology, scalability, and performance. “Technology is evolving," she said. “Start small and with something that will give you a quick return on value and build your own expertise and capabilities and expand on it...For OEMs, finance is a good area to start with...Test it out to see how it works.”

She also discussed work that IBM has been doing in the mobility space. One project uses Blockchain to transform a connected vehicle into a sort of car wallet, in the same way Apple Pay and Android Pay transform smartphones for the same purpose. The idea, she explained, is to enable mobile payments for transactions like toll roads and to also facilitate cars being used more as a platform.

“How can we enable that kind of mobility in car sharing, where the car becomes a platform where other providers can provide a service?” she asked. Blockchain could also be used to provide secure and trusted over the air software updates to vehicles. But Majed cautioned that for all of this to happen, “the scalability and performance needs to catch up to have the low latency and speed needed for connected vehicles.”

All panelists agreed that a trust-less, decentralized economy is coming. But ultimately, the panelists said, it will be up to OEMs to decide to what degree this will take effect. It will all depend on companies' need for trust and compliance, their business network, and, of course, the value proposition. “If you want to create something out there and no one owns it or controls it, Blockchain is the best way,” Sonnad said.